Social care betrayal: Poorer pensioners and those in the North will lose out under Boris Johnson’s plan to cap care costs, small print shows

Reforms to elderly care will be far less generous than previously thought, it emerged last night.

The smallprint of Boris Johnson’s cap on care costs, published quietly yesterday, reveals that poorer pensioners in particular will lose out.

Details show that the value of state support given to the less well-off will not be included when the cap is calculated, so they will have to spend more of their own money on care before they reach the £86,000 lifetime limit.

This restriction had been rejected by original social care cap architect Andrew Dilnot as unfair – but will likely save the Treasury £500million. 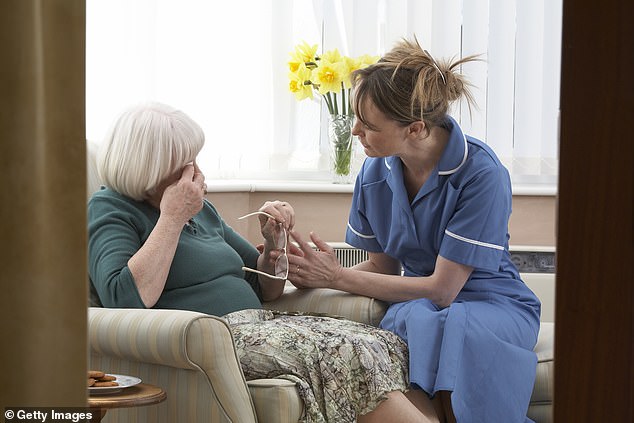 The smallprint of Boris Johnson’s cap on care costs, published quietly yesterday, reveals that poorer pensioners in particular will lose out (stock image)

Labour’s care spokesman Liz Kendall said: ‘This smallprint, sneaked out today under a cloud of Tory sleaze, shows Boris Johnson’s so-called cap on care costs is an even bigger con than we initially thought.

We already knew most people won’t hit the cap because it doesn’t cover board and lodging in care homes, and that at £86,000 the cap would still mean many people will have to sell their homes to pay for their care – against everything Boris Johnson promised.

‘It has now been revealed that the poorest pensioners will have to pay even more, something Andrew Dilnot – who proposed the cap – explicitly ruled out because it was so unfair.

‘That this Tory government has failed to be straight with those who’ve given so much to our country is a total disgrace, but utterly unsurprising. Our elderly people deserve better.’

The ‘further details’ of the long-delayed shake-up of social care were published yesterday, more than two months after the PM announced that National Insurance would rise to pay for the £5.4billion reforms.

It had been hoped that the imposition of a cap on lifetime care costs would spare many pensioners the prospect of having to sell their homes to pay for residential care.

But the policy paper reveals that it is less likely to benefit those who currently get free support from the State under a means test, because that contribution will not be included in deciding when they have reached the cap.

So a poor pensioner receiving state support would have to spend £86,000 of their own money on extra care before they were deemed to have hit the limit.

The policy paper states: ‘This amendment, subject to Parliamentary approval, will ensure that only the amount that the individual contributes towards these costs will count towards the cap on care costs, and people do not reach the cap at an artificially faster rate than what they contribute.’

It adds that a new ‘much more generous means test’ – which increases to £100,000 from £23,250 the amount elderly people can hold in assets before they have to pay for all their care themselves – ‘is the main means of helping people with lower levels of assets’.

The document also shows that board and lodging in care homes will cost £200 a week. Because this does not count towards the cap, anyone who lived in a care home for three years would have to pay £31,200 for the accommodation even if they had already hit the cap in care spending.

Torsten Bell, chief executive of the Resolution Foundation think tank, was among the first to spot the significance of the new report and said: ‘The big change is to reduce how much protection the cap provides to those with fewer assets, by making it less likely that they could benefit from the cap.’

He claimed the shift ‘could double your care costs if you’ve got around £90k but makes no difference to someone with £500k who gets almost all their assets protected’.

It is likely that the unexpected change, to be voted on by MPs next week, will particularly affect poorer pensioners in the so-called ‘Red Wall’ seats won by the Tories.

Mr Bell said: ‘I’m really not sure the Government’s thought this through. They might not actually win the vote next week, Conservative MPs in the North and Midlands have just been told the cap on care costs will do far less for their constituents who could still lose almost everything.’

Caroline Abrahams, charity director at Age UK, said: ‘When this change is factored in it becomes clear that the cap will disproportionately benefit those living in the South, rather than the North, where house prices are that much lower, flying in the face of the Government’s “levelling up” agenda.’