Dan Springer reports on the fallout from Portland’s police cuts amid a surge in violent crime.

Police in Portland, Oregon, declared a riot in the northwest part of the city late Friday night after rioters began smashing windows, tagging graffiti on buildings and broke into a restaurant.

A resident who was filming the mayhem had a rock thrown through his window by a rioter, police said.

The unrest came after Portland Mayor Ted Wheeler extended the state of emergency in the city through the weekend over possible continued unrest, according to FOX 12 of Oregon.

The Portland Police Bureau said the planned protest that had been billed as an “autonomous demonstration.” It started around 9 p.m. PT with around 75 protesters dressed all in black who started vandalizing property around 15 minutes after they began marching from a park near the city’s downtown. 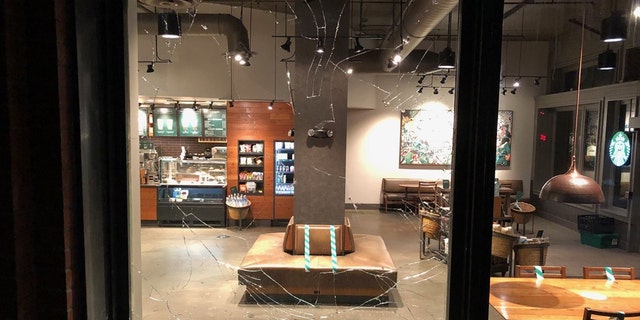 Police said they issued dispersal orders that were largely ignored and two people were arrested and booked into the Multnomah County Detention Center.

The riot follows similar unrest this week spurred by the conviction of ex-Minneapolis police Officer Derek Chauvin in the May 2020 death of George Floyd and other fatal police shootings in Minnesota, Ohio and North Carolina.

“Tonight, the anarchists have called for more destruction,” Wheeler said in a news conference Friday afternoon announcing the emergency extension, according to KGW-TV in Portland. “I’ve directed the police bureau to arrest and engage illegal activity whenever they can safely do so.”

The emergency declaration, which allows the mayor to issue a curfew or close streets, ends at noon on Monday, FOX 12 reported.

Portland has experienced near-constant rioting since unrest began in Minneapolis over Floyd’s murder nearly a year ago.