Bill Sykes knows the emotional toll of being on the front line of a foot and mouth disease outbreak. He can still remember how the slaughterers would let the bobby calves suck on their fingers like a teat, tenderly winning the animals’ trust before humanely killing them.

Sykes estimates thousands of animals were slaughtered under his supervision when he flew to England in 2001 to help contain the horrific outbreak. 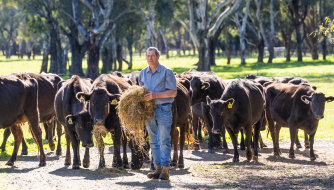 Former Nationals MP Bill Sykes flew to the UK in 2001 to help contain the foot and mouth disease outbreak.Credit:Jason South

Sykes, a former regional vet officer in the Victorian Agriculture Department, said slaughterers handled the animals with compassion. But befriending the calves only to slaughter them moments later took its toll.

“You use that trust to then humanely destroy them,” he said. “I found that pretty hard to watch.”

But the recent rapid spread of foot and mouth disease in Indonesia combined with the detection of virus fragments on food at the airport and within imported pork products in Melbourne have put authorities on high alert for an outbreak in Australia.

After concerns escalated during the week, the federal government announced on Friday that travellers returning from Indonesia will have to clean their shoes and walk over sanitation mats under the toughest biosecurity rules ever introduced at Australian airports.

Authorities are desperate to avoid the heartbreaking scenes seen in the UK in 2001 when more than 6 million pigs, cows and sheep were destroyed.

Sykes spent six weeks in the Yorkshire Dales in northern England working with farmers to contain the disease.

In some cases, farmers urged him to use barbiturate injections to euthanise their animals even though inserting needles into the veins of poorly restrained 1000-kilogram bulls was difficult and stressful.

His voice cracks with emotion as he recalls cradling small lambs, so they could be injected with a lethal substance in their chest.

“They’d go limp in your arms,” he said. “You do that with a few lambs and see how you’re travelling in your head.”

Sykes said Australian authorities should be assembling a reserve contingent of retired veterinarians who could form part of the disease detection effort and supervise animal slaughters if there was a local outbreak.

He said it was crucial that Agriculture Victoria officers worked closely with local communities, including regularly communicating with cafes to ensure they were not providing food scraps containing meat to pig farmers. 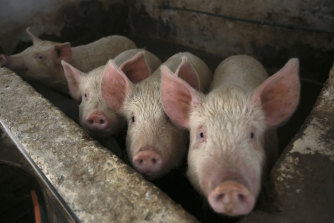 It is illegal to feed pigs food scraps with animal products, a process known as swill feeding, which is believed to be the source of the 2001 UK outbreak.

Pig farmer Tim Kingma said hobby and small-scale farmers potentially posed a biosecurity risk because some may be unaware swill feeding was illegal.

“They think they’re doing the right thing feeding scraps to their pigs,” he said.

Thomas Elder Markets analyst Andrew Whitelaw was a teenager living in Scotland when the disease hit and recalls the smell of burning carcasses lasting weeks. 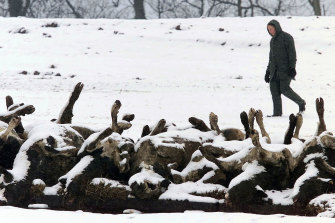 The UK’s foot and mouth outbreak in 2001 cost about $19 billion.Credit:AP

Whitelaw, who now lives in Australia analysing the agriculture sector, said communities in the UK are still grappling with the aftermath of the disease outbreak.

“We had farmers who sold up and decided agriculture wasn’t for them,” he said. 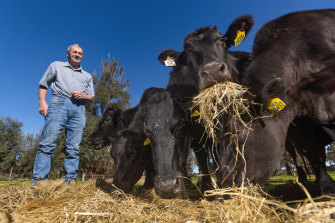 Bill Sykes on his farm in Benalla. Credit:Jason South

“You would see the killing of animals immediately on the properties where [the virus] was detected,” she said.

Germano said the virus was being transmitted quickly in Indonesia because the animals were considered “naive”, which means they had not been exposed to the virus through transmission or vaccines.

She said it was mandatory for farmers to report suspected cases of the virus to authorities.

Sykes has kept in touch with some farmers whose livestock he had to destroy, including one farmer who pleaded with him to save a small flock of sheep with highly valued genetic stock.

Twenty years later, Sykes is proud that he managed to spare those sheep amid the carnage, providing a rare emotional respite for the farmer.

“I believe that farmer was at high risk of taking his life,” he said. “I saved 30 or 40 sheep but killed thousands.”