At his lowest ebb Alex Levonis, 30, counted 40 people in the line in front of him waiting to inspect a rental apartment in Carlton North.

“It was a pretty dingy one-bedroom apartment with no natural light, and there was a balcony that was facing another building. It was cold. And there were 40 people waiting to look at it.” 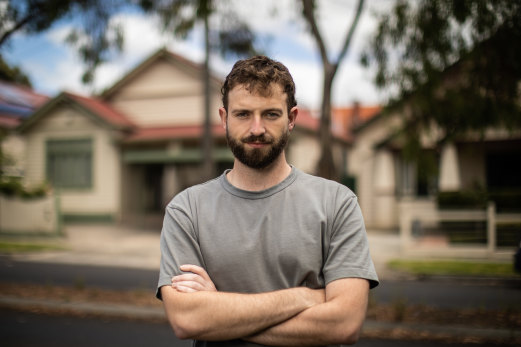 As Melbourne’s rental market contracts, queues like this are increasingly common. At one inspection on Wednesday, a whopping 72 people turned up.

There has never been a tougher time to be a renter in Melbourne, where vacancy rates are just 1.4 per cent and rents have hit record highs.

The median weekly cost of renting an apartment in Melbourne last week hit $450 – a 20 per cent increase on 12 months earlier – while in inner Melbourne rents have reached a weekly median of $490 a week, according to the Domain Rent Report for the December quarter.

The most recent Australian Bureau of Statistics figures, taken in August, showed the median weekly income in Melbourne was $1300 (across Victoria the median was $1250). Rental stress is defined as paying more than 30 per cent of one’s income in rent, meaning for a single renter on a median wage in Melbourne, anything more than $390 a week would put them in rental stress. 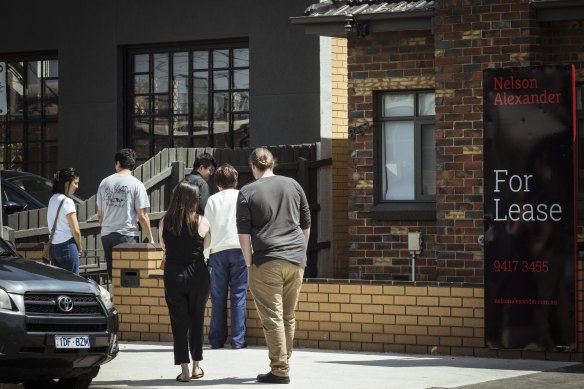 Vacancy rates are just 1.4 per cent in Melbourne, where rents have hit record highs.Credit:Chris Hopkins

Education support worker and single mum Janette has rented her home in Melbourne’s outer suburbs for three years. Late last year, her landlord raised the rent from $1800 to $2046 a month.

“Now every month I struggle with everything,” she said.

“I never have any money for food [or] new clothes that [my kids] are growing out of. I’ve lost that much weight as I’m not eating, my son is getting diagnosed with autism and [sensory processing difficulties] and now I can’t afford for him to see a paediatrician or other specialists to support him … I can’t afford to pay any other bills, as all my income goes towards the rent. I can’t remember the last time that I took the kids out to do anything.

For Levonis, who had just three weeks to find a new apartment late last year, the process of finding a new home in a bitterly competitive market was exhausting.

“The actual toll was pretty traumatic,” he says. “It was just taking up all of my time when I wasn’t working; it was taking up all my thoughts. It felt like I was just making no progress at all.” 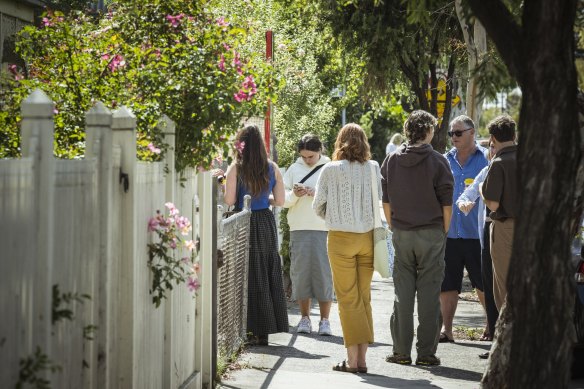 Hopeful tenants queue at an open for inspection in Brunswick on Saturday.Credit:Chris Hopkins

After three frantic weeks of searching, Levonis found a new apartment on Facebook Marketplace, moving on the last day of his previous tenancy. He believes if he was still going through real estate agents, it would have taken months longer.

Actor Celia Handscombe, 35, has been looking for a room in a share house since August last year, and more intensively since October. She’s staying at a neighbour’s home, after house-sitting three properties over the Christmas-New Year period.

“The prolonged stress and instability of all this has certainly taken a toll on my mental health.”

The Age was inundated with renters sharing their experiences of trying to find a home in what is now a landlord’s market.

One woman told of her partner having moved out of a “slug infested, completely rotted Victorian house in Carlton”.

“There were leaks in every room, holes in the floor and constant mice/ant infestations. The hallway would be a slip and slide every time it rained,” she said.

After her partner moved out, the former share house – for which he and his housemates paid $3000 a month – was listed for $4550 a month.

Another — 29-year-old disabled woman Anni Quinn — said trying to find a share house on a low income was “humiliating”.

She lives with two autoimmune diseases that make it difficult to hold down a job. Quinn was technically employed, but hadn’t worked in three months.

“You’re written off completely,” she said. “As soon as you say you don’t work, people don’t even reply to you.”

Quinn said the tight market put her in a situation where she had to share private, sensitive information with strangers; only to get ghosted.

“It’s like I’m not worth anyone’s time,” she said.

“We are severely under-funded, and we can respond to about 20 per cent of the phone calls that come through to us,” she said. “We just can’t help everybody who needs our help.”

Richmond resident Michelle Kane was “very stressed” about the prospect her landlord would hike her rent when the lease was due to end in March.

Her neighbours recently left an identical apartment two doors down, and it was soon relisted with an asking rent $400 per month, more than the outgoing tenant was paying.

“We expected our rent to go up that much,” Kane said.“The whole floor was talking about it.”

She felt lucky to be offered a renewed lease with a $100 per month increase — a comparatively merciful hike.

Rental increases of more than $300 a month are common. “Sarah”, who asked her for name to be withheld, in December had her rent increased by $100 a week.

“I work full time and had to get a second job just to be able to live comfortably again,” she said.

“It sucks; I don’t have any spare time, but that’s what you have to do, I guess.”

Levonis said hunting for a home had left him with a profound feeling of hopelessness and empathy for others in his situation.

“I feel like one of the lucky ones because it doesn’t make sense when you see how many people are looking for houses and how few places are available.

“When you do the maths it just doesn’t seem to make sense. I actually don’t understand how all those people are finding places to live.”