Russia is building a nuclear command post where Vladimir Putin could control the country’s doomsday weapons in the event of World War III, he announced today.

Putin said the ‘absolutely secure facility’ is ‘nearing completion’ and would keep the Kremlin in control of its atomic weapons ‘even in the event of a nuclear strike’.

The Russian president told his defence chiefs to keep upgrading their control systems ‘no matter how modern and advanced they may be today’.

Moscow has an estimated stockpile of 6,375 nuclear warheads, compared to 5,800 for the US, and Putin has called for a ‘new security equation’ amid fears of a new arms race with Washington. 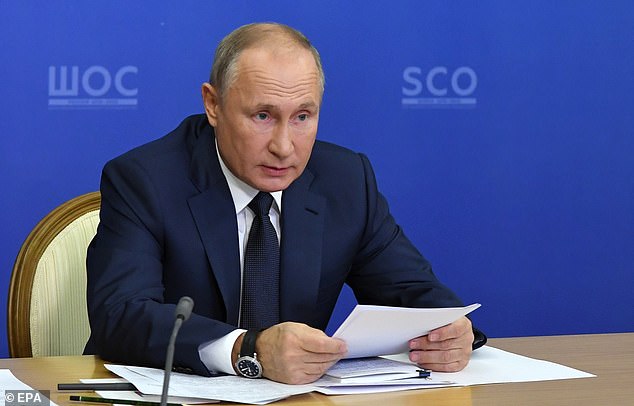 Vladimir Putin, pictured, says Russia is ‘nearing completion’ of a new nuclear command post which could control the country’s doomsday weapons ‘even in the event of a nuclear strike’

The triad is made up of land-based launch systems, nuclear-powered ballistic missile submarines, as well as older nuclear bomber aircraft.

With relations strained between Russia and the West, one report earlier this year by the International Institute for Strategic Studies warned that Russia’s overhauled military was at its strongest since the fall of the Soviet Union.

The USSR had around 40,000 warheads at its peak but fears of a new arms race have grown after the US backed out of a Cold War-era treaty last year.

The Trump administration quit the pact after accusing Russia of violating the agreement signed by Ronald Reagan and Mikhail Gorbachev in 1987.

The Soviet Union had around 40,000 warheads at its peak but fears of a new arms race have grown after the US backed out of a Cold War-era treaty last year.

Russia responded by ordering a ground-launched version of the Kalibr cruise missile to be built, adapting a weapon previously launched from warships and submarines.

Such weapons had previously been banned by the so-called INF treaty which prohibited short-and intermediate-range missiles launched from the ground.

Putin also wants to give the Russian navy an underwater drone or ‘torpedo’ armed with nuclear strike weapons and carried by submarines. 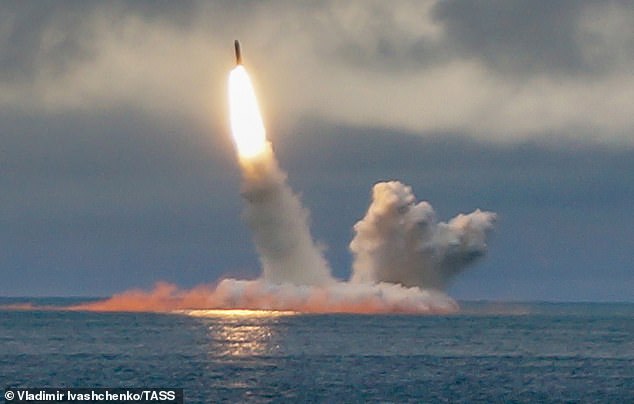 He claimed that the US saw Russia as a ‘main military adversary’ and had plans for using nuclear weapons in response to conventional attacks.

‘We also see that the arms control system is faltering and deteriorating,’ Putin said. ‘We have forwarded our proposals on devising a new security equation to our US partners.

‘These proposals take into consideration all factors affecting strategic stability with a special emphasis on first-strike capability. We believe a first-strike attack to be unacceptable.

‘Russia’s proposals could lay the groundwork for further comprehensive dialogue with the United States about the future framework to control nuclear-missile weapons.

‘This is critical for our two countries and for the whole world, considering that we are the two biggest nuclear powers.’

US president-elect Joe Biden has promised to ‘pursue an extension of the New START treaty’, which expires in February 2021.

Biden called the treaty ‘an anchor of strategic stability between the United States and Russia’, while also vowing to ‘fight back against Russia’s attacks on Western democracies’ following alleged state-sponsored meddling.

Putin is one of the few major world leaders who has yet to acknowledge Biden’s election victory, which Trump is refusing to accept.

Trump caused outrage at home by accepting Putin’s denials of Russian meddling at a Helsinki summit in 2018, and later backtracked after severe criticism.