Who’s been unframed? Queen’s photo of Prince Harry and Meghan Markle that had pride of place at Buckingham Palace… is mysteriously GONE amid turmoil over Royal couple

A framed portrait of Meghan Markle and Prince Harry that had pride of place on a table in Buckingham Palace has mysteriously been removed, photographs reveal.

The picture of the Duke and Duchess of Sussex was last spotted in July the Queen’s audience room in her London residence, but yesterday it had disappeared.

The absence of the portrait was revealed in a snap taken during a private meeting between Her Majesty and the High Commissioner for Grenada, Kisha Alexander-Grant.

It comes as  a source close to Harry and Meghan publicly hit out at other members of the royal family amid the fallout from the ITV documentary, in which they launched an attack on the media and their struggles with living in the public eye. 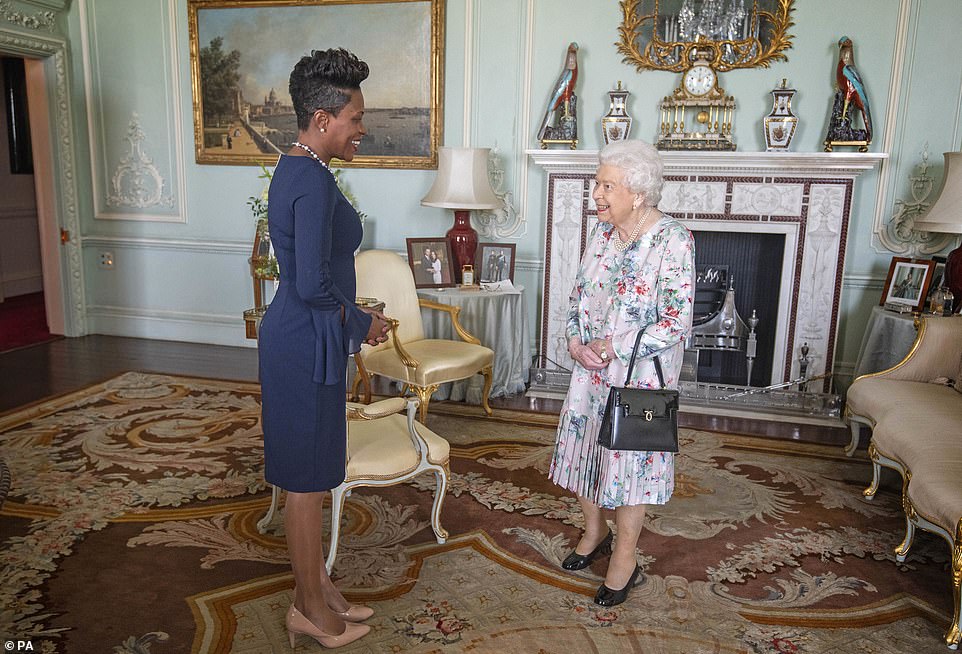 The absence of the portrait was revealed in a snap taken during a private meeting between Her Majesty and the High Commissioner for Grenada, Kisha Alexander-Grant (pictured) 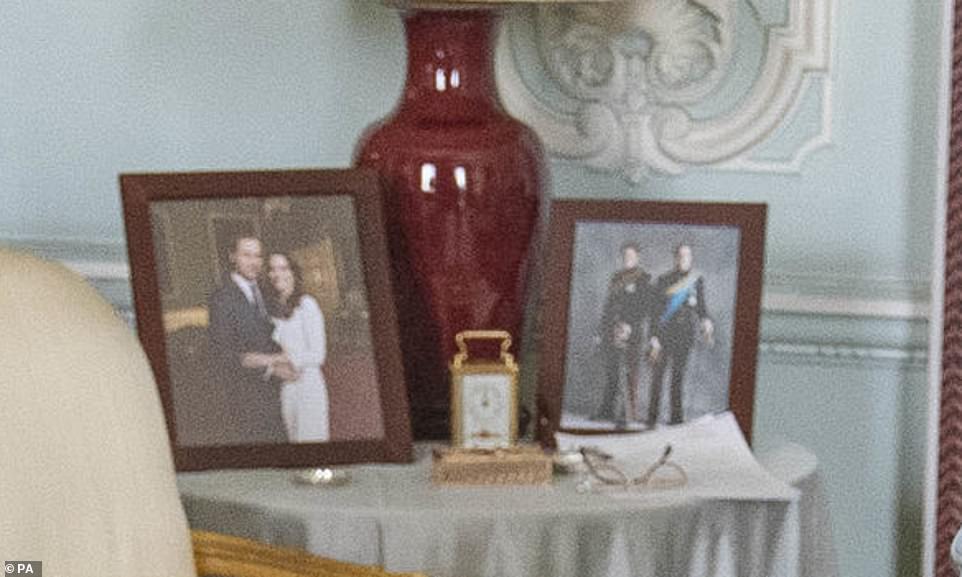 Zooming in on the image shows the photo has been removed. The two pictures now show Kate and William, left, and Prince William and Harry in their military uniforms, right

The source yesterday suggested the House of Windsor was not able to harness the power of the couple, who they said, had single-handedly modernised the monarchy.

Photographs show a small table with a red and white lamp and a small clock with two framed pictures, one showing Kate, the Duchess of Cambridge, the other showing Prince William together with Prince Harry in their military uniforms.

The picture of Meghan and Harry went on display days after their May 2018 nuptials, showing Harry wearing a blue suit facing Meghan wearing in a figure-hugging dress.

It was there on July 24, when the Queen met Boris Johnson to appoint him Prime Minister. It was seen positioned right in front of the Cambridges’ picture.

It isn’t the first time a picture is removed from a prominent place in the Audience Room. 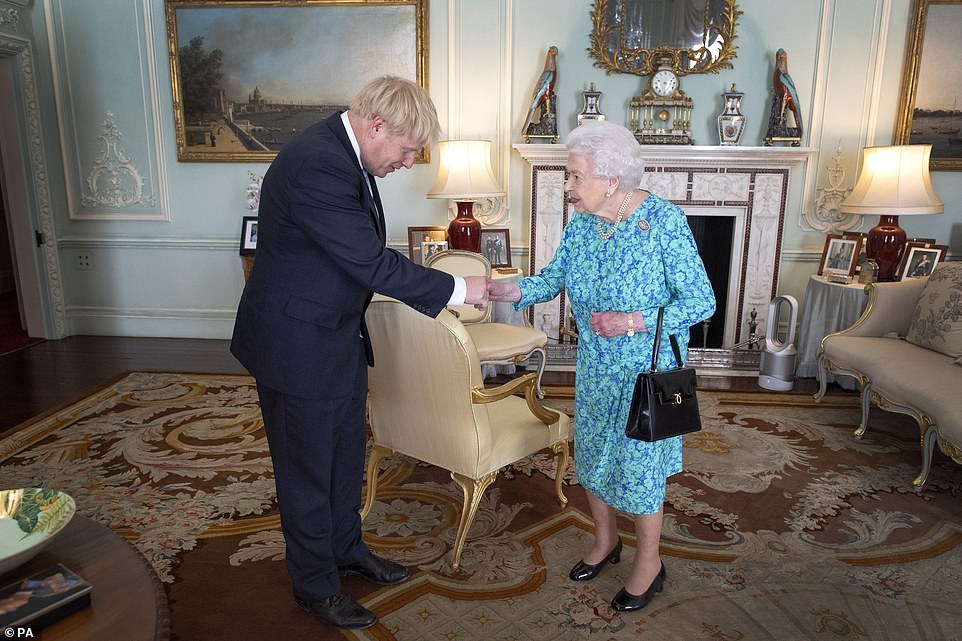 The picture was there on July 24, when the Queen met Boris Johnson to appoint him Prime Minister. It was seen positioned right in front of the Cambridges’ picture 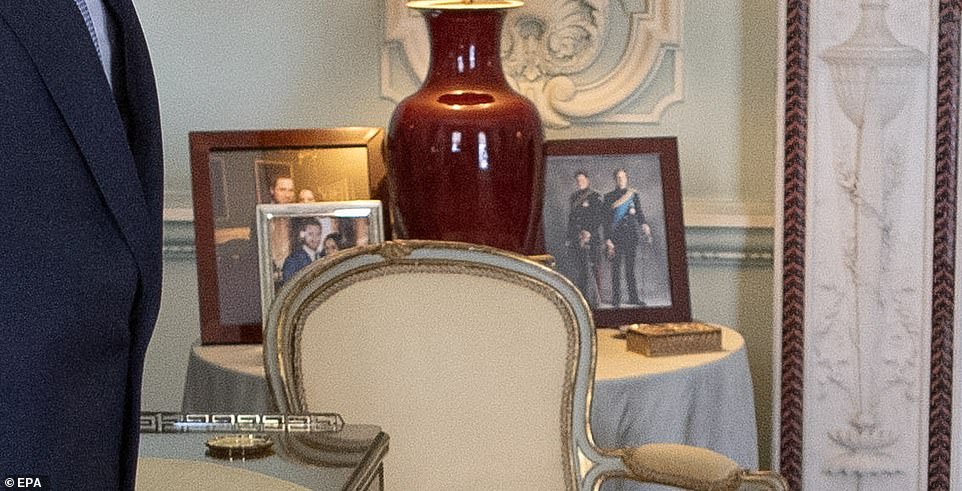 The image of Harry and Meghan can clearly be seen in this image, on the left, taken during the Queen’s meeting with Boris Johnson in July

The photos of Meghan and Harry and the brothers took the place of a portrait of the Queen’s only daughter, Princess Anne, and her husband Timothy Laurence, both in uniform.

Yesterday a source also told CNN’s Max Foster, who has known Prince Harry for six years and interviewed him during his tour of Afghanistan in 2013, that there had been a ‘hysterical’ media reaction to comments Harry made about William in Sunday’s ITV documentary.

In Harry & Meghan: An African Journey, the Sussexes spoke of their struggles, with Meghan revealing she has found it difficult to adapt to her new royal role under relentless media scrutiny.

Asked by ITN News At Ten host Tom Bradby about the ‘impact on your physical and mental health of all the pressure that you clearly feel under’, she said: ‘I would say – look, any woman, especially when they are pregnant, you are really vulnerable and so that was made really challenging. 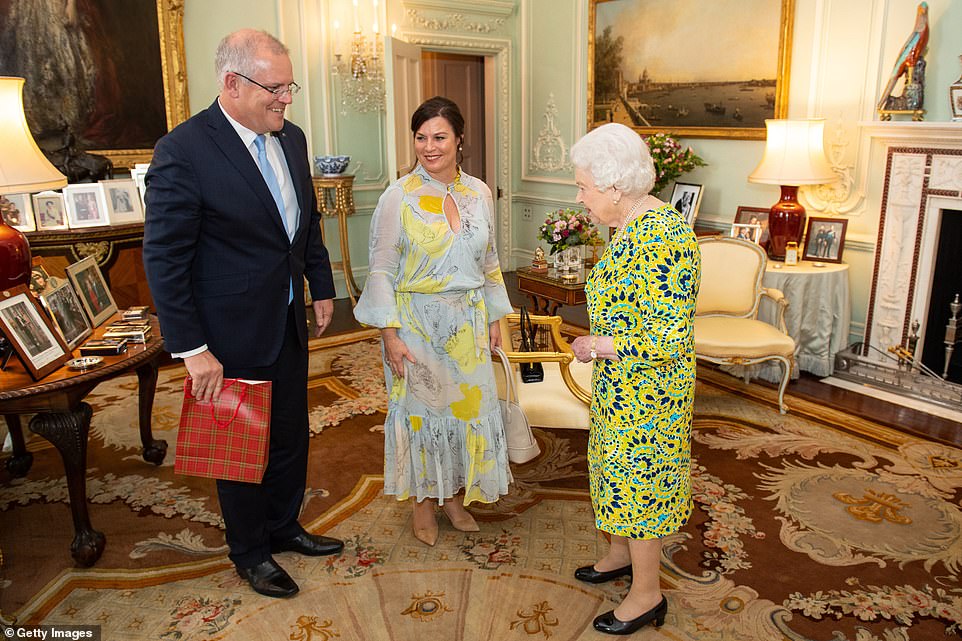 ‘And then when you have a newborn, you know? And especially as a woman it’s really, it’s really a lot.’

Meghan also admitted ‘not many people’ had checked how she was truly coping – a confession some commentators have seen as a swipe at the Royal Family.

She said: ‘Well, I guess, and also thank you for asking, but not many people have asked if I’m okay, but it’s a very real thing to be faint behind the scenes.’

Prince Harry voiced his fears of ‘a repeat of the past’ and protecting his family from the media, and Harry also told the programme about his relationship with his brother, saying they have ‘good days’ and ‘bad days’ and are travelling on ‘different paths’. 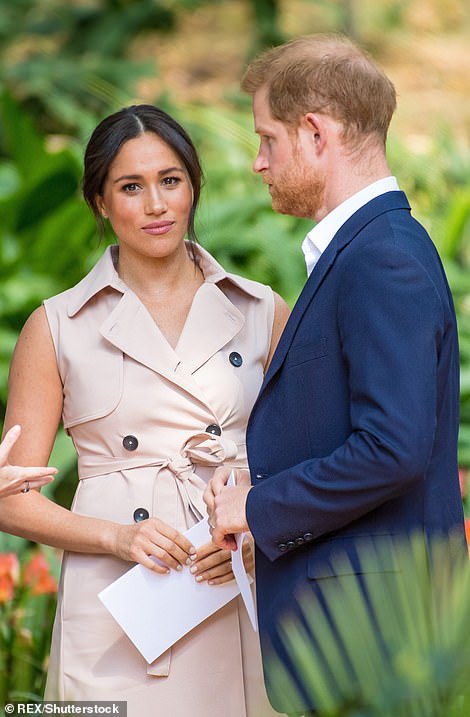 It triggered a response from William as an insider told the BBC that he was worried Harry and Meghan were in a ‘fragile place.’

According to the source who spoke to CNN they said that Harry was just giving an ‘honest answer’ and that any sibling seeing that ‘would of course be concerned.’

Royal commentators also expressed their discontent with the actions of Harry and Meghan, and said the Queen and senior royals are ‘very worried’ about the direction the ‘divisive’ couple are heading.

Jonny Dymond, the BBC’s royal correspondent, said: ‘I think they (the royal family) will be pretty horrified actually.’  And royal commentator Penny Junor described the couple’s actions as a ‘big mistake’. 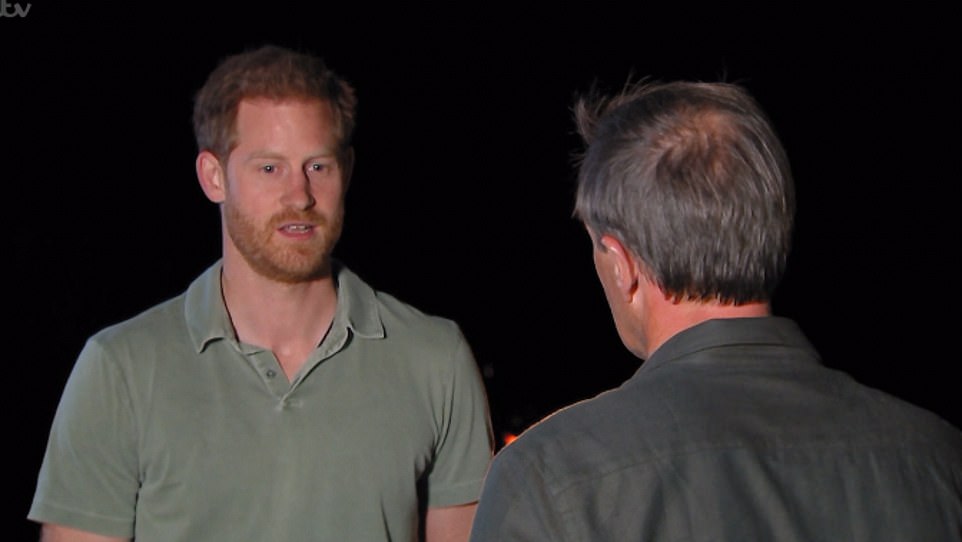 During the documentary aired on ITV on Sunday night, Prince Harry (pictured above) revealed his feelings about his royal duties