Radio station intern tells court R. Kelly locked her in a room at his studio for days without food and water before sexually assaulting her – and one of his staff warned her to keep quiet after saying: ‘You don’t f*** with Mr. Kelly’

An eighth accuser has taken to the stand at R. Kelly’s sex-trafficking trial, claiming that the star locked her in a studio for days without food and water before sexually assaulting her when she was unconscious.

The woman, who identified herself as Sonja, told the court in Brooklyn that she was a 21-year-old intern at a radio station in Salt Lake City in 2003, and traveled to Chicago to interview Kelly.

She said that the radio station would not arrange her travel to Chicago, so she went on her own, with Kelly’s team handling the logistics.

She claims after she arrived she was kept for at least two days in a locked room without food and water at Kelly’s ‘Chocolate Factory’ studio.

Sonia said that after finally being allowed to eat she became ‘extremely full’ after a few bites and ‘felt something coming over’ before falling asleep.

She said Kelly was adjusting his pants when she woke up, and recalled feeling ‘wet stuff’ between her legs and on her thighs.

‘Made me feel like something happened to me,’ Sonia said under questioning by Assistant U.S. Attorney Maria Cruz Melendez. ‘I know my body … I was touched sexually.’

On cross-examination, Kelly’s lawyer Deveraux Cannick questioned why Sonia did not immediately call police or see a doctor, waiting instead until the 2019 Lifetime documentary ‘Surviving R. Kelly’ described Kelly’s other alleged abuses.

Sonia later told Melendez she did not think anyone would believe her, and that she had been scared of Kelly.

Kelly, 54, whose full name is Robert Sylvester Kelly, has pleaded not guilty to nine criminal counts for running an alleged decades-long racketeering scheme targeting women and girls, with help from people he employed. 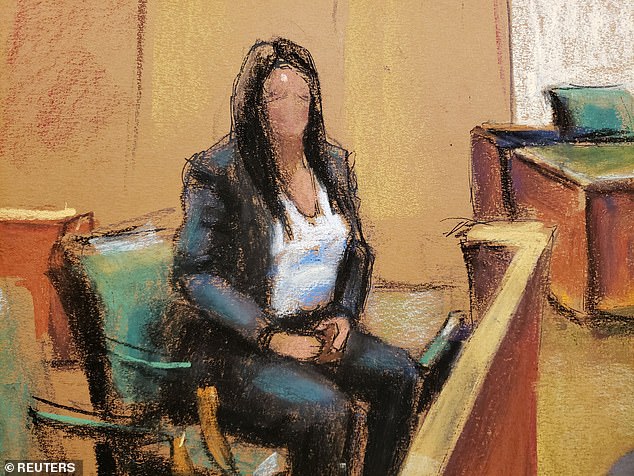 An eighth accuser, who identified herself as Sonja, (pictured in court sketch) took to the stand to testify against the R&B singer at his sex abuse trial in Brooklyn on Thursday 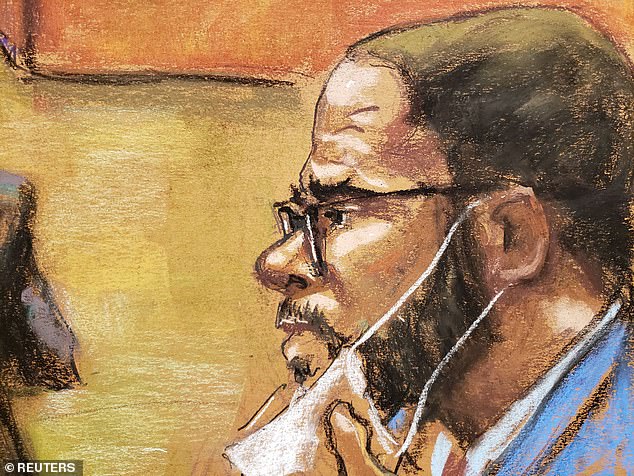 An eighth accuser has taken the stand against R. Kelly, 54, whose full name is Robert Sylvester Kelly (pictured) 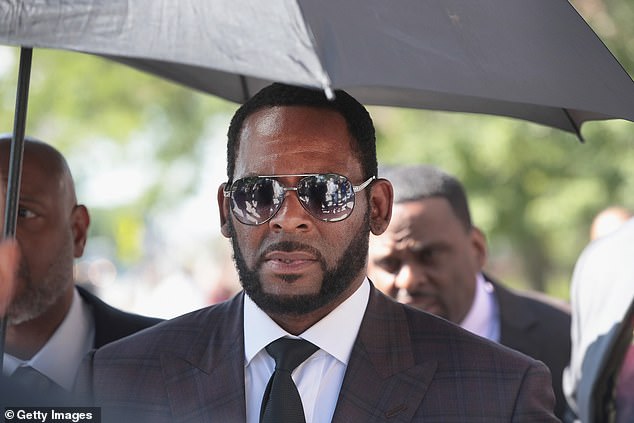 On Thursday, an eighth accuser testified that she woke up after being locked in a studio and saw R. Kelly (pictured) in the corner of the room pulling up his pants

According to Sonja things were off from the start.

After arriving in Chicago, she says an associate of Kelly’s asked her ‘crazy’ questions, including if she needed  ‘protection’ which she took to mean security, but he soon clarified, ‘Do you need a condom?’

To which she responded, ‘No, I’m not here for that.’

She said she was made to sign an NDA by Kelly’s associates who photocopied her IDs and asked for the phone numbers of her closest contacts, including her mother and grandmother, the New York Times reported.

She was told to wait alone for Kelly in a windowless room. When she tried to step out, she discovered that the door was locked from the outside and that, after banging on the door with no response, she needed permission from Kelly to go to the bathroom or anywhere else, she said.

‘I was scared. I was ashamed. I was embarrassed,’ she said.

The witness claimed two days passed before she was finally given something to eat – Chinese takeout and a soda. After only a few bites and sips from her meal, she passed out on a couch, she said.

She awoke to find that someone had taken off all her clothes and felt ‘wet stuff’ between her legs and on her thighs, she said. She also spotted Kelly in the corner pulling up his pants, she said, making clear to her he had assaulted her.

Kelly left the room, saying he would be back soon, she said, the last time she saw him. What felt like another few days had passed before she was given a flight home, she said.

‘I know my body… I was touched sexually,’ she told Assistant U.S. Attorney Maria Cruz Melendez.

When asked if she had ever consented to any sexual acts with the singer she told prosecutors ‘absolutely not.’

‘I was sexually assaulted. There was something in me that wasn’t invited,’ Sonja testified. 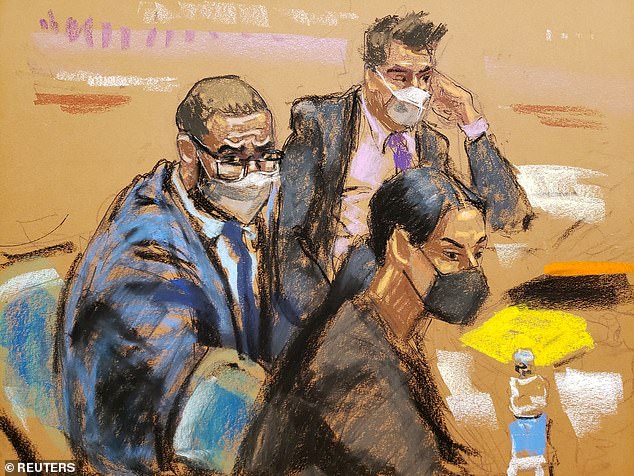 Singer R. Kelly (pictured) in court. He faces between 10 years and life in prison if convicted on all counts 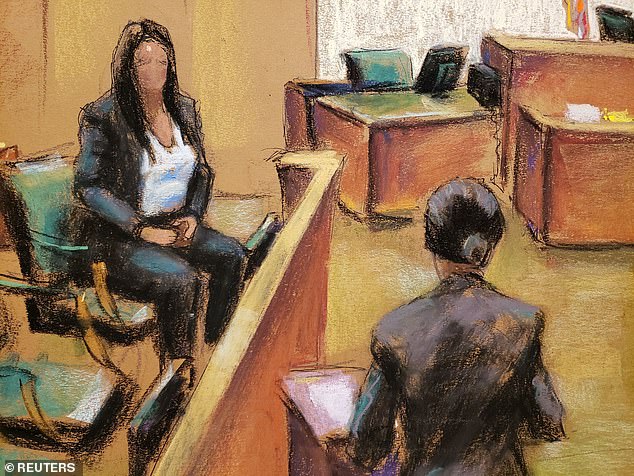 Sonja says after the alleged assault she was made to sign another NDA, which she said she did not read before signing because she just wanted to go home.

Before she left the Chocolate Factory, Sonja claims Kelly’s associates threatened her to stay quiet about what happened in the studio.

Sonja said she took the threat seriously and chose not to speak out because at the time she had a baby daughter, the Times reported.

‘He had my address, the address to where my daughter was at,’ she told prosecutors.

Sonja’s testimony was the first time she publicly spoke out about the alleged assault.

One of Kelly’s lawyers suggested she made up her story after she saw other accuser speak out against Kelly in a Lifetime documentary, the Times reported.

As he has with other accusers, defense attorney Deveraux Cannick pressed the witness on why it took several years for her to come forward with her accusations. He noted too her admission that she had a cell phone when she alleges she was locked in the room.

‘Did you call 911? After you were raped, according to you, you didn´t call 911?’ Deveraux asked on cross-examination.

The singer has been on trial since Aug. 18 for running an alleged decade-long racketeering scheme targeting women and girls for sex, with help from employees and assistants.

Prosecutors have argued that the 54-year-old singer abused at least six women and girls, four of whom were minors when he first had sexual contact with them.

He is charged with racketeering, sexual exploitation of a child, kidnapping, bribery and forced labor between 1994 and 2018.

The trial has so far featured a steady stream of accusers claiming Kelly began sexually degrading them when they were still in their teens. They said he used his stardom to lure them into an insular world where he watched their every move and doled out perverse punishments, spanking them and isolating them in hotel rooms if they broke a vow to never speak about him to anyone else.

He is not being charged with rape or sexual assault, the Times reports, as the accusations against him fall outside the statute of limitation.

The racketeering charge, though, allows prosecutors to present evidence of any related potential crimes.

Kelly, who is best known for his Grammy Award winning song I Believe I Can Fly, denies all charges, claiming the women were groupies who wanted to take advantage of his fame and fortune.

He faces between 10 years and life in prison if convicted on all counts.