A Christmas miracle! First ever baby white rhino is born at UK zoo – after the species was hunted to near extinction

A rare baby white rhino born at a British zoo a week before Christmas has been hailed as a ‘little miracle’.

Keepers do not yet know if the calf is male or female and it has yet to be named.

White rhinos typically weigh between 88lbs to 132lbs at birth. Once fully grown, they can exceed 4,000lbs, or the weight of a large SUV.

They are typically able to stand just an hour after birth, immediately attempting to suckle on their mother.

The species was previously hunted to near extinction but the success of conservation has seen numbers grow to around 18,000. They are classed as near threatened in the wild. 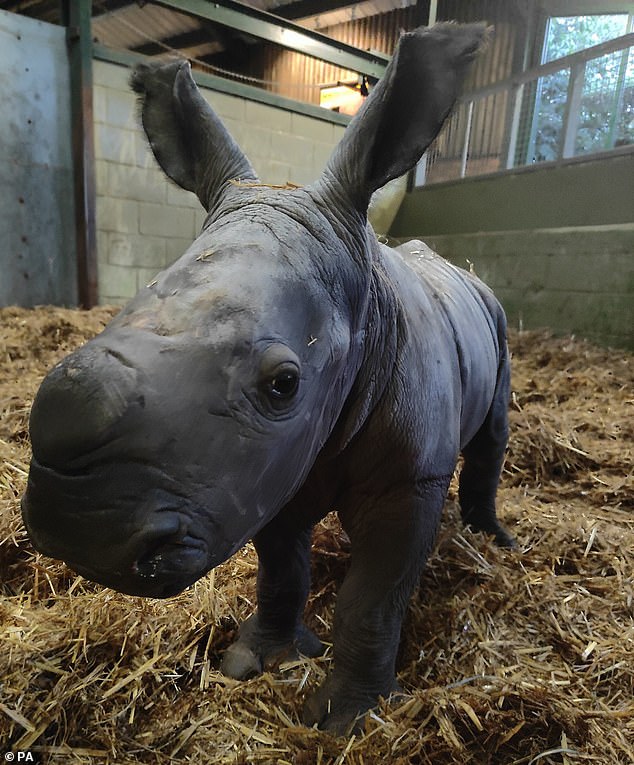 The rare southern white rhino calf (above) was born at Africa Alive near Lowestoft, Suffolk on Saturday. Experts say there are just 18,000 remaining across the world

‘This is the first time white rhinos have ever been bred at Africa Alive, so the birth of this calf truly is a little miracle.

‘Njiri and her baby are doing well but she is a first-time mum and we are monitoring her closely.

‘Pregnant white rhinos will leave their group (or crash) shortly before the birth and will stay apart for a few days afterward.

‘To replicate this natural behaviour, we set up a “birthing suite” for Njiri away from the other rhinos which is monitored closely through CCTV cameras.’

Njiri and Zimba were identified as being genetically compatible mates by The European Association of Zoos and Aquaria (EAZA) breeding programme which aims to conserve the population of threatened animals.

The zoo is home to four southern white rhinos – three females and one male – and this is the first time a calf has been born at the park as part of the European Breeding Programme for this species.

Claudia Roberts, CEO at the Zoological Society of East Anglia, which runs the zoo, said: ‘This is a very exciting step forward in the conservation of this species and we are over the moon to have our first white rhino calf born at Africa Alive.

‘Our commitment to conservation remains at the forefront of everything we do here at ZSEA with many exciting conservation projects happening across both of our zoos, including our most recent partnership with Tusk – a prolific African wildlife conservation charity.’ 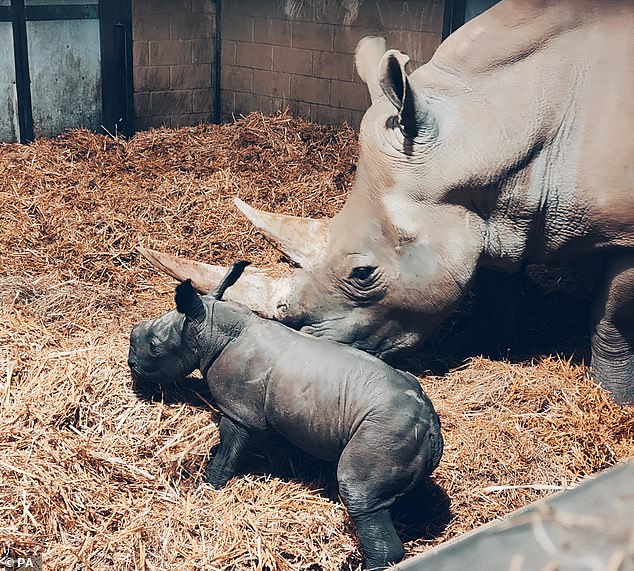 The rhino house is currently closed to allow the rare southern white rhino calf to bond with its mother but will be opened at various intervals over the coming days to allow visitors a first glimpse of the new calf.

Conservation efforts have played a major part in providing a safe space for the species to recover – with around 18,000 individual white rhinos remaining.

WWF explained: ‘Uncontrolled hunting in the colonial era was historically the major factor in the decline of white rhinos. Today, poaching for the illegal trade in their horns is the major threat.

‘Powdered horn is used in traditional Asian medicine as a supposed cure for a range of illnesses – from hangovers to fevers and even cancer.’

Earlier this year, scientists gave fresh hope to conservation efforts after two new white rhino embryos were created in a lab using the eggs of one of these females and the sperm from a deceased male, bringing the total number of viable embryos to five.

The team hopes to implant the embryos into a surrogate mother within the next three years using an IVF technique, and bring white rhinos back from the brink of extinction.