The head of AstraZeneca’s Australian operations said no agreement had been struck with the federal government to supply more than the 50 million doses already on order or on how much additional doses may cost as states and territories wait to learn what share of the vaccines they will receive.

On Wednesday, NSW Premier Gladys Berejiklian confirmed more than 35,000 frontline workers would receive their first doses of the overseas-manufactured Pfizer vaccine within three weeks from Monday. 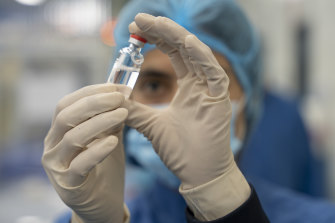 The first vials of locally produced AstraZeneca vaccine at Seqirus/CSL in Parkville.Credit:Seqirus/CSL

But the majority of the population is expected to be offered the AstraZeneca-Oxford University vaccine, of which 50 million will be manufactured in CSL’s Broadmeadows plant in Victoria no earlier than the end of March. An initial 3.8 million doses will be imported.

AstraZeneca Australia and New Zealand country manager Liz Chatwin said the pharmaceutical giant was open to discussing the prospect of enabling manufacturer CSL to produce more of its vaccines in Australia beyond the initial order, which may prove crucial if the vaccine needs to be edited to boost its effectiveness against more contagious variants and supply Pacific Island nations.

“Of course there is scope to have that conversation,” Ms Chatwin said, “but our focus right now is on delivering the commitment we’ve made to the Australian government of 53 million doses.”

Ms Chatwin said AstraZeneca and CSL were on track to deliver the first vials by the end of March and produce one million doses per week.

“Then if we need to we’ll get to a discussion about further supply,” she said.

The issue will be crucial if the AstraZeneca vaccine needs to be altered to boost its efficacy against more infectious virus variants.

But Australia’s Chief Medical Officer Professor Paul Kelly on Wednesday said the vaccine had shown no signs of being less effective at preventing severe illness.

“What we need to do is to get those vaccines out as soon as possible, either the AstraZeneca or the Pfizer vaccine, because they are both very strongly effective at saving lives, and that is the number-one perspective at the moment,” Professor Kelly said.

The federal government is expected to release further information about the AstraZeneca vaccine rollout after it was approved by the Therapeutic Goods Administration on Tuesday.

The states and territories have not yet been informed how many of the 53 million AstraZeneca doses they will receive, but the federal government has indicated their share will be proportionate to population size.

Ms Berejiklian said the government would have more to say about how the vaccine will be rolled out in the next week and everyone who wanted a vaccine will get one in due course.

The Premier said she would not be getting the vaccine early, despite her confidence in its efficacy.

“I would love to get mine early but I don’t think it’s fair. I think the people of the state would be upset if I jumped the queue, so I’ll wait my turn,” Ms Berejiklian said.

AstraZeneca has promised not to profit from its COVID-19 vaccine during the pandemic.

Asked what would trigger a decision to start charging countries more for the vaccine to turn a profit, Ms Chatwin said its future pricing structure was not a current consideration.

“There are still lots of countries reporting new cases – our primary focus right now is on delivering a safe and effective vaccine broadly and equitably throughout the pandemic and that is our primary focus at this time,” she said.

“We’re on the cusp of a rollout, we’re trying to do what we can as a company to make an impact on this huge global health crisis and that’s what we’re focused on right now.”

“We’ve been in a good position that we’ve been able to wait [for] the international experience with the vaccine and learn from that,” Dr Chant said.

NSW’s quarantine workers – including nurses, doctors, police officers, security guards and cleaners – will be the first to roll up their sleeves for the Pfizer vaccine from Monday. They will be followed by frontline healthcare workers at testing clinics, emergency departments, COVID-19 wards, intensive care units and ambulance services.