This place should be a riot of honking, quacking and clucking at this time of year. Instead, there is a deathly silence hanging over Fen Farm, deathly being the operative word.

Alan Wharton’s entire flock of geese, ducks and chickens has gone — and not one of them has ended up on a plate. They were all casualties of the worst outbreak of avian flu in British history, carted off to an incinerator by government officials.

Not that Alan was there to see it. He was too upset to leave the house that day (or the day after that). His wife, Tonya, dealt with the circus which turned up in white hazmat suits.

‘You wouldn’t believe the number of people down here. They even brought their own loos and a mobile office,’ says Tonya.

‘It looked like a crime scene. The neighbours probably thought I’d killed Alan and buried him under the patio.’ 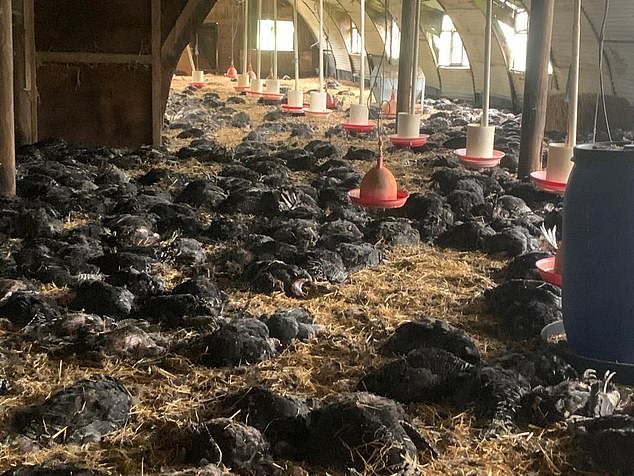 ROBERT HARDMAN: Make no mistake, the avian flu epidemic is worse than anything anyone can recall

The hit squad even dispatched Winnie, Rosie and Ruby, the three pet hens belonging to the Whartons’ nine-year-old son, Charlie.

‘If it wasn’t for my wife, I wouldn’t have got through it,’ explains Alan, as we meet at the gate to the immaculate but empty Fen Farm, near Thelnetham on the Suffolk/Norfolk border.

It’s locked, of course, as it has been since the day the birds were taken. No one is allowed on site except the family.

This is a heartrending saga unfolding on poultry farms all over the country — right now. Not that you are probably aware of it. Our political and media classes have been so preoccupied with the recent Westminster psychodramas and financial turbulence that virtually no attention has been paid to what is an equally historic crisis taking place in the countryside.

Make no mistake, the avian flu epidemic is worse than anything anyone can recall. Whitehall officials, never ones for hyperbole, say it exceeds last winter’s outbreak — and that was called ‘the largest ever’.

Yet, since then, that number has rocketed by another 87, the latest being a farm in Lancashire which was wiped out last night.

It means that more than 5.5 million farmed turkeys, geese and ducks have died or been culled in the past year —2.3 million of them in the past month alone.

Yesterday, the Government announced a Covid-style lockdown on all kept birds across England. Under a new ‘national housing order’, all must remain indoors while new biosecurity measures must be in place for visitors.

The measures have come too late for an estimated 35 per cent of Britain’s free-range poultry market which has already been culled.

This is on a par with the ghastly foot-and-mouth plague of 2001 in terms of the impact on a particular section of Britain’s farming economy.

However, the whole nation knew all about foot-and-mouth because it hit cattle and sheep, which are a much more visible part of our public landscape. 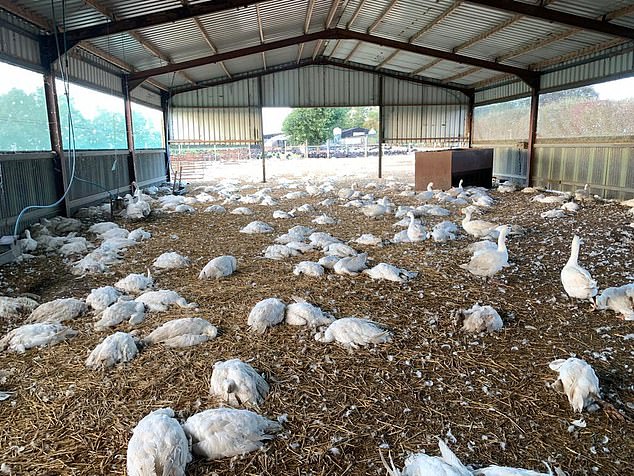 This is a heartrending saga unfolding on poultry farms all over the country — right now. Pictured: Dead geese at Steve Childerhouse’s Norfolk farm

Poultry farming is a more sheltered business, with hundreds of millions of animals occupying a fraction of that space, often under cover and out of public view.

Yet all this contributes £6 billion to the national economy in terms of meat and eggs. One part of it is also almost entirely seasonal.

And this crisis raises the very real prospect of a dire shortage of both turkey and geese this Christmas. Only then, perhaps, will the rest of us actually wake up to the severity of what is going on.

A few weeks ago, Britain’s biggest producer of Christmas geese, Suffolk’s Gressingham Foods, lost its entire flock to avian flu. ‘It’s a race against time. Nearly all the geese are gone and a lot of the country’s fresh turkey flock has already been lost,’ says Paul Kelly.

Famous for his Kelly Bronze premium turkeys, Paul is chairman of the British Turkey Federation and is also on the Poultry Board of the National Farmers Union.

His own birds are safe and sound — for now — but he is warning that unless the Government changes its current rules, then many farmers will simply give up, whether they get infected or not.

‘The risks are just too high for many farmers to keep going. This really is like Covid for the poultry world — except we are not allowed to vaccinate.’

The Government says a vaccine would be ineffective and merely lead to further mutations of the virus.

This is, by no means, a British crisis. It’s the same story across Europe. In the U.S., they have lost more than six million turkeys just weeks before Thanksgiving, forcing prices up by 20 per cent.

So what is going on? The problem is that an especially virulent strain of the S5N1 flu virus has taken root in populations of wild birds and, thus, travelled all over the world.

The good news is that it poses virtually no risk to humans. The bad news is that it races through bird populations in a matter of hours and, worst of all, it is now a year-round phenomenon.

In the past, this sort of virus would be an occasional winter hazard. This year, cases have been popping up round the clock. Entire populations of Scottish seabirds, including the great skua and the guillemot, have been decimated over the summer.

Seasonal migrations have exacerbated the problem, especially in East Anglia, but there have been reports of dead birds falling out of the sky as far afield as Cornwall and Wales. Left to rot, they infect all around them.

Alan Wharton, for example, did not lose all his birds the other day. His farm was wiped out back in March. Yet his friend, Steve Childerhouse, up the road in Attleborough, Norfolk, lost his birds only in recent weeks.

‘I started this business as a boy with four geese,’ says Steve, 51. His problems began at the end of September when a fox got in and took a few of his 2,500 geese. 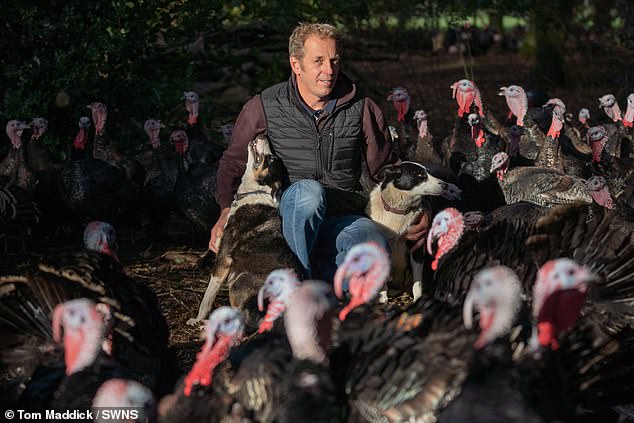 Counting the cost: Steve Childerhouse on his turkey farm before the outbreak

Several days later, he saw that one or two had died of something else. He feared the worst and called the vet.

By the time, the government culling team arrived a few days later, only 26 geese were left alive, staggering among a field of corpses. By then, the virus had taken root among his 11,000 turkeys, too.

‘You get very upset — because we are all very passionate about what we do,’ he says, showing me horrific pictures of what this virus does in a day.

The Christmas round-up had always involved a 40-strong part-time team made up both of locals and Polish workers who would congregate at his farm every November to despatch, pluck and prepare his free-range birds. That team will get no work this year.

Steve is wondering how he will find employment himself for at least another year — he has lost all his birds not just for this Christmas, but for the next one, too.

Defra rules, based on an arbitrary bureaucratic rule of thumb, effectively give farmers two options. They can either opt for a hugely expensive military-style industrial decontamination process or undertake an intensive deep-clean and then wait 12 months before restocking, even though the science is unclear on the survival time of this strain of virus.

This rule, obviously, rules out getting any birds in time for next Christmas. And it makes no provision for the fact you could douse your entire farm in disinfectant, only for a dead swan from Iceland simply to drop into your pond from a clear blue sky.

As things stand, Steve reckons he has lost £200,000 this year alone. And compensation is another key issue. There is no remotely affordable insurance against bird flu.

Farmers can claim for healthy birds lost to a notifiable disease such as this. However, this virus moves so fast that by the time a government vet has answered the phone, done the paperwork, got in the car and turned up to evaluate a cull, there are often no healthy birds left. Hence it really is a race against time to get the officials round as soon as possible, however distressing the outcome.

Last week, the farming minister, Mark Spencer, announced a new package of measures, including dating compensation from the ‘outset’ of a cull. However, the National Farmers’ Union is calling for this to apply from the moment the disease is confirmed.

Howard Blackwell’s nightmare began on October 3 at the farm near Kelvedon, Essex, which his grandfather started in 1930.

The backbone of the farm is turkeys, but Howard had expanded the family business to include geese, chickens and ducks, plus an award-winning farm shop and a butchery serving farmers across the area and employing 40 people. 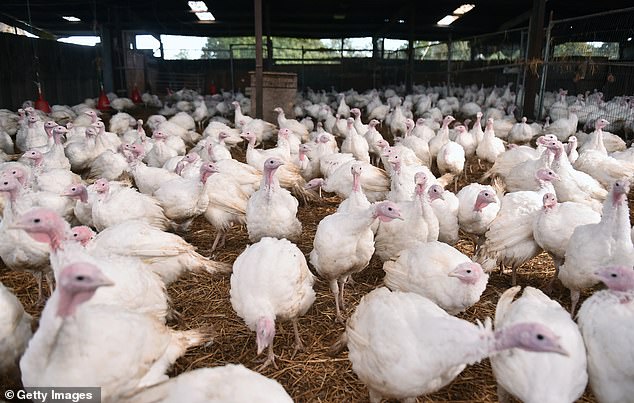 There followed days of mind-numbing calls to and from government agencies before any officials turned up the following weekend. By then, Howard had already opened a turkey shed one morning to find the most appalling sight. ‘It was like Armageddon. It took three of us two hours to carry out more than 1,000 dead birds.’

When the government vets arrived with their gas chambers, mobile office and even a team of security guards, there were only a few hundred turkeys left to euthanise.

To make matters worse, a Defra official called and told Howard to close the farm shop and butchery business. ‘I said to her: “You can’t just bankrupt me and all my staff like that. Who is going to pay all their mortgages? Are you?”

The Tenant Farmers Association came to the rescue. ‘They found out the official paperwork had not been served properly, so the shop and butchery can stay open,’ says Howard, in between calls to cancel the accommodation he had booked for his Polish plucking team.’

You need talk to any of these farmers for only a few minutes to appreciate the other side of this crisis — the strain on families.

These are often tiny businesses, built up over generations only for the whole lot to be destroyed overnight by something entirely beyond their control.

During the foot-and-mouth crisis, there were spikes in rates of suicide and depression among farmers. Don’t be surprised if history repeats itself this Christmas.

And unless there is a change in the rules to allow farmers to restock within six months, rather than 12, a lot of poultry farmers — such as those I have talked to — will be giving up altogether.

In which case, next Christmas, Britain will face a pretty clear choice: factory-farmed turkey ‘parts’ from the other side of the world — or a nice vegan roast with all the trimmings.