Victory for The Croc over Gucci Grace: Robert Mugabe WILL be buried at Zimbabwe heroes’ memorial after row over final resting place as thousands queue to see his body at the stadium where he became leader

Robert Mugabe will be buried at a shrine to Zimbabwe’s liberation heroes in the capital Harare, a family spokesman has said, apparently putting an end to the row between his family and successor over his final resting place.

Leo Mugabe, the ex-President’s nephew, said the burial at the National Heroes Acre monument in Harare will be a private family ceremony which will take place at an unspecified date after the public State Funeral on Sunday.

After the State Funeral Mr Mugabe’s body will be taken to his home village of Zvimba where the family and leaders from his tribe will perform additional rites.

His body is now lying in state at Rufaro Stadium in Harare, from which he proclaimed the renaming of Rhodesia as Zimbabwe 1980 and assumed the role of Prime Minister, which later became President.

The move to have him buried in Harare marks a victory for Emmerson Mnangagwa, Mugabe’s successor who ousted him from power in a coup 2017, who insisted he deserved a place at the shrine. 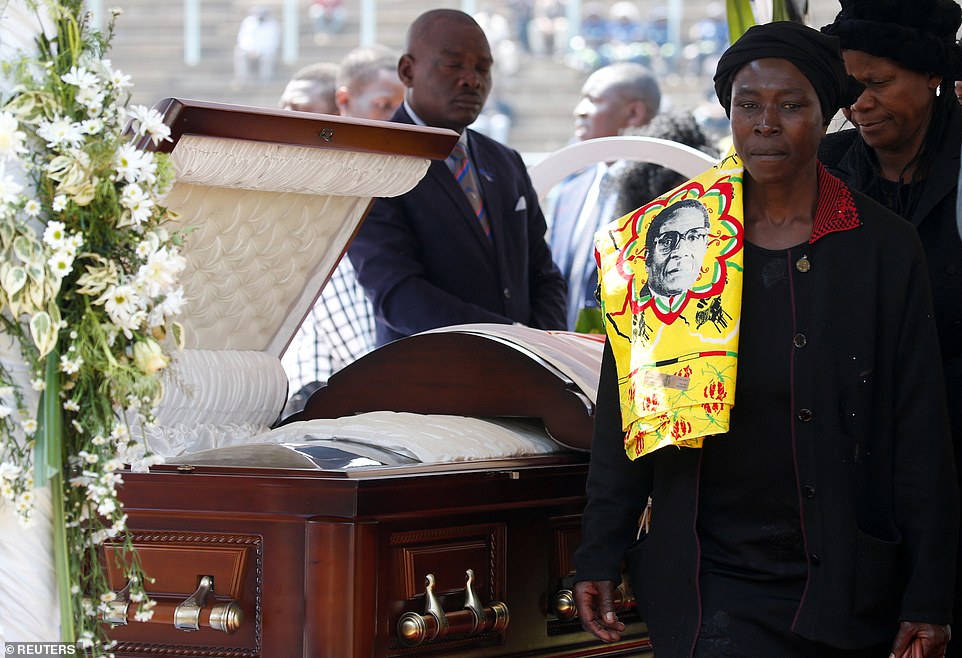 Robert Mugabe’s family said Friday that he will be buried at the National Heroes Acre monument in Harare as they appeared to back down over demands that he be laid to rest in a private ceremony at his homestead in the village of Zvimba (pictured, his body laying in state at Rufaro Stadium in Harare on Friday) 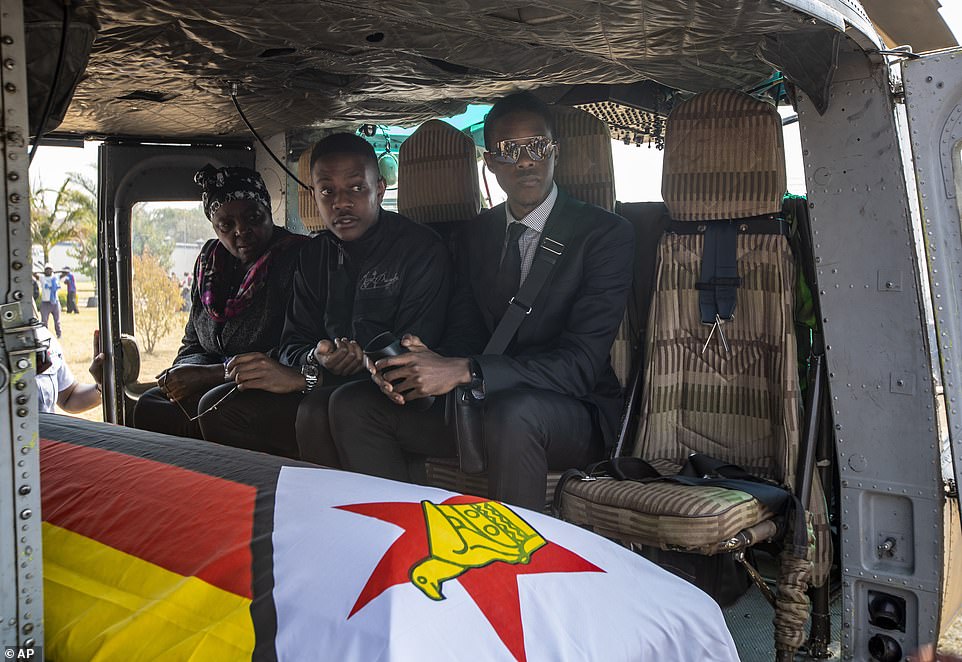 Chatunga Mugabe (centre) and Robert Mugabe Junior (right) the former President’s two sons, were among family members paying tribute to him at the stadium on Friday 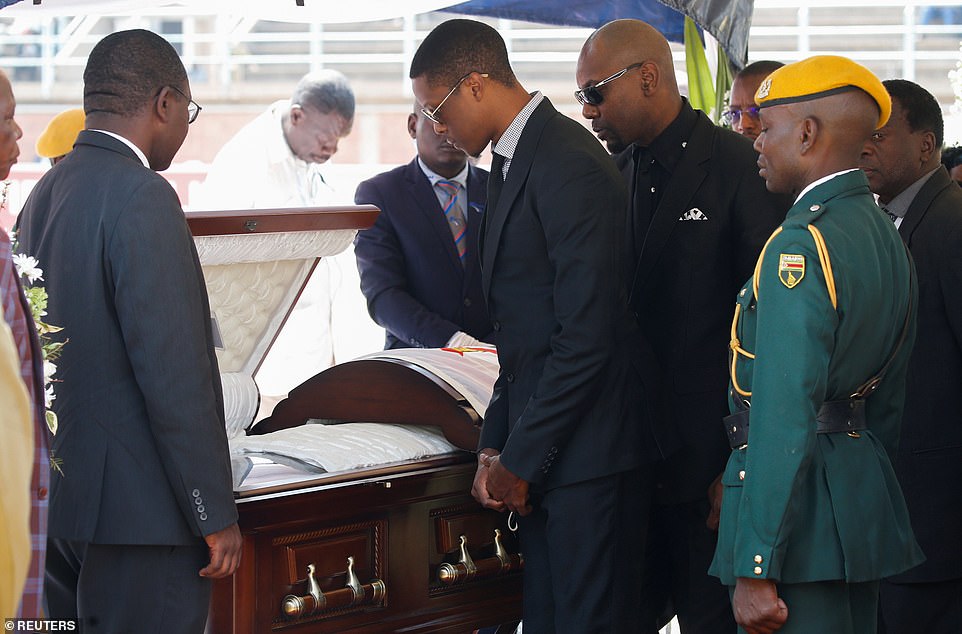 Robert Mugabe Jr, who was at his father’s side in his final days, looks into his coffin at the Rufaro Stadium, where his father first became leader of the newly-renamed Zimbabwe in 1980 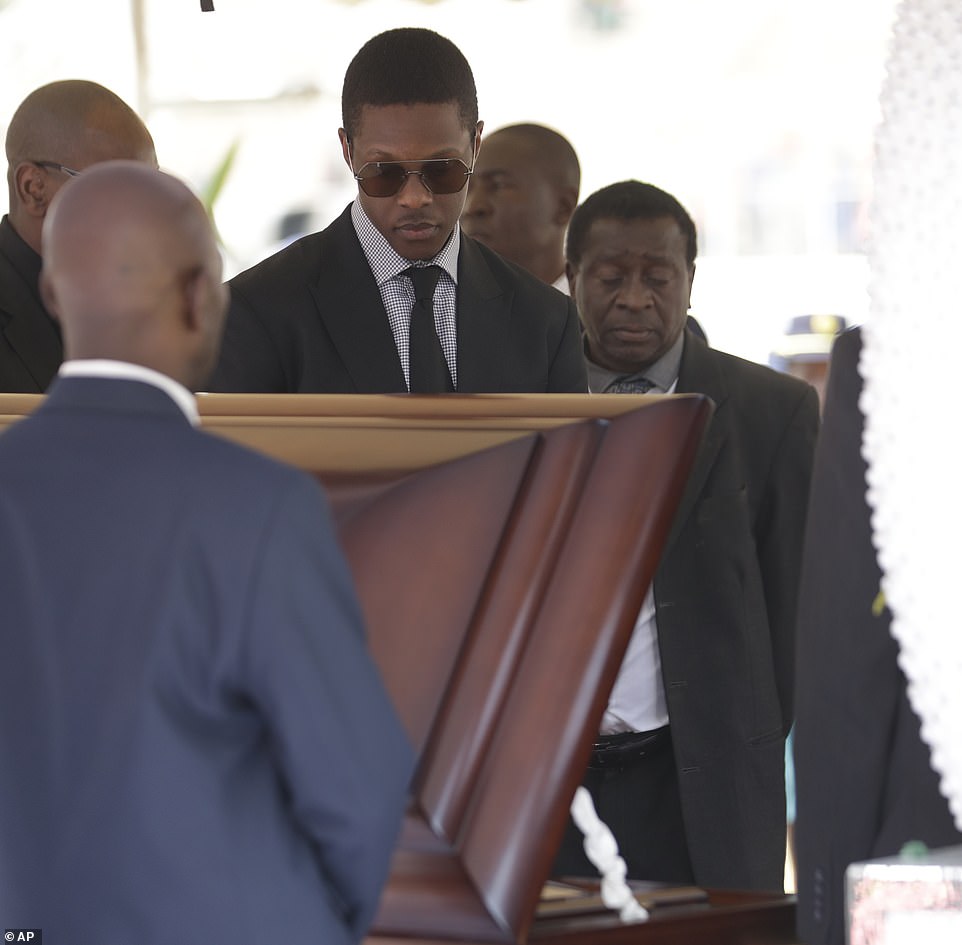 Mugabe Jr pays his respects to his late father early on Friday after riding in a helicopter with the body which was kept overnight at his Harare mansion, known as Blue Roof 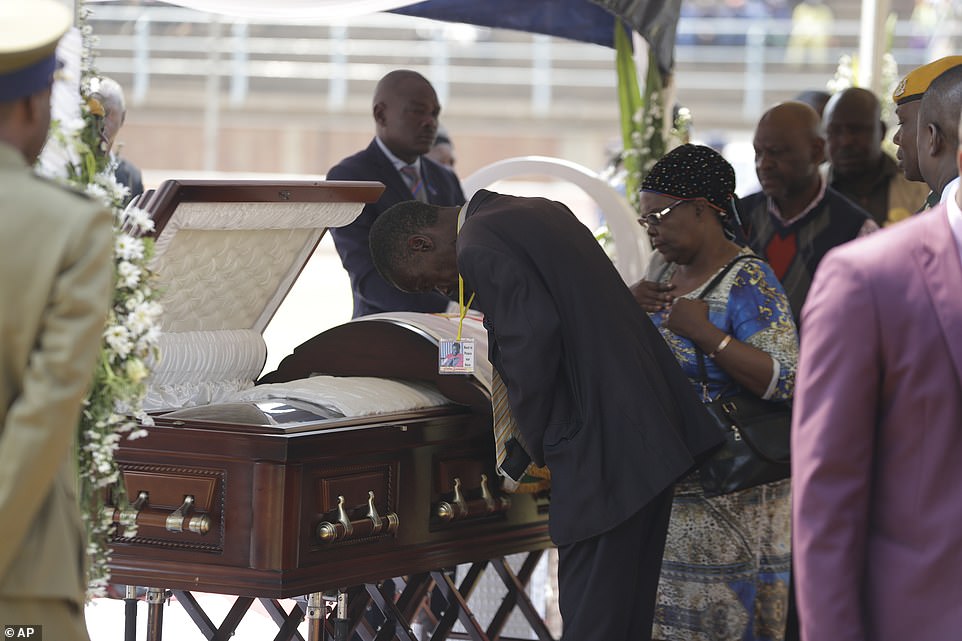 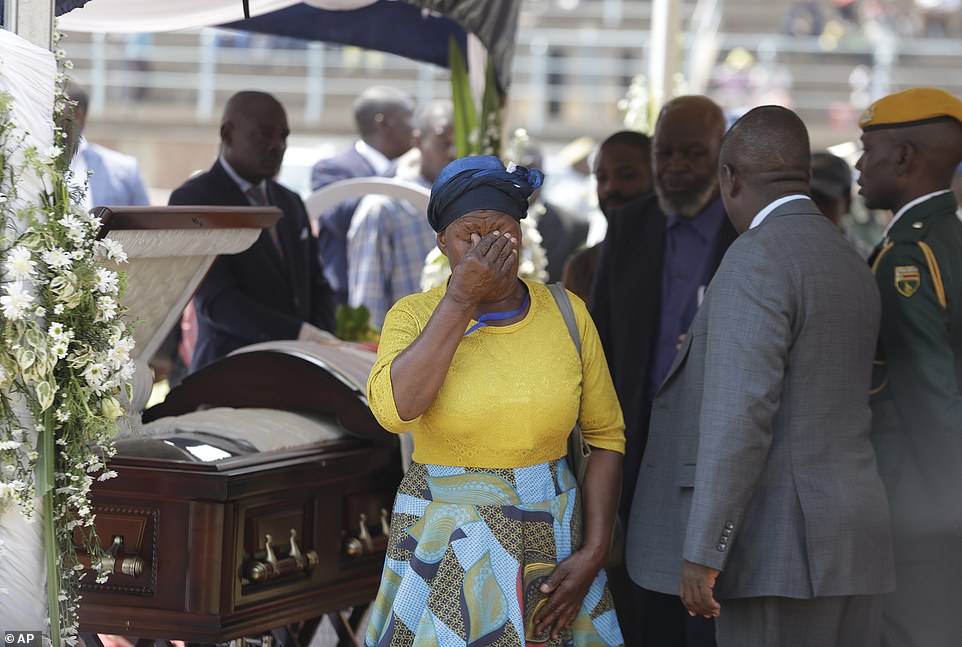 A woman wipes away tears after stopping to see the body of Mugabe, who died last week at a Singapore hospital aged 95 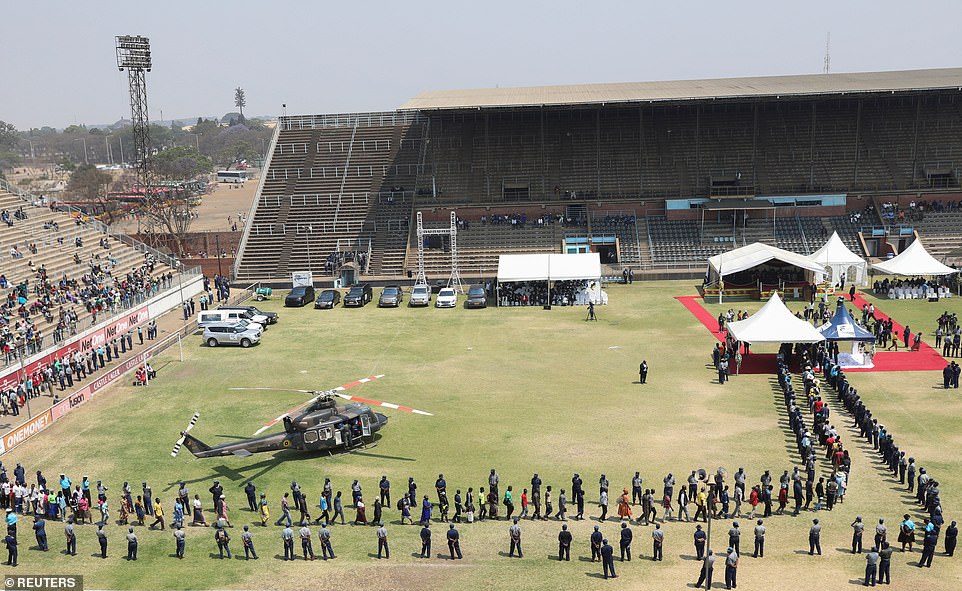 Crowds began to gather early at the stadium in Harare, though formed an orderly line in stark contrast to Thursday when a stampede to get to the coffin left several injured

It was thought that Mugabe was lining her up has his successor when he fired Mnangagwa as his deputy in 2017, leading to the coup.

Grace was forced to flee the country under threat of investigation for corruption, and only agreed to return to Zimbabwe for the funeral after being given assurances she would not be arrested.

Since the coup she had been living with Mugabe in Singapore where he was receiving treatment for cancer, among other ailments.

He passed away at a hospital in the city-state last week at the age of 95.

A queue of people snaked around the stadium in orderly fashion as people waited to pay their final respects on Friday, in stark contrast to Thursday when several people were injured in a stampede to see the body.

Among the crowd were Mugabe’s two sons, Robert Jr and Chatunga, who were seen bowing in front of the coffin.

The news of Mugabe’s burial arrangements marks a stark U-turn from Thursday, when Grace was insisting that he be buried at his homestead on Monday or Tuesday, and that she be front-and-centre at the ceremony. 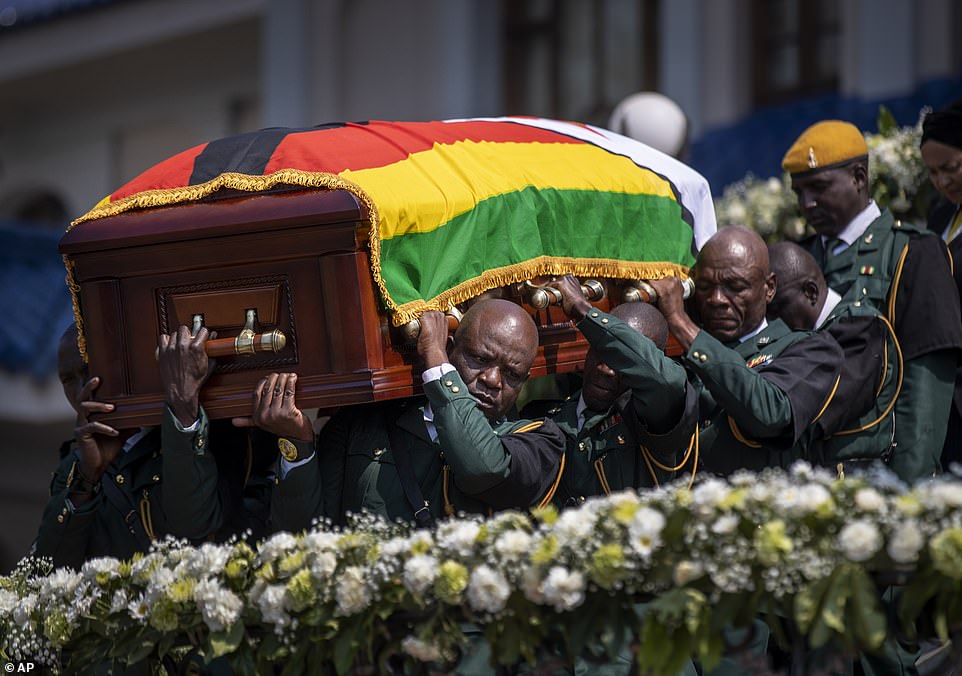 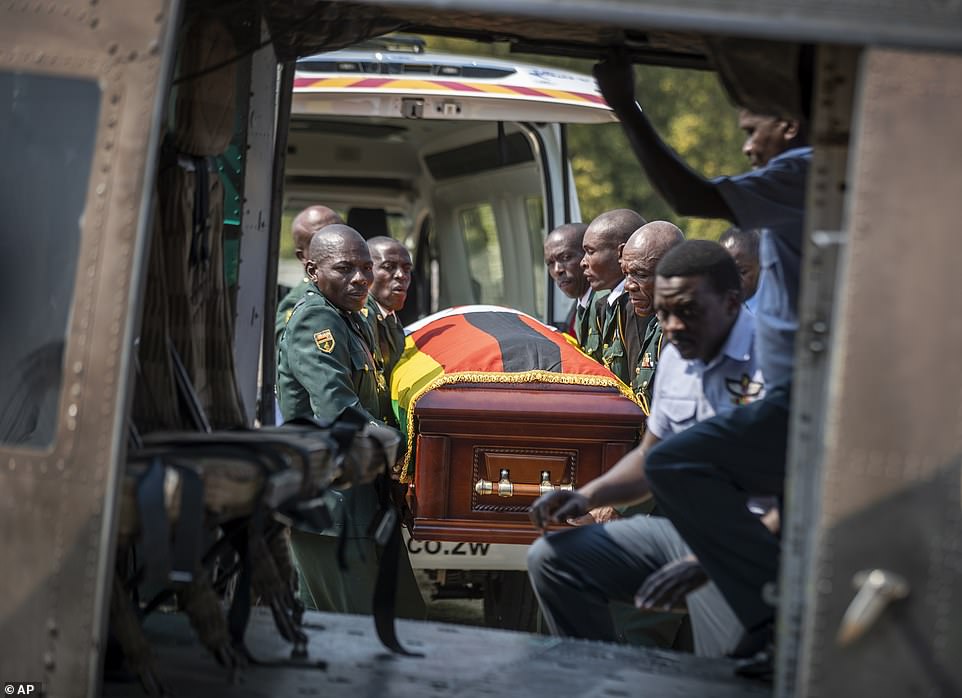 Members of Zimbabwe’s military slide Mugabe’s coffin into a waiting helicopter so it can be taken for its final day on public display in the capital. After this it will be taken to his home town of Zvimba 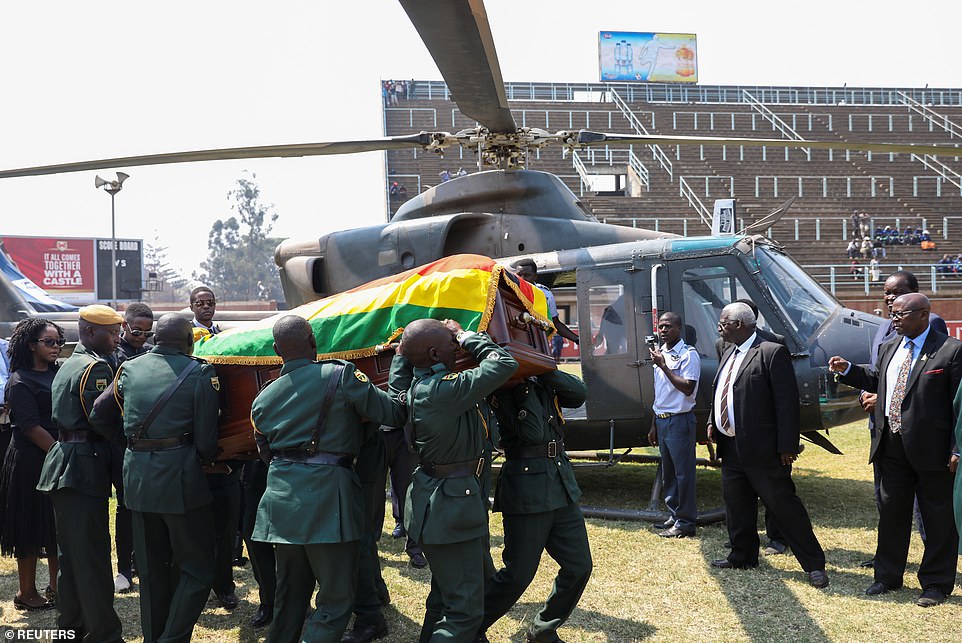 A casket carrying the remains of Robert Mugabe is brought to lie in state at the at Rufaro stadium, in Mbare, Harare 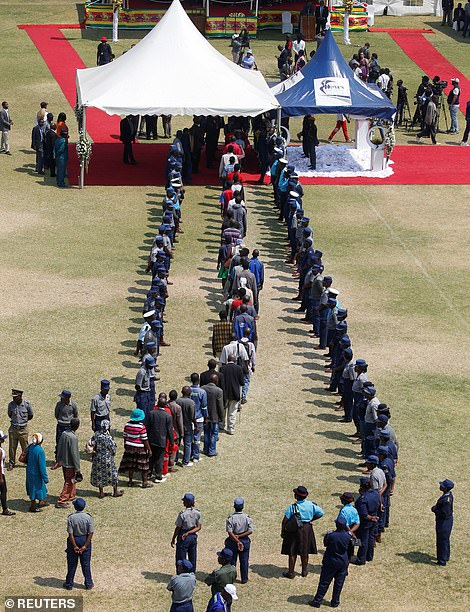 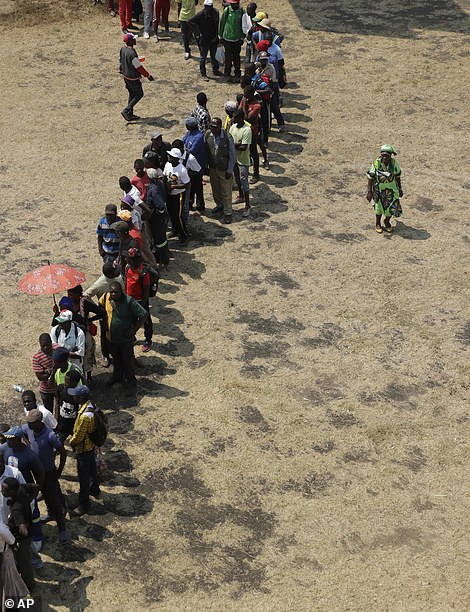 Mugabe’s later life was plagued with allegations of corruption, political scandal, poisoning, and suppression of democracy – but he still remains popular for his role in securing the country’s independence 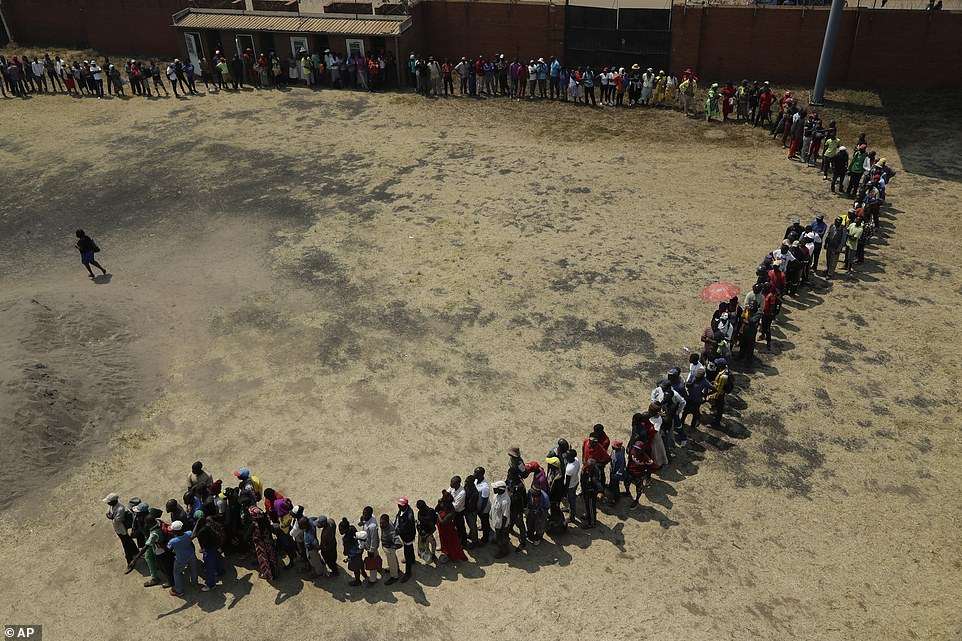 Despite his deeply chequered legacy, thousands of people have turned out to see Mugabe’s body laying in state 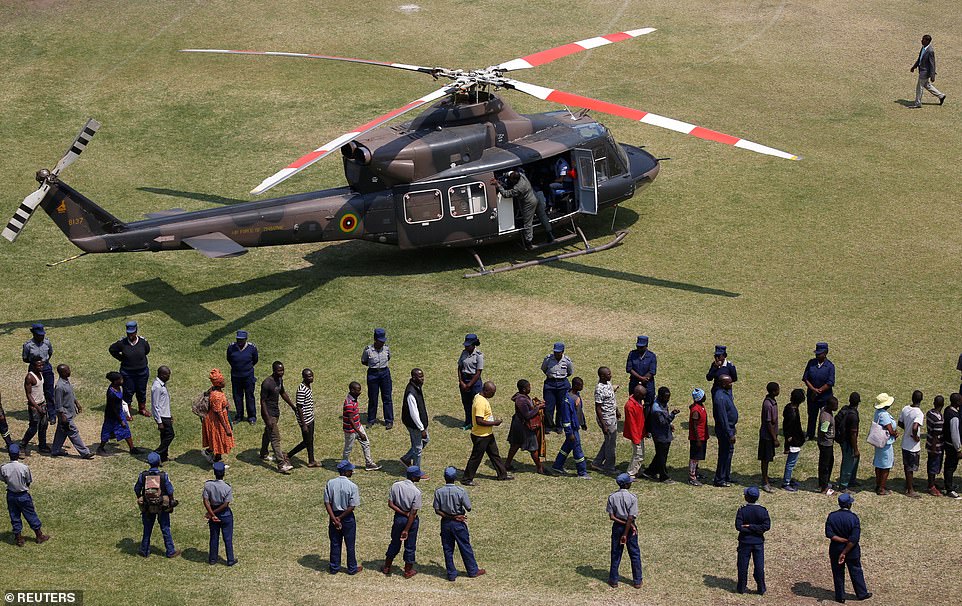 Mourners queue past a military chopper to pay their last respects to Former Zimbabwean president Robert Mugabe as he lies in state at the at Rufaro stadium, in Mbare, Harare

Grace accompanied her husband’s coffin to the public viewing Thursday before a military helicopter later landed on the field and took off after the coffin was placed inside.

Yesterday Mnangagwa and Grace Mugabe stood next to each other as the former President’s body arrived back in the country from Singapore, where he died.

There was no show of antagonism during the short ceremony.

Mnangagwa, who described Mr Mugabe as a ‘a great teacher and mentor’, has declared him a national hero, the highest posthumous award in the country.

A source close to the family said that Mugabe was flown to Singapore five months ago where his health quickly deteriorated.

In what appear to have been the last photos of Mugabe, the former dictator was seen looking frail and weak alongside his favourite son in June.

Robert Jr, who spent much of his time with his father in his final months, shared photos of Mugabe looking slumped and shrivelled in a tracksuit, baseball cap and white beard.

Mugabe’s visible ailments were often shrouded in mystery. Officials often said he was being treated for a cataract, denying frequent private media reports that he had prostate cancer.

Yesterday the body was taken to Mugabe’s palatial home in the capital, known as Blue Roof, after an earlier detour to an army barracks for prayers by the military. 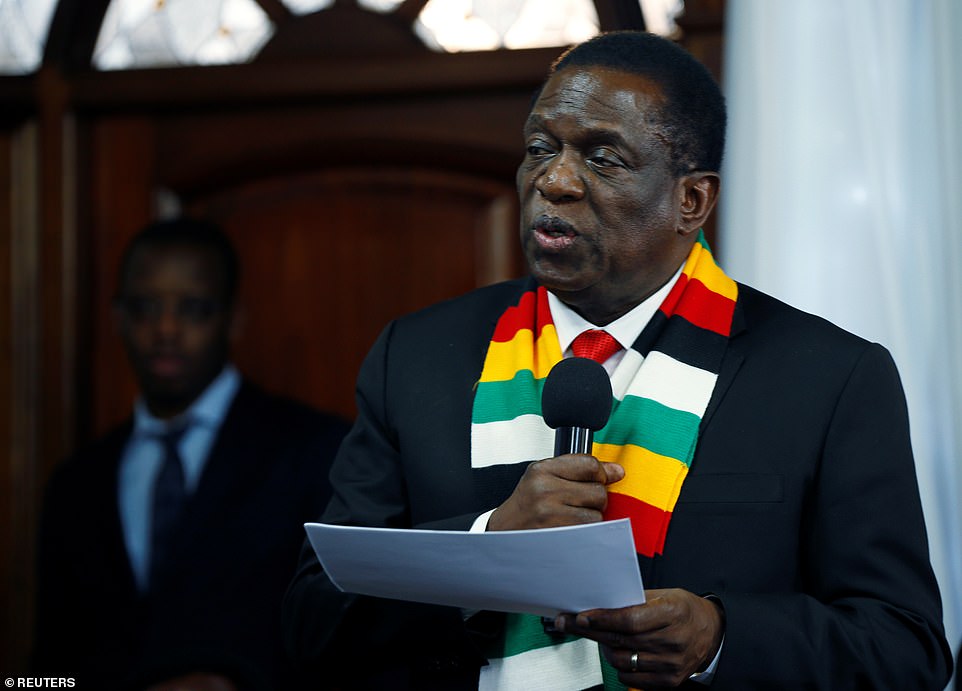 News that Mugabe’s body will be buried in Harare comes as a victory for Emmerson Mnangagwa, his former deputy who ousted him in a coup in 2017, who had insisted he deserved a place among Zimbabwe’s liberation heroes 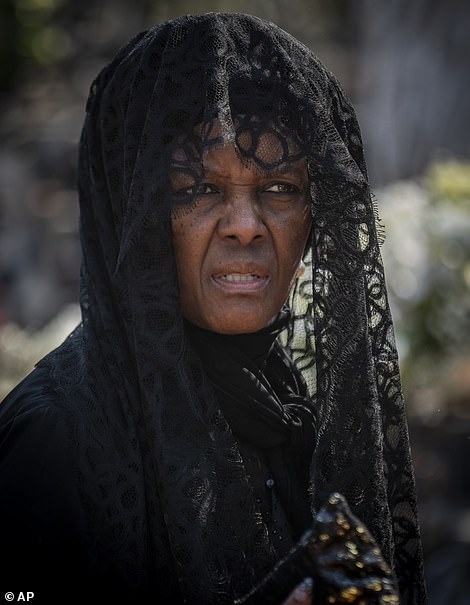 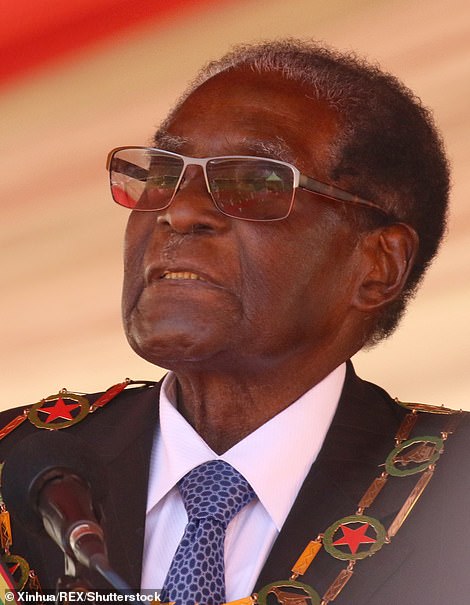 Until Thursday Grace Mugabe had been insisting that her former husband be buried in private in what would have been a snub to the government. It is thought Mugabe was lining her up as successor until the coup 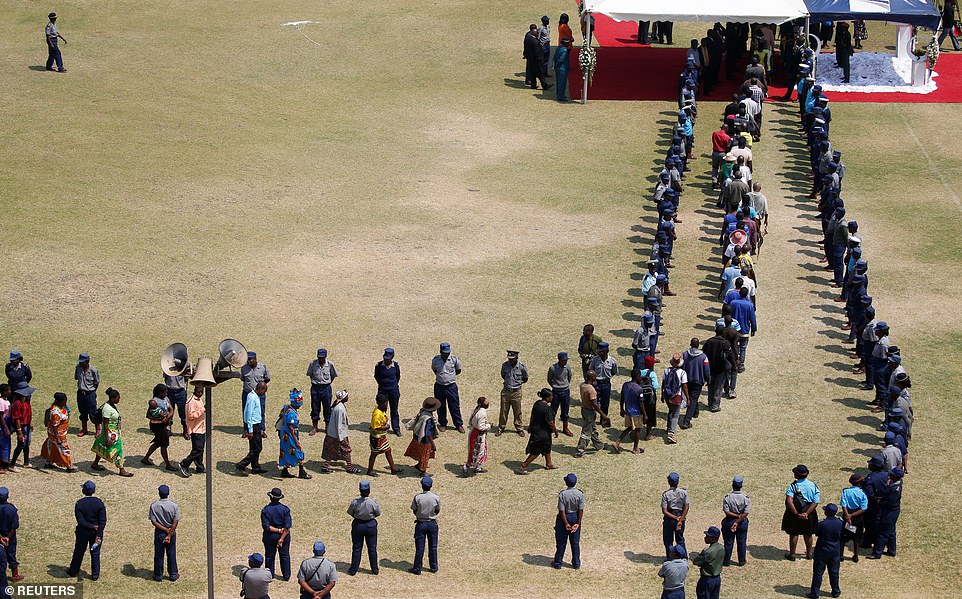 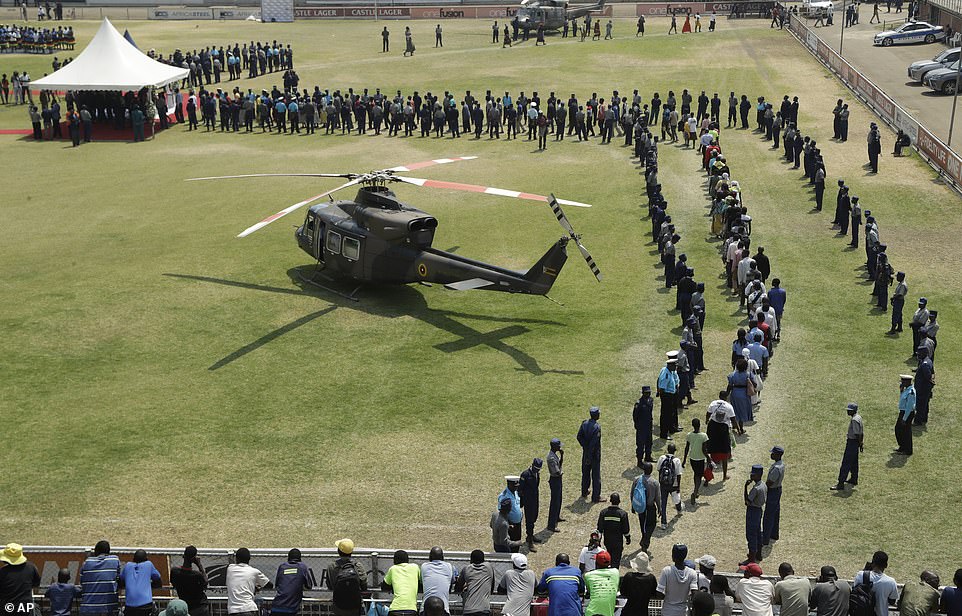 Hundreds of well-wishers sat in a marquee on a lawn in front of the house, waiting to pay their respects.

The opposition MDC said on Wednesday it had postponed its 20th anniversary rally because of Mugabe’s funeral.

‘Notwithstanding our legendary differences with Mr Mugabe, we have no reason to exhibit barbarity by hosting a national festivity during his funeral,’ it said in a statement.

Mugabe came to power in 1980 as the founding leader of Zimbabwe, initially hailed as a liberator after the country became fully independent from British rule.

But his own reign was marked by murder, bloodshed, torture, persecution of political opponents, intimidation and vote-rigging on a grand scale.

The economy of a mineral-rich country descended into chaos with thousands of people reduced to grinding poverty.

Since coming to power, Mnangagwa promised reforms that would lift economic growth and create jobs but he has made little progress.