EXCLUSIVE: Robert Redford wore two pairs of tight underpants to ‘protect himself’ from Barbra Streisand during sex scenes in The Way We Were because she was ‘infatuated’ with him and he thought she was not a ‘serious actress’, new book reveals

Robert Redford wore two pairs of tight underpants during sex scenes with Barbra Streisand in the classic movie The Way We Were to ‘protect himself’ from the actress who was ‘infatuated’ with him, according to a new book.

The Hollywood legend, now 86, had been reluctant to work with Streisand, 80, and even put on ‘two athletic supporters’ before getting into bed with his co-star for the first time.

Author Robert Hofler lifts the lid on the tension and drama between the two stars in The Way They Were: How Epic Battles and Bruised Egos Brought a Classic Hollywood Love Story to the Screen, released on January 24.

The book reveals details of the tortured pre-production, filming, post production of the 1973 romantic movie that earned Streisand an Oscar nomination for Best Actress. 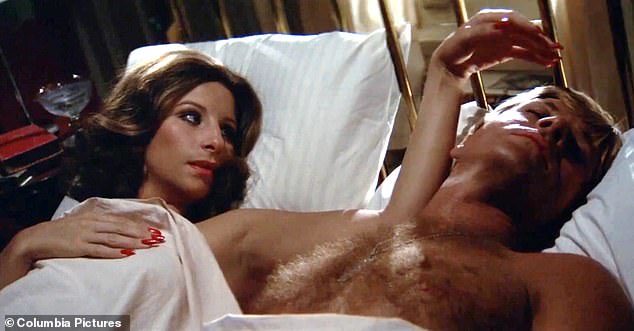 The first time their characters had sex, Barbra Streisand had to rouse Robert Redford from a drunken slumber 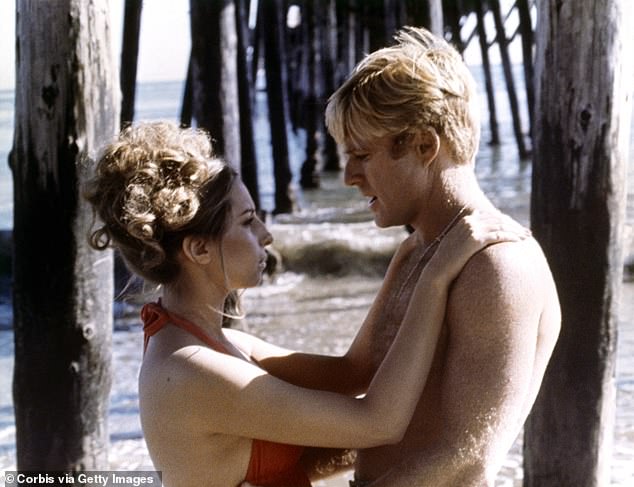 But according to the author, Redford originally didn’t want to get involved with a woman he didn’t consider a ‘serious actress’ and wanted to ‘protect himself’ as he was a happily married father of four.

Streisand, meanwhile, was ‘mesmerized’ by Redford’s physical beauty and desperately wanted to get it on with him.

She even wore a bikini for their sex scene, but Redford doubled up on his underpants and made very sure the scene was ‘pretty-G rated’, according to Hofler.

The movie was shot between August and November 1972 when Redford was 36 and Streisand was 30.

The book reveals that during their second sex scene, Redford refused to say the line: ‘It will be better this time’ because he thought people would think he was a flop in bed in real life.

As Hofler, the theater critic for website TheWrap, puts it: ‘Redford was never bad in bed’ so his character couldn’t be either. 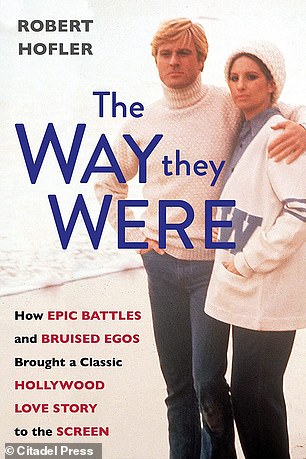 Robert Hofler reveals new details of the 1973 film’s tortured pre-production, filming, post production in new book, The Way They Were

Despite their differences, the characters marry and move to California to pursue Hubbell’s dream of being a screenwriter until their old tensions resurface.

The film proved to be a critical and commercial hit and won two Oscars including Best Original Song for ‘The Way We Were’, sung by Streisand, which also reached number one on the Billboard Hot 100.

But according to the book, Redford initially wasn’t even interested in the script and told director Sydney Pollack that his character Hubbell was ‘camp’.

Worse than that, Redford thought that Hubbell was a ‘Ken Doll’.’

Pollack began eight months of ‘incessant wooing’ to get Redford to agree or, as Pollack put it: ‘Eight months beating him to death in order to get him to do it’.

One of the major obstacles he had to overcome was Redford’s reluctance to work with Streisand.

He did not think she was a ‘serious actress’ because she ‘had never been tested’, he complained – her previous movies had been musicals and lighter fare.

Redford said: ‘Her reputation is as a very controlling person. She will direct herself. It’ll never work.’

He even objected to her background as a singer, saying: ‘She’s not going to sing, is she? I don’t want her to sing in the middle of the movie.’ 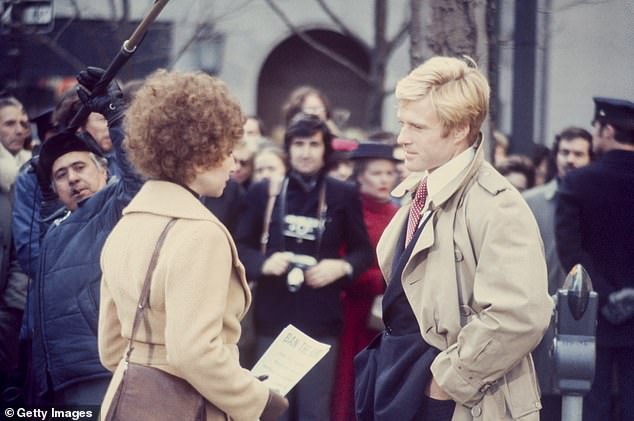 Redford said: Streisand’s ‘reputation is as a very controlling person. She will direct herself. It’ll never work’ 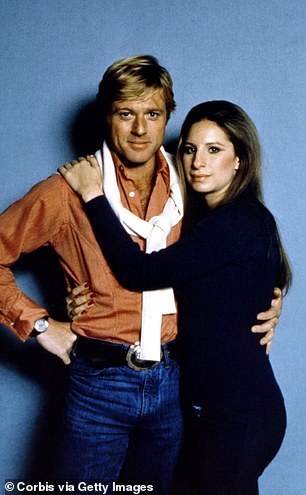 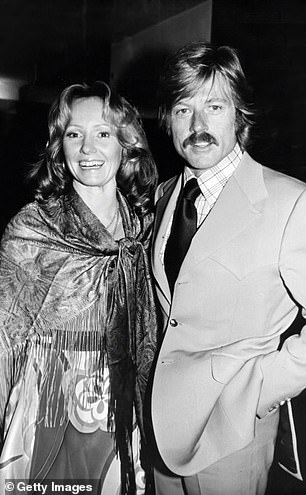 Redford was married to first wife Lola (right) at the time he made The Way We Were with Streisand. They divorced in 1985

There was bad blood between Ray Stark, the movie’s producer, and Redford with the actor saying that The Way We Were felt like ‘another Ray Stark ego trip – I don’t even want to read it.’

Stark dismissed Redford as an ‘ungrateful upstart’ but Pollack fought to keep him in the movie.

Matters came to a head when Stark issued Pollack an ultimatum to get Redford on board or he would give the part to someone else – Ryan O’Neal was another name being considered.

Only then did Redford agree to do it after being offered $1.2million to Streisand’s $1million to ‘assuage his ego.’

But he then refused to meet up with her, supposedly because he believed ‘very strongly in the strangeness (between actors) that contributes to chemistry in a movie’, Hofler writes.

When they eventually met for dinner, Streisand immediately became ‘infatuated’ with her co-star and, according to Pollack, ‘had a crush on him even before we started.’

Redford tried to set strict boundaries and told Streisand: ‘If we’re going to be able to work together you have to keep in mind that anything I tell you about myself will be volunteered because I want you to know it. Not because you think you have some kind of right to know it.’

According to the book, Streisand loved strong men, and Redford’s speech drew her to him even more. 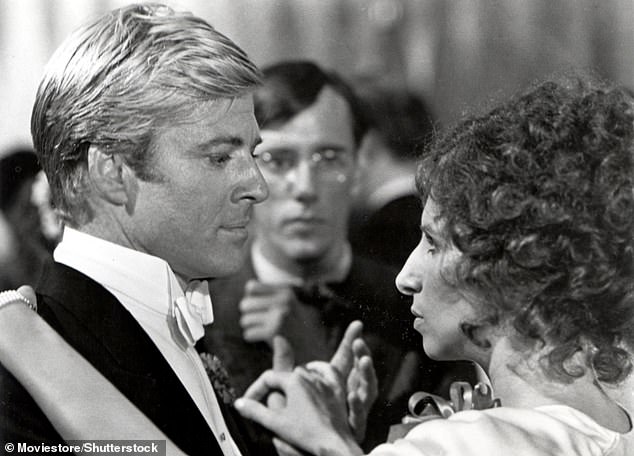 According to Hofler, Redford only agreed to make the movie after being offered $1.2million to Streisand’s $1million to ‘assuage his ego’ 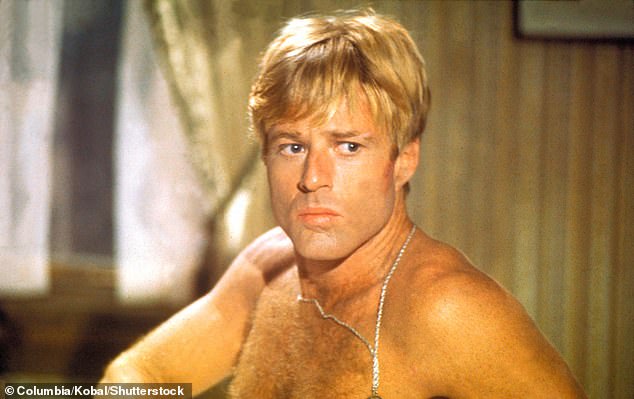 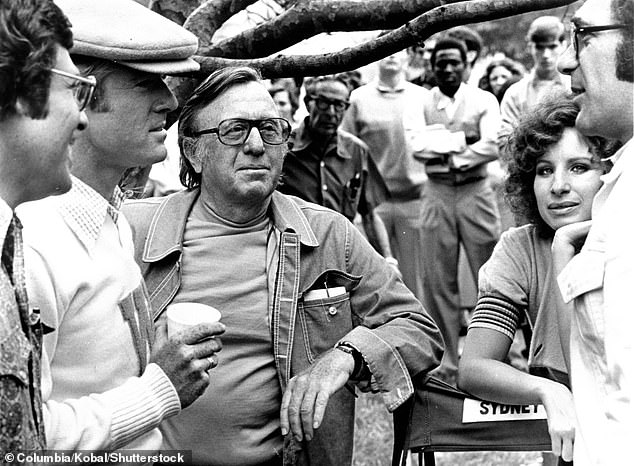 Actor Robert Redford, producer Ray Stark, Barbra Streisand, director Sydney Pollack on the set of The Way We Were

The ‘unconventional’ chemistry between the two leads was exactly what the film called for, and when they finally did sit down for their first reading it was like a ‘lightning bolt’ went off in the room.

But after a few last minute delays – Redford was attacked by a bat on his Utah ranch and had to undergo painful rabies shots – shooting started in September 1972 on the Union College campus in Schenectady, New York.

The town wasn’t geared up for A-list Hollywood stars and Redford holed up in the local Holiday Inn while Streisand rented a Victorian mansion for herself and her five-year-old son.

Her hair and makeup people howled with outrage at being forced to fly coach from Los Angeles but they boarded the flight when told by the producers it was that or nothing.

Immediately Streisand began to wear on Pollack and Redford by asking ‘incessant questions.’

She ‘peppered’ the director with queries to the point where he thought to himself: ‘Will you just relax?’

He became known on set for his ‘extreme nonchalance’ while Streisand was a study in ‘chronic anxiety.’

One student told a reporter with the Post-Star and Times, a local newspaper: ‘Streisand is hard to work with. She disappears often and we have to wait. She’ll never mingle with us and always leaves at lunchtime. Redford will talk with us and he fools around quite a lot.’

At 11 every evening Pollack would get a long phone call from Streisand going over what happened that day and plotting what would happen the next.

According to Pollack, it as ‘not a problem, it’s just time-consuming.’ 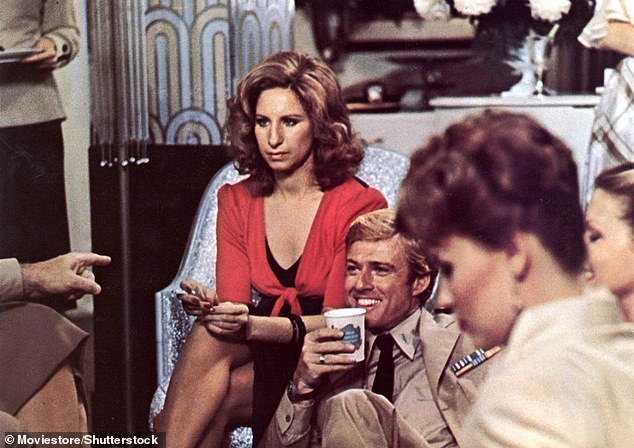 Both leads wanted their left sides of their faces to be featured, Redford because he didn’t lie the moles on his right side and Streisand because she thought it made her nose look smaller 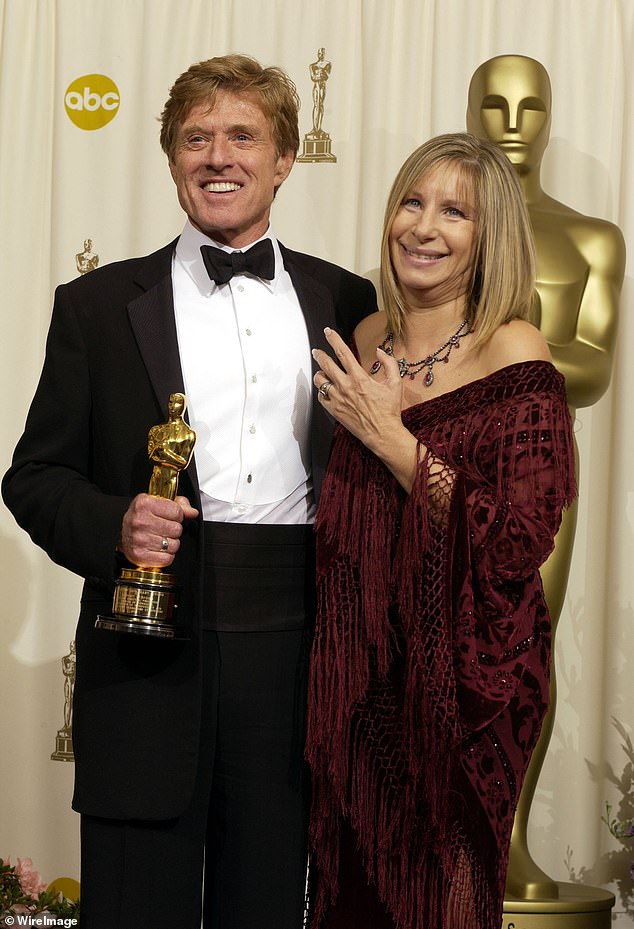 The film proved to be a critical and commercial hit and won two Oscars including Best Original Song for ‘The Way We Were’, sung by Streisand. They are pictured at the 2002 Academy Awards when Streisand presented her former co-star with an honorary Oscar

The two leads did share one thing in common: wanting the left side of their face to be on camera, which created problems during a number of scenes.

Harry Stradling Jr, the cinematographer, said that during scenes shot in New York City they had to erect canopies everywhere to block the light from hitting Streisand’s face because her nose looked ‘terrible.’

Redford also insisted on his left being shown whenever possible because he didn’t like the three moles on the right side of his face.

During a prom scene where they danced together, Streisand ‘froze’ because the camera was showing the bad side of her face.

According to Hofler, it was a ‘discomfort about her nose’ that was the reason why and Redford deliberately positioned her that way to ‘play with (her) head.’

Streisand looked forward much more to the first love scene and according to one member of The Way We Were cast cited in the book, she had ‘affairs with many of her leading men.’

In the scene Streisand gets into bed with Redford whose character is passed out drunk. She revives him and they have sex.

Hofler writes: ‘To protect himself in more ways than one, (Redford) wore two athletic supporters for his love scene with Streisand, who chose to don a bikini.’

According to Pollack it ended up being ‘pretty G-rated’ so the producers could get a PG rating.

As Hofler writes, it wasn’t clear from the film if Redford ‘actually inserts himself’ and neither character seems to reach an orgasm.

In the novel the movie was based on, the characters do have sex and describes how described it as a quick encounter in which Redford’s character climaxes, but not Streisand’s.

It was a simple scene but there were a ‘lot of takes’ and after a while Redford lost patience, leaving Pollack to inform Streisand: ‘I think we’ve got it.’

When asked about the scene by reporters Redford would joke that he had ‘nothing on but the radio’ during the shooting.

‘To another reporter who asked what he was wearing, he said: ‘Aramis.’

The second sex scene sprang out of the two leads feeding each other grapes and, as the temperature rose, Hubbell tells Katie: ‘It’ll be better this time.’

But Redford point blank refused to say the line, despite being told to do so by the producers.

Hofler writes that the problem was that it contrasted with Redford’s self image as a stud.

He writes: ‘Redford was never bad in bed. So how could Hubbell be?’

Stark insisted that Redford should say the line because it was Hubbell ‘showing some humanity and maybe even some regret for the way he treated Katie in his previous drunken state of lovemaking.’

The producer believed the line was in no way an indictment that Hubbell i.e. Redford, was ever bad in bed and in fact he looked ‘chivalrous’.

Stark sent a dozen memos to Pollack trying to get Redford to say the line, turning the scene into an ‘Albatross’ before Stark finally accepted that it would never happen.

Redford drew a line during another scene that questioned his appearance.

In a scene when Streisand brushes Redford’s bangs he was supposed to say that they were ‘gray’ but he wouldn’t utter the words.

The scene would have another unintended effect: for years strangers would come up to Redford and try to brush away his bangs just as Streisand did, much to his ‘horror.’

During post production Stark returned to insisting the ‘it’ll be better this time line’ should be included.

He worried that Hubbell would look like a ‘s**t’ without it and that the words gave him an ’emotional connection to the audience.’

Redford still refused to do it and it didn’t appear in the movie.

Once the film became a hit, a sequel was discussed but once again it was Redford’s reluctance that sank it.

He insisted he never had any interest in making a second part, once saying: ‘I didn’t, but Barbra did’.