Gump’s owner John Chachas joined ‘Fox & Friends’ to discuss the rampant crime plaguing the city, which he argued goes beyond the rhetoric of the mayor.

The KRON4 crew was in Oakland covering a story on a recent smash-and-grab robbery when shots were fired around 12:20 p.m. and the security guard was wounded.

The unidentified guard was recovering at a hospital where he underwent surgery and remains in stable but critical condition, Jim Rose, vice president and general manager for the news station, told Fox News.

CALIFORNIA NORDSTROM RANSACKED BY 80 LOOTERS IN SKI MASKS WITH CROWBARS AND WEAPONS: WITNESS 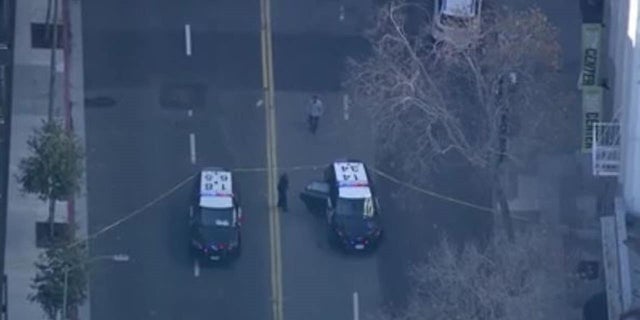 “Our reporter was not physically injured but is understandably shaken,” Rose said. “At KRON 4, the safety of our personnel is our top priority, which is why we assign security to reporters when working in the field.”

“Most importantly, our thoughts and prayers are with the security guard and his family, and we wish him a complete recovery,” he added.

Authorities were asking any businesses or nearby residents with surveillance cameras to check for footage of the attack.

“As you know it’s been an extremely violent week. We are asking if you were in the area, have a business or live nearby to please check your surveillance footage as you may have captured the crime before, during or after it occurred,” Oakland Police Officer Kim Armstead said in a video message.

The shooting came amid a wave of smash-and-grab burglaries targeting Bay Area retailers that have put the public and businesses on edge. On Monday, looters ransacked an Oakland clothing store and took anything they could grab in just a few minutes.

The police department has warned of armed caravans roving the city and targeting clothing stores, pharmacies, retail shops and cannabis dispensaries. On Wednesday, It said staffing will be increased to address the matter.

In a ten-hour period on Saturday, multiple businesses were burglarized and several shootings occurred, he said.

“I need help from the leaders of this city that amid 124 homicides there hasn’t been one call for an emergency meeting to discuss gun violence in the city of Oakland,” Armstrong said. “I’m asking council members to step up and start having a conversation about the loss of life in this city. Beyond the politics of whether you support the police, there is a clear problem in this city and that this city had to deal with overwhelming violence over the weekend and it’s unacceptable.”

Across the bay in San Francisco, organized theft rings ransacked multiple shops over the weekend, including a Louis Vuitton shop in Union Square where thousands of dollars in merchandise was stolen. Nine people have been charged in that case.

Other cities like Chicago and Los Angeles are also dealing with a wave of robberies involving organized theft rings.