University life starts early for many students at Reservoir High.

Classes in such subjects as science and global politics are held at La Trobe’s nearby Bundoora campus, while VCE students can also study up to two university subjects online while still at school. 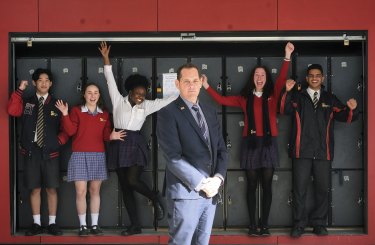 “It provides that physical connection for our students, that modelling that you can go to university,” principal Andrew McNeil said of the long-standing connection between La Trobe and Reservoir High.

The school in Melbourne’s north-east is highly diverse: 65 flags adorn the walls of the entry lobby, one for each nationality represented by the student cohort. It also services a community with high levels of disadvantage: about half of its students live in public housing and 7 per cent are of Aboriginal and Torres Strait Islander heritage, a high proportion among Melbourne secondary schools that Mr McNeil says enriches the school culture.

The link with La Trobe University was also important because many students had parents who went there in their own quest to gain qualifications, Mr McNeil said.

“I don’t like to say that we’re a disadvantaged school; we’re an aspirational school,” he said.

Reservoir High’s aspirational culture is reflected in its steadily improved academic results at VCE level over the past 10 years, leading The Age to name the school its 2021 Schools that Excel winner among government schools in Melbourne’s north.

You can view the full list of winning schools, and explore the data for your high school using this year’s Schools that Excel dashboard.

The award follows the school’s best VCE median score in the past decade last year of 28, rising from 25 in 2015 and two points shy of the statewide median. Mr McNeil said the school was aiming to hit that mark this year.

Improved results had also come about through a stronger focus on respect and discipline, he said.

The school banned mobile phones on school grounds well before the Andrews government brought in its statewide ban, for example, as part of a wider decision to focus on explicit teaching in the classroom and minimise the use of technology.

Mr McNeil says the curbs on classroom tech are there for two reasons: to make sure the teacher, not a screen, is the focus of each student’s attention; and a drive to create an orderly culture of “high expectations” in every classroom.

“Teachers teach and that’s what we do here,” Mr McNeil said.

The emphasis on explicit learning draws on a model called gradual release of responsibility, or “I do, we do, you do″⁣, which help students build their skills and knowledge over time.