London: Prime Minister Boris Johnson said a second lockdown would be "disastrous" for the British economy, as he appeared to pour cold water on his earlier optimism of rapid, pregnancy-style coronavirus infectiousness tests by Christmas.

Appearing before the Commons Liaison Committee for only the second time since his elevation into Downing Street in 2019, Johnson said that the science behind the so-called "freedom passport" tests was still some way off.

"I don't want a second national lockdown," Johnson said. "I think it would be completely wrong for this country and we are going to do everything in our power to prevent it." 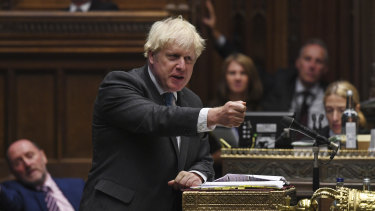 "I very much doubt that the financial consequences would be anything but disastrous," he added.

He defended his decision to restrict social gatherings from 30 to just six people – a measure which many of his own backbenchers have strongly criticised as too draconian.

Johnson said COVID-19 was gaining hold across the country and it was vital to defeat it.

Just last week, he suggested that rapid turnaround tests that would be used by the bulk of the population on a daily basis could be key to having a normal Christmas. 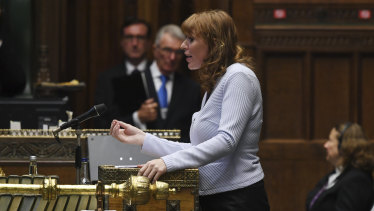 Shadow First Secretary Angela Rayner said the next London to Durham trip will be for a COVID test.Credit:AP

The government says there has been an "understandable" rise in people seeking tests to prove that they are negative and can go about their life and is urging healthy people to leave the tests for only those with symptoms.

The demand has seen Britons seeking tests told to travel hundreds of miles to access the nearest available one, prompting Angela Rayner, the Deputy Labour Leader, to quip that the "next time a man with COVID-19 symptoms drives from London to Durham it will probably be for the nearest COVID test."

Rayner made the jibe, referencing Johnson's controversial chief aide Dominic Cummings who breached lockdown rules, during Prime Ministers Questions when she was standing in for leader Keir Starmer who was isolating at home.

A total 221,192 tests were processed across Britain in the last 24-hour reporting period and more than 20 million have been carried out in total, prompting the government to boast that it is testing more than any other European country.

Johnson promised that testing capacity would be increased to half a million per day by the end of October.

The Prime Minister expressed fears that a surge in infections, which increased by another 3991 on Wednesday — the highest single-day increase since May — would lead to more deaths.

The UK's most recent daily death toll where a person who had died and had tested positive for COVID-19 within the last 28 days was 20.

The daily death rate has remained below 20 since mid-July although cases of infection have been on the rise since at least August.

The number of hospitalisations has slightly risen over the past week, with 141 new admissions on Wednesday.

Our weekly newsletter will deliver expert analysis of the race to the White House from our US correspondent Matthew Knott. Coming soon. Sign up now for the Herald‘s newsletter here, The Age‘s here, Brisbane Times‘ here and WAtoday‘s here.