A Federal Court judge has approved a defamation settlement between Daily Telegraph columnist Miranda Devine and a nine-year-old Indigenous boy, after she apologised for tweets suggesting he faked being a bullying victim.

On Friday, Justice Anna Katzmann said she was satisfied the confidential settlement, including a "not insubstantial" amount of money, was in Quaden Bayles' best interests. The court was required to approve the settlement because he is a minor, and the court heard such claims were unusual. 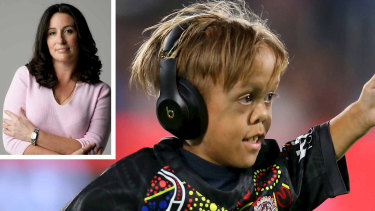 Quaden Bayles was suing Miranda Devine over comments made on Twitter.Credit:SMH

The Brisbane school boy, who has achondroplasia dwarfism, launched defamation proceedings against Devine and her employer Nationwide News in July over a series of tweets from her Twitter account in February that raised questions about whether a viral video in which he cried after being bullied at school was "a scam".

The case was brought on his behalf by his mother Yarraka, who was also suing Devine in her own right for suggesting she "coached" Quaden.

Nationwide News, the publisher of the Telegraph, had taken the unusual step of briefing a lawyer to appear only on its behalf in court. It claimed tweets from the prominent columnist's public Twitter account, which identified her as an employee, were "private" and unrelated to material it published.

Devine did not appear in court, either in person or via a lawyer, until the settlement hearing on Friday when Holding Redlich partner Susan Goodman appeared on her behalf.

The settlement covers all four parties including Nationwide News. It is unclear whether either or both Devine and the company will cover the settlement plus legal costs.

Justice Katzmann said the settlement involved "pecuniary and non-pecuniary" elements and the money would be paid into a trust for Quaden, with his parents appointed as trustees.

The terms of the settlement are confidential but reports have suggested the family will receive almost $200,000.

The barrister for the Bayles family, Sue Chrysanthou, said Devine had tweeted a "sincere and detailed apology" last Saturday and "those sorts of apologies can't be ordered by the court".

Devine, who is on secondment at The New York Post, tweeted: "In February this year I posted some comments on my personal Twitter account about Quaden Bayles and his mother Yarraka.

Yarraka Bayles said the family was "very happy with that settlement" and "very appreciative" of their lawyers.