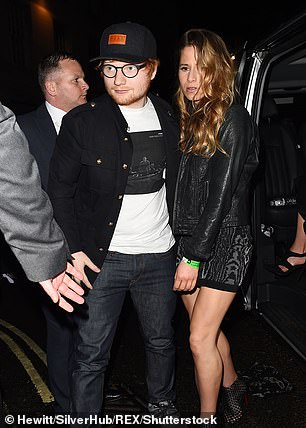 Ed over heels: Ed Sheeran out with his wife Cherry Seaborn in London in February

He hasn’t released any new music since his 2017 album Divide.

Yet that hasn’t stopped Ed Sheeran doubling his £80million fortune thanks to sold-out concerts and the continued success of the record worldwide.

In 2018 the singer earned more in a single year than any other musician and is now worth £160million, according to The Sunday Times Rich List.

The rise was driven by his world tour for Divide, which was the third-highest selling album last year and has now sold 16million copies worldwide.

The 94 gigs promoting the album grossed more than £340million as he played to nearly five million fans, including four sold-out dates at the 70,000-capacity Wembley Stadium.

But the Suffolk-raised singer, 28, who married childhood friend Cherry Seaborn in a private ceremony just before Christmas, hasn’t earned anywhere near enough to top the music rich list. 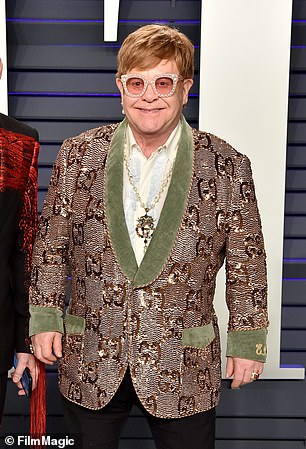 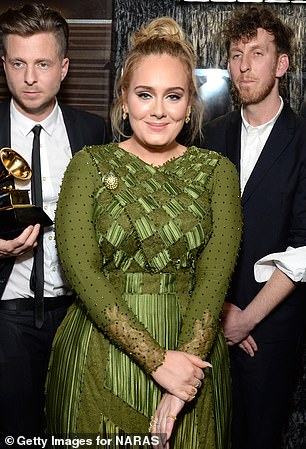 The singer, 28, is the 17th richest musician in the UK. Adele (right) remains the highest-paid female star with a fortune of £150million. Sir Elton John, 72, (left) is fourth richest with £320million

No1 spot goes to Andrew Lloyd Webber, who is worth £820million.

The impresario’s fortune grew by £80million last year as his musicals continued their run of success around the world, including a record-breaking 32nd year on Broadway for Phantom of the Opera.

Sheeran is the 17th richest musician in the UK in a male-dominated list which sees Adele and Enya as the only women singers in the top 30. 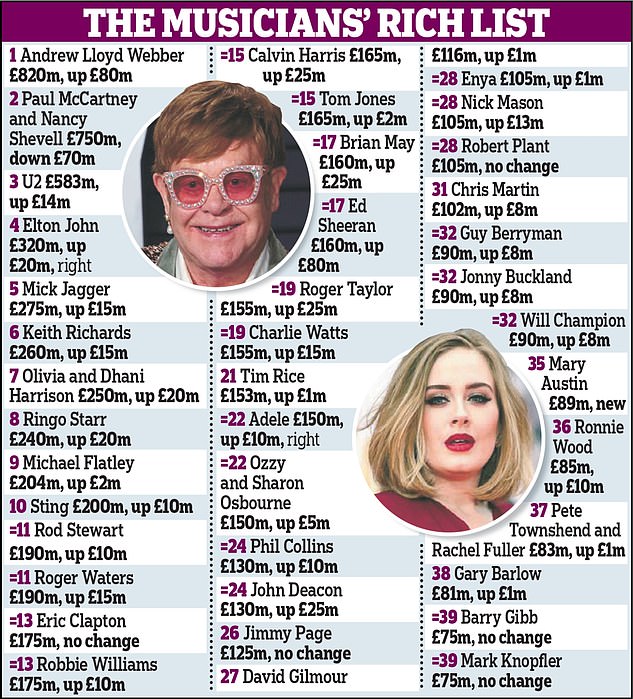 Adele remains the highest-paid female star with a fortune of £150million.

Robert Watts, compiler of the list, said: ‘A perfect year for Ed Sheeran has seen the flame-haired singer-songwriter earn more than any other musician has ever done in a year.

‘Modest, hard-working and still only 28, we believe he has the potential to become the first British musician to reach billionaire status.’

The 31st annual edition of The Sunday Times Rich List will be published this Sunday.