The shameless act of hooliganism was snapped by an onlooker from the window of a nearby tall building just before midnight, with the car screeching around the Ford police cruiser multiple times as passengers sat on the vehicle’s open windows.

‘No f****** way,’ onlookers could be heard yelling as the car drives by. ‘Oh sh**, oh sh**.’ Another onlooker was filmed clambering onto the cop car’s bonnet moments later.

Despite the dangerous behavior, Philly PD did not make any arrests.

Shortly before they arrived, the same group were filmed spinning donuts on the wide intersection outside Philadelphia City Hall as their cronies blocked traffic,

Some set off fireworks as the cars passed by, but miraculously did not hit any onlookers.

‘We really lawless as sh**,’ one onlooker titled their video.

Cops were eventually able to move the racers on and restore the normal flow of traffic.

Philadelphians could later be seen dancing on top of the cop cars before the police were able to break up the crowd.

NBC Philadelphia reports that police are now investigating the incident. 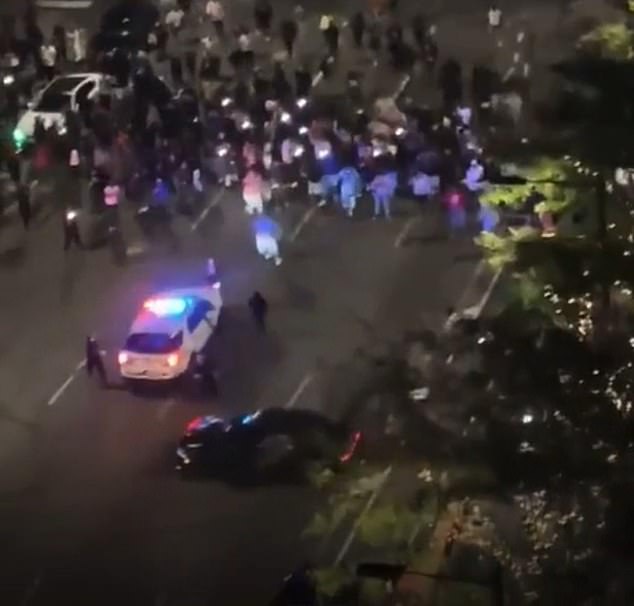 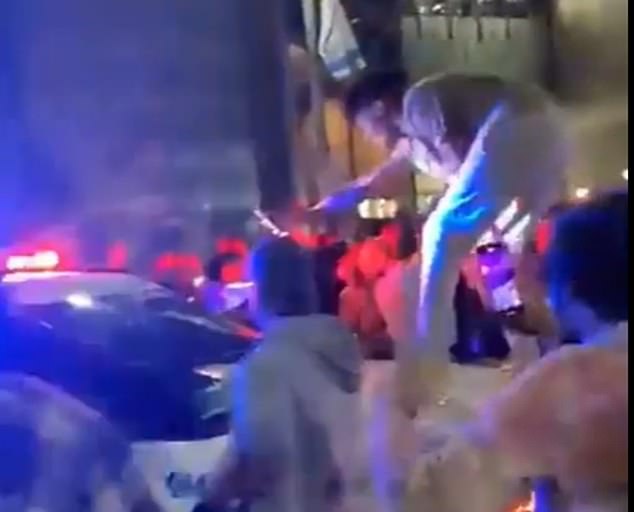 Soon, people could be seen jumping on top of the police cars and dancing Some people even set off fireworks at the Center City intersection

The chaos came just one weekend after a similar incident near Temple University left students running, when a car trying to get through an intersection where two cars were doing donuts started opening gunfire.

Nobody was injured in the attack, NBC reports, and the police are now investigating that incident as well.

Meanwhile, crime has been rising throughout the City of Brotherly Love.

On Thursday, there was a double shooting outside the Tender Touch Lounge, which left one man dead and another in stable condition.

Then at around 11.30am on Friday, a man armed with three ‘spring shot’ homemade guns and a knife shot a security guard in the head at a Philadelphia office complex, before heading to the Pathways to Housing PA’s office on the third floor.

A contact team for the Philadelphia Police Department entered the building and found the alleged gunman, 59-year-old Wayne John Dorylis, who surrendered after being ordered to drop his weapon.

He is charged with murder, causing/risking a catastrophe and weapons charges, FOX 29 reports.

In a subsequent Facebook post, Pathways to Housing PA said Dorylis was previously charged with making threats against staff members, but had not been in contact with the agency in over 18 months.

‘We are both grateful that staff and participants are safe, and full of grief to learn that a victim of todays shooting has passed away.

‘Our hearts go out to the victims’ family.’ 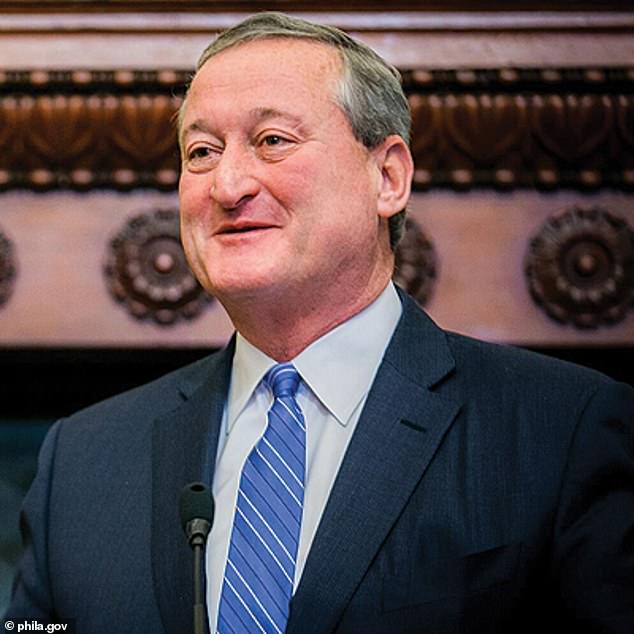 Philadelphia Mayor Jim Kenney said on Thursday the city has surpassed 400 homicides this year, and he lays awake wondering what he could do about it 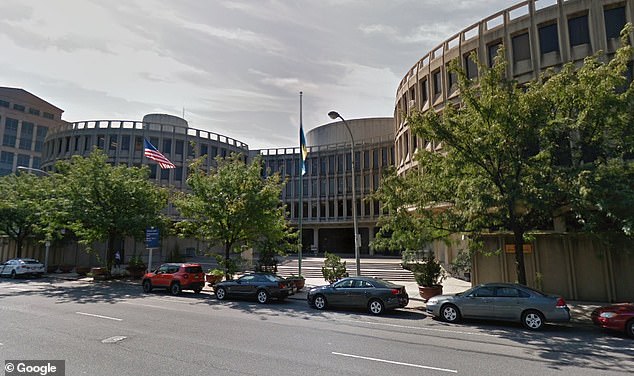 According to statistics released by the Philadelphia Police Department, which has its headquarters seen here, there has been a 17 percent increase in the number of homicide victims so far this year, with 20 homicides reported between September 20 to September 26

Later that night, at around 9pm, police found a 64-year-old man suffering from stab wounds to his stomach at a home in the Queens Village section of the city, and rushed him to the hospital where he was later pronounced dead.

Then just about two and a half hours later, a shooting at a parking lot at a Wawa convenience store left a 25-year-old man dead and a 24-year-old man suffering from gunshot wounds to his foot.

And just a few hours before the scene at Center City, a shooting Saturday night sent three people to the hospital, including one victim who was shot in the face and abdomen, according to FOX 29.

Two of the men, ages 31 and 36, were shot multiple times in the hands, and a 30-year-old man was hit in the face and abdomen. They are all expected to survive.

It is unclear what sparked the shooting.

But according to Philadelphia crime statistics, there has been a 17 percent increase in the number of homicide victims so far this year when compared to the same time period last year, with 20 homicides reported between September 20 to September 26.

There were also 73 shooting incidents, resulting in 67 victims during the one-week frame, with 60 robberies involving guns and 78 aggravated assault arrests involving guns.

Additionally, there were 43 robberies and 127 aggravated assaults that did not involve a handgun.

And on Thursday, Mayor Jim Kenney said: ‘Three nights ago we hit over 400’  homicides for the year.

‘I didn’t sleep the whole evening,’ he said at his bi-weekly crime briefing. ‘I looked at my ceiling, on my back, that entire night and tried to figurer out how we fix this.’