A teaching union was last night dealt a humiliating blow after it failed to get enough votes to support a walkout.

Just 42 per cent of the primary and secondary staff balloted by NASUWT turned out to vote in what has been described by MPs as a ‘win for parents and pupils’.

It means the teachers cannot legally walk out, despite nine out of ten members who voted opting to strike in England and Wales.

The union said it remained in dispute with the Government despite not achieving the 50 per cent ballot turnout required by law. 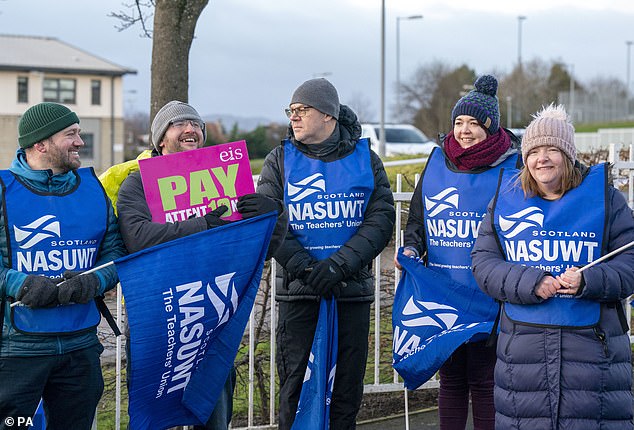 Just 42 per cent of the primary and secondary staff balloted by NASUWT turned out to vote. Pictured: Members of NASUWT union join the picket line at Craigmount High School in Edinburgh on Wednesday 11 January

MP Jonathan Gullis said the result proves the ‘selfless’ nature of teachers and that militant unions ‘do not speak for the majority’.

He added: ‘Today’s result is a big win for parents.

‘It is a great win for teachers. Despite all the challenges that teachers face and all the things that they want us as a government to do, it shows their selflessness and the fact that they will always put young people first.

‘But the biggest winners in all this are the pupils. They can sit in a classroom in front of their expert, the teacher.’

Fellow Tory MP Robin Walker, chairman of the education committee, added: ‘It is clearly a relief and I think it is a good thing for the school system if we can avoid a strike. I hope there will now be constructive engagement between the Government and unions to make sure that we can avoid further disagreements.’

The NASUWT vote came hours before it was announced that universities will be hit with the biggest series of strikes ever to affect higher education.

The University and College Union said more than 70,000 staff at 150 universities will strike for 18 days between February and March in disputes over pay and conditions.