Calm prevailed outside heavily fortified state capitol buildings across the US as Joe Biden was sworn in as President.

The FBI had warned of the possibility for armed demonstrations leading up to the inauguration after President Donald Trump repeatedly and falsely claimed the election was stolen from him.

Fewer than a half-dozen demonstrators showed up outside the capitols in Concord, New Hampshire, and Lansing, Michigan. 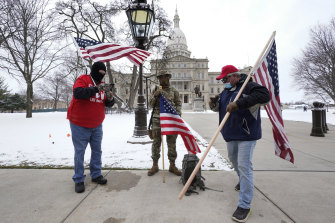 Protesters stand peacefully outside the state capitol in Lansing, Michigan during the inauguration. Credit:AP

A lone protester wearing a “Make America Great Again” hat stood outside a chain-link fence surrounding the California Capitol in Sacramento, as dozens of police officers and National Guard troops guarded every entrance.

Three protesters were outside the Nebraska Capitol in Lincoln, one waving a flag that read “Biden is not the president.”

Shortly after noon, as Biden became President, QAnon conspiracy spruiker Ron Watkins, whom many thought was the original Q 'prophet', resigned via a note on his Telegram channel.

Believers of the preposterous but widespread fantasy held that Trump was battling a cabal of Satanic paedophiles who ruled the world, and many followers thought that Democrats would be arrested en masse at the inauguration.

Instead, Watkins told them to be peaceful.

"We have a new President sworn in and it is our responsibility as citizens to respect the Constitution," Watkins wrote. "As we enter into the next administration please remember all the friends and happy memories we made together over the past few years."

Michigan lawmakers had cancelled a session scheduled for Wednesday out of caution. But in Wisconsin, legislators planned to move ahead with a committee hearing that was to be open to the public.

Around 25,000 Nations Guards were deployed to Washington DC to guard the inauguration and the city was heavily fortified and locked down after the siege on the Capitol building on January 6 by pro-Trump supporters overran the building, temporarily halting the certification of the electoral vote.

Almost 100 people have been arrested in connection with the riots so far, and on the day before the inauguration, the FBI laid the first charges of conspiracy connected to the siege.

Thomas Caldwell, a 66-year-old Virginia man identified as a member of far-right militia group the Oath Keepers, and two others from Ohio, are accused of sending messages threatening to seal escape tunnels and "turn on gas", and to storm Ohio's state capitol.

On January 13, federal agencies issued a joint intelligence briefing declaring that this month’s siege of the US Capitol could end up being a “significant driver” for further violence by right-wing domestic extremists.

Former president Donald Trump was impeached for the second time by the House of Representatives on January 13, 2021 for "incitement of insurrection" for his fiery speech at a rally just before the siege, and his role in inspiring the violent protest will be the chief matter considered at his post-presidential Senate trial.

US power and politics

Understand the election result and its aftermath with expert analysis from US correspondent Matthew Knott. Sign up here.