Close to half of teenage girls considered self harm compared to only 18 per cent of boys, with three times as many girls as boys saying they had acted on these thoughts and injured themselves.

Research based on a survey of 6000 adolescents across Australia has alarmed experts who believe the worst is yet to come after nearly two years of lockdowns, homeschooling and isolation. The study was undertaken before the pandemic began. 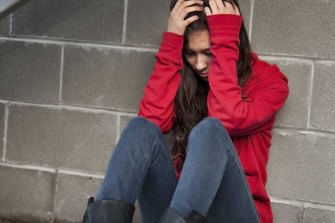 Close to half of teenage girls considered self harm compared to only 18 per cent of boys.

The research on self-injury by the Australian Institute of Family Studies (AIFS) found girls were more likely to consider self harm and hurt themselves. About a quarter of girls acted on these thoughts, and had hurt themselves, compared to nine per cent of boys.

The “scary” results were concerning in the light of worsening mental health among young people, said Dr Pilar Rioseco, a co-author.

It found one in three of all adolescents had considered self harm – with rates rising to 55 per cent for teenagers who identified as lesbian, gay or bisexual.

And of those boys and girls who injured themselves repeatedly, 65 per cent reported attempting suicide at age 16 to 17, the study found.

The institute surveyed about 3000 adolescents aged 14 to 15, and 3000 aged 16 to 17 as part of the Growing Up in Australia longitudinal study that has tracked the lives of children and their families since 2004.

“Navigating your way through the world as a young person can be challenging and it’s clear that managing self-injury thoughts and behaviours is a critical aspect of adolescent healthcare provision.”

A report by the mental health group Black Dog with Mission Australia released this month found one-quarter of 25,000 15- to 19-year-olds had experienced psychological distress during 2020.

“If we don’t put in place preventative measures, we will be at the pointy end of crisis prevention,” Professor Christensen said. “It is likely that this will get worse because we have things like the pandemic and COVID, we have bushfires, climate change.

“So we really need to do something now if we are going to be in a better position in five or 10 years.”

Nearly all funding on mental health was spent on treatment rather than prevention, she said. This was despite calls by the Productivity Commission and the federal government’s taskforce on suicide, said Professor Christensen, who was a member of the taskforce’s expert advisory panel.

There was also a lack of guidance for schools on what programs worked.

While young women were more likely to self harm, young men were at a greater suicide risk, though that gap was closing.

Professor Christensen said there were scientifically proven programs, such as cognitive behavioral therapy, that could be rolled out online or to schools.

“It really is teaching people that if you think a particular way, it is going to have an effect on your emotions,” she said. “And that you can reverse that by changing the way you think.”

Dr Rioseco said the AIFS study also found children who were close to a parent were less likely to self harm. And the sons and daughters of a parent with poor mental health were at greater risk than others.

What was important for a parent, she said, was “looking after yourself and your own wellbeing and having conversations with the children about mental health”.

The AIFS study found children who attended non government schools – which have invested more in mental health programs – were less likely to self harm.