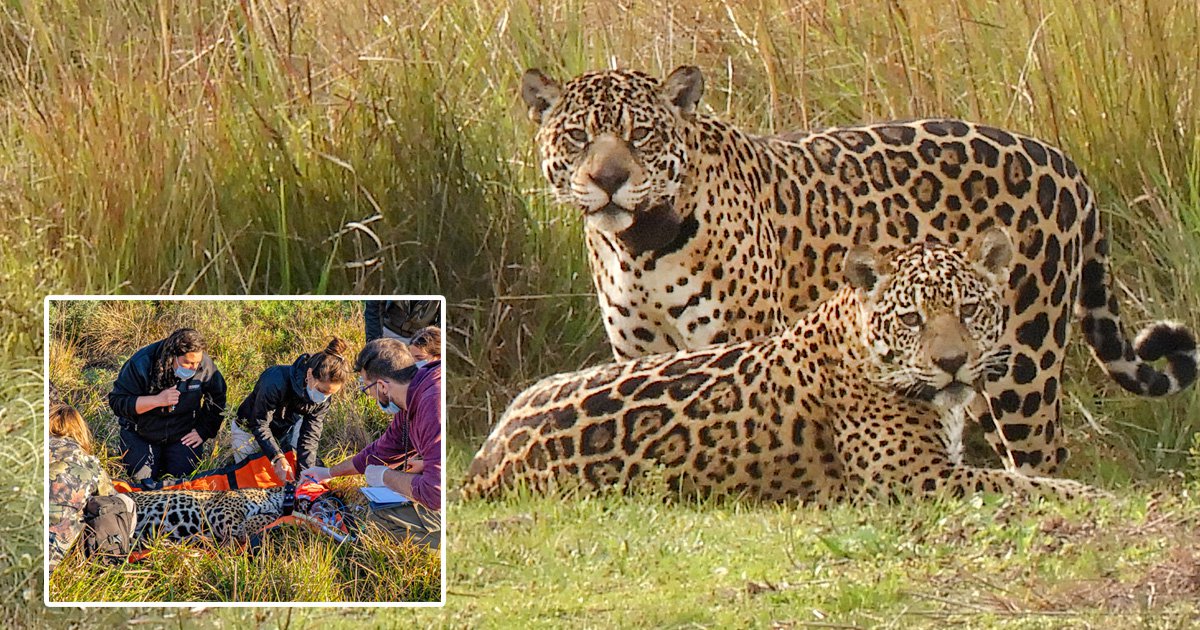 With its luscious forest enclaves, wispy grasslands and serene wetlands, Iberá National Park in Argentina forms a perfect patchwork of green, yellow and blue – the Earth as seen from space unfurled into a rich carpet of life as far as the eye can see.

This idyllic ecosystem, just shy of the country’s north-eastern border with Paraguay, has been transformed into a haven for at-risk species, a new home for once locally-extinct animals including red and green macaws, giant anteaters, giant otters and, after being absent from the region for 70 years, jaguars.

But in this vast wilderness, what difference will a small number of big cats make? An oversized one.

‘Jaguars are a keystone species, meaning they have an outstanding ecological role,’ says Sebastián Di Martino, conservation director at Rewilding Argentina, the organisation driving the project.

‘When they’re not there, the ecosystem fails to function properly, it degrades, and can even collapse.’

Jaguars are also an apex predator, and it is this position, at the head of the food chain, that amplifies their role.

By keeping herbivorous prey in check, jaguars shield the grasslands and forests from overgrazing, helping them to sequester carbon from the atmosphere. A more bountiful region means a more powerful ally in the fight against climate change.

Healthier, more diverse landscapes are also better equipped to recover from natural catastrophes — such as the recent wildlifes that tore through almost 60% of the park, overwhelming attempts to contain multiple blazes far more intense than what is expected of the region.

‘Fire is not uncommon in Iberá’, says Di Martino. ‘They’re normally just one at a time, started by lightning, and they don’t affect a very big area, because they come up against a barrier, such as water, or a humid forest.’

A normal and beneficial part of this particular ecosystem, fires both contain the range of forest patches and encourage the growth of grasslands, maintaining the area’s delicate mix of habitats.

‘The problem is not the fire, but the severe drought we’ve suffered in Iberá for the past two and a half years. So the wetlands don’t have the water they should, and we’re also having higher temperatures than normal.

‘This means there’s nothing to stop the fires, and they’re more intense, so instead of fires that affect one small place at a time, it is now affecting the entire wetland at the same time.’

Fire also poses a bigger risk to wildlife than it once did.

‘The fires aren’t usually a problem for the animals, because they can move to another patch of grassland and wait until it passes, or wait in the wetlands,’ Di Martino says. ‘But the watering holes are now so small they’re ending up surrounded by fire and can’t escape.’

Boundary fences around the outer edges of the park also limit the animals’ maximum range — although serve a greater purpose by keeping domestic cattle out — but they are ultimately wild. Di Martino and his team could not intervene to rescue those already released, but monitored the movements of those with radio tags.

Thankfully, those of known whereabouts escaped the fires, including the park’s founding jaguar population. The ultimate goal is to release 20 big cats, a figure the team believes to be the optimal size for a functional and genetically diverse community to flourish. Di Martino predicts that it will take another decade of managing the jaguar population before it becomes self-sustaining.

‘It’s not just about having the animals present,’ he says. ‘It’s about having enough of them to have an impact on the system.’

And that doesn’t just apply to jaguars.

‘Many of the forests of Iberá now have two bird species that weren’t here ten years ago, the red and green macaw and the bare-faced curassow,’ says Di Martino. ‘They eat fruits and disperse the seeds, which helps the forest recover faster.’

That forest is essential to the region, not just as habitat for wildlife, but for the local economy. While the politics surrounding the park remain complex — cattle ranchers were responsible for starting five of the six major recent fires while clearing land, and are keen to utilise the park for grazing — eco-tourism is booming.

‘We’ve been working in this region for more than 20 years,’ says Di Martino. ‘One thing we’ve done is change the economy for local communities.

‘Cattle ranching is still an important economic activity, but eco-tourism based on wildlife watching is a much more important one, so most of the people depend on the wildlife, not just cattle.’

It is not just locals who depend on Iberá and its residents however. Like the rainforests of the Amazon, central Africa and southeast Asia, the region is one piece in an increasingly fragmented network of carbon sinks across the globe that, without which, the fight against climate change will not be won.

The return of big cat pawprints to the Iberá grasslands is a boon in this battle — one majestic step towards shrinking our own oversized footprints.