London: In the Enlightenment Gallery at the British Museum, a guide ushers her semi-circle of mostly American tourists around a pitted, weathered bark shield.

She paints a vivid picture for them of an Australian Aboriginal tribe’s first experience of white visitors: Captain Cook’s Endeavour 249 years ago.

“For them this was an extraordinary and terrifying event,” she says. “For them, white figures meant death. They had never heard gunfire – imagine how terrifying is that.

“And one of them drops their shield.” 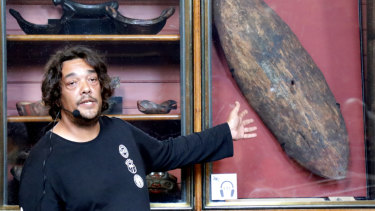 Rodney Kelly speaks in front of the Gweagal Shield at the British Museum.Credit:Martin Al-Ashouti

It’s a gripping story, perfect for this grand hall, lined with tall glass-fronted cabinets packed with books and artefacts, a snapshot of the golden age of European explorers (or, if you like, “peak plunder”).

Two weeks ago Kelly became the first descendant invited by the museum to hold the object, the ABC reported. 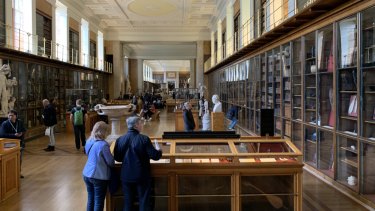 The Enlightenment Gallery at the British Museum, displays items obtained by explorers, including the “Gweagal Shield” . Credit:Nick Miller

It followed an unofficial “Stolen Goods” tour of the museum organised by performance activists “BP or not BP”, who told a few hundred about the disputed ownership of the objects it contains, including the infamous Parthenon Marbles. BP is one of the museum's sponsors.

Kelly told the crowd the shield was a “symbol of our resistance to colonisation” and demanded the museum starts to take his request for its return seriously, a request he first made in 2016.

A museum spokeswoman said Kelly’s subsequent private visit was “very positive, with suggestions for future collaborations to understand and interpret the shield and other objects more fully”.

“We are aware that some communities have expressed an interest in having objects on display closer to their originating community and we are always willing to see where we can collaborate to achieve this.” 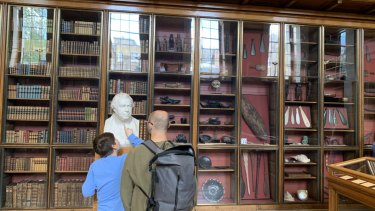 A boy examines a bust of Joseph Banks at the British Museum.Credit:Nick Miller

But the British Museum Act of 1963 forbids the museum from disposing permanently of its pre-1850 holdings except in rare circumstances.

In a recent case the museum had approved the return of art stolen from a Czech doctor by the Nazi Gestapo, but the British government used this law to block it, fearing a precedent that would mean the return of the Marbles.

Kelly also has a new problem: is this actually his ancestor’s shield?

“We can be pretty sure this is what it claims to be,” the guide tells her group.

The card in the display is rather more ambiguous, saying “when Cook landed at Botany Bay in 1770 two men came forward with spears. Cook fired shot hitting a man in the leg, the men retreated, dropping a shield. It has been suggested, but not confirmed, that this is that shield.”

But last year researcher Nicholas Thomas from the University of Cambridge Museum of Archaeology and Anthropology published a peer-reviewed paper that concluded “the shield exhibited [at the museum] is not the one taken from Gweagal in April 1770”.

He says the shield, pulled out of a collection of unlabelled objects in 1978, was identified as one brought back by Joseph Banks from the Gweagal encounter by just one drawing, made after Banks’ return to London in 1771. 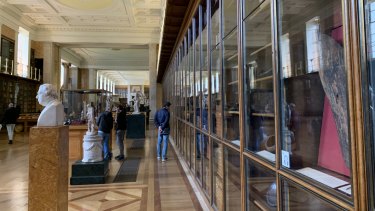 “Gweagal Shield”, right, is displayed at the British Museum.Credit:Nick Miller

Thomas argues that the artist was always meticulous and precise in his work – and his drawing has “significant and unambiguous discrepancies” from the shield now on display.

Furthermore, the shield in the museum appears to be red mangrove wood – not found as far south as Sydney.

Thomas says this is not an argument against the shield’s repatriation, nor should it undermine its symbolism to indigenous Australians.

Thomas speculates the original Gweagal shield may have passed from Banks to his servant James Roberts and was then lost, unless it turns up in some other museum collection.

But Kelly suspects it’s a stitch-up.

The examination of the shield by Thomas and others was arranged after Kelly first started pushing for its return.

He told a local newspaper the research was “like propaganda put there to cast doubt on the provenance of the shield, and to silence the campaign for repatriation”.

And he wants the artefacts to return to Australia, so they can be examined without prejudice.

His fight, he promises, will continue.