It’s hard to imagine the spring racing carnival not existing in Melbourne; this is an industry that attracts nearly $30 billion in gambling revenue after all.

But there is an argument that the Melbourne Cup’s status as a mainstream cultural event is rapidly diminishing, if crowd numbers and TV ratings are anything to go by. 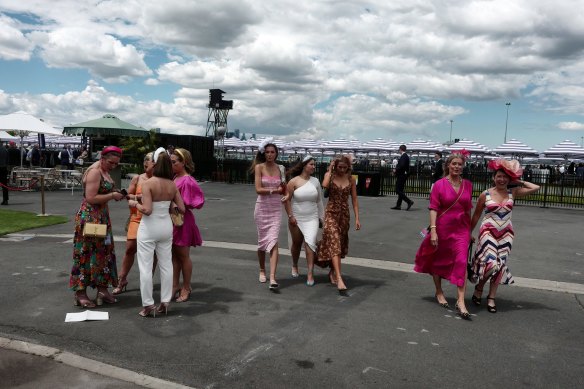 This year’s Melbourne Cup drew its lowest crowd in at least 40 years, outside of the COVID-affected races of 2020 and 2021, with 71,000 people attending Flemington on Tuesday.

It may not have helped that it was the coldest Cup Day since 1995 (just 13.3 degrees) and had come after a two-year hiatus due to the pandemic. But this was hardly a blip on the radar.

Crowd numbers across all Cup carnival days have been steadily dropping for the past 15 years, since the heights of 2006 when more than 400,000 walked through the gates of Flemington.

TV ratings have also nosedived over the past 10 years, halving from 2.17 million in 2013 to 1.02 million in 2022, according to TV Tonight. It should be noted that this period coincides with the rise in online streaming and doesn’t measure people watching in pubs and at parties.

Hard numbers aside, there is something more nebulous for racing to combat: the “ick” factor.

Typically reserved for romantic relationships that go sour, the ick is the feeling when something cool turns to cringe. For a sport trying to attract a younger generation, that’s a big issue.

Dr Lauren Rosewarne, associate professor in the school of social and political sciences at Melbourne University, said there were several challenges facing the racing industry as it tries to appeal to younger people.

Those included concerns over animal welfare, a backlash against fast fashion, worries about problem gambling, celebrities choosing not to attend, and the fear of being shamed in an online photo gallery of drunken racegoers on the Daily Mail.

There was also the recent controversy around the Flemington Racecourse flood wall possibly inundating nearby residents from the rising Maribyrnong River.

“That idea of something becoming cringe has a different way of spreading with social media,” she said.

“Something gets an ick about it and that ick goes viral.”

Rosewarne said audiences were fragmenting for all sorts of events that were once mainstream, including the Cup. People have far more entertainment choices at their fingertips now, she said. 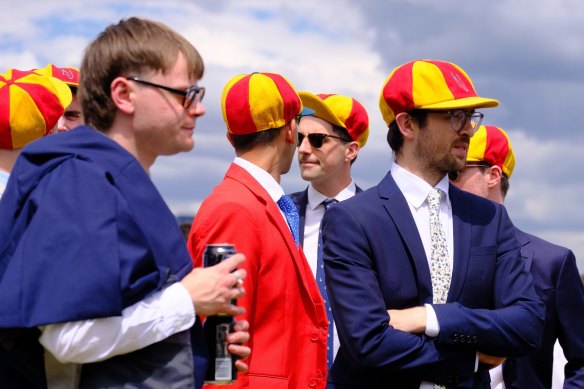 “We don’t really have event television anymore, it’s part of that same trend,” she said.

He also said the deaths of six horses that had run in the Melbourne Cup in the past 10 years was hard for people to ignore.

“You can’t run a carnival when you have a death, the carnival atmosphere just goes,” he said.

There were no fatalities this year, after the industry took steps to improve welfare. But activist campaigns like #nuptothecup have had an impact in raising awareness around the issue.

“Will the decline in the Cup be when major sponsors and the fashion industry start saying it’s on the nose?,” said Heenan. “My hunch is that horse racing is too big to fail.”

At the track, Kimi Tarei, 31, Mira McEune, 25, were both enjoying Stakes Day and said young people were still interested in coming to the races.

“I’m a bit of a hypocrite because I don’t like that side of it [the animal welfare issue] but on the flipside I love everything else about it,” said Tarei.

“I feel like a lot of people are still excited about it, especially the fashion aspect. The carnival is about more than the racing.”

However, the glamour of the big race is not what it once was. The Birdcage enclosure, known for its champagne-quaffing celebrities, had fewer marquees this year than the glory days, with brands like Emirates no longer taking part.

The remaining corporate tents set up along the straight still included the likes of Lexus, TAB, Crown and Furphy.

While all of that may signal doom and gloom for the glitzy side of racing, there is one element of racing that is not struggling. It’s the real reason it exists at all: gambling.

Mobile phone betting has been a huge driver of that increase, with more than $16 billion bet in 2020/21 through online corporate bookmakers based in the Northern Territory, such as Sportsbet, Ladbrokes and bet365.

Digital betting agencies have flooded online and traditional media with ads to lure new customers by outdoing each other with attractive-sounding promotions.

The most audacious was startup Betr offering 100-1 on each runner in the Cup, which almost cost the company $50 million.

“It’s because of the very clever marketing, where they have seamlessly made themselves a part of the sporting experience,” he said.

“They have targeted primarily young males, anywhere from their 20s to late 30s who have disposable income and love sport.”

Duncan said it was not surprising that many people at the track were choosing to use their phones, rather than bet with the bookies or even walk to the numerous TAB outlets.

Jack Craig and Jonathan D’Assisi, both 20, were both using their phones to look up odds and make bets at Flemington on Saturday.

“It’s convenient, it’s easy – I can just stand here and do it on my phone. You get all the stats on the phone, it’s right here,” said Craig.

“You get better odds back there [with the bookies] but I can use bet boost, and it’s the same.” 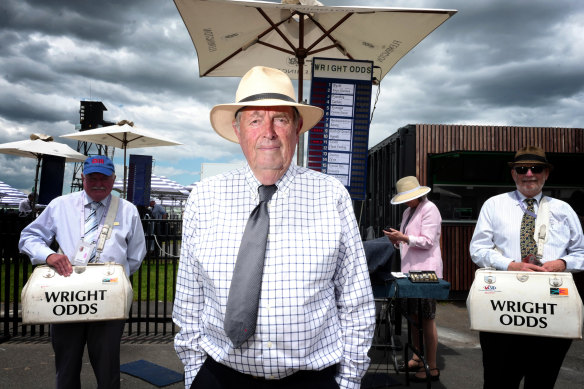 Bookmaker Roger Wright and colleagues at Stakes Day, the final meet of the spring racing carnival, at Flemington on Saturday. Credit:Luis Ascui

For traditional bookmaker Roger Wright, it’s changed the experience of being at the track. He remembered when punters would almost cause crowd crushes in the bookies enclosure as the next race neared.

Now, people will come up to him and quote the odds available on their phone to try and haggle for a better price.

“When COVID struck, people had nothing else to do in their loungeroom and they opened corporate accounts,” he said from the Birdcage area on Saturday.

“And most of them have stayed.”