The making of Britain’s greatest Olympians and ULTIMATE power couple: How cycling stars Laura and Jason Kenny balance training for 20 hours a week with looking after their son, had their cover blown by a kiss and were called a ‘nightmare’ by Prince Harry

Britain’s ultimate power couple Jason and Laura Kenny added to their record medal hauls this morning after they picked up a silver each in Tokyo.

Jason is now the most successful British male Olympian of all time, with Laura owning the most golds for women and just one behind the female total medal record with more events to come.

It is the latest chapter in the story of the couple, who captivated the nation with their romance and sporting success at London 2012.

Jason and Laura married at the 17th century Hilltop Country House in Cheshire in September 2016, surrounded by friends and family.

The couple share a son, Albie, who was born in 2017 and is looked after by his grandparents while the Olympic heroes are busy training 20 hours a week.

He regularly travels with his parents for events – but missed out on Tokyo amid the ongoing uncertainty over the Covid pandemic.

The couple’s romance first hit the headlines in 2012 when photos emerged of them kissing behind David Beckham at an Olympic volleyball match. 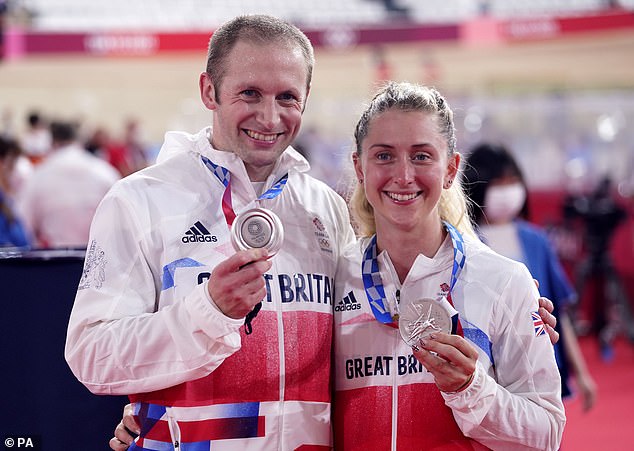 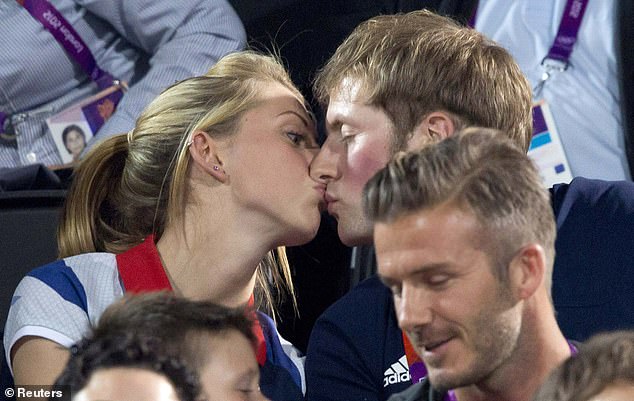 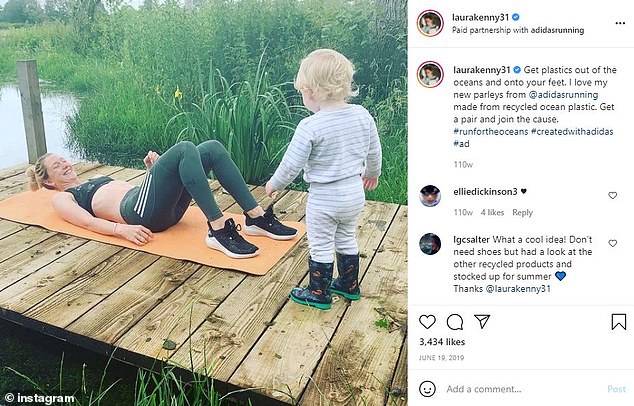 The couple share a son, Albie, who was born in 2017 and is looked after by his grandparents while the Olympic heroes are busy training 20 hours a week

The photos stunned the nation but only served to further endear the sporting heroes to the public.

Speaking about their experience in 2012, Laura told the Mail On Sunday: ‘After we won four gold medals between us at our home Olympics in 2012 we used our success to catch as much of the other action as we could.

‘While Jason was floating around the Olympic Village, he was asked if he wanted to go to the beach volleyball with Prince Harry, who was attending anyway and wanted to sit with some British gold medallists.

‘He just sat down and introduced himself. ‘Hello, I’m Harry.’ It probably wasn’t strictly necessary, but he was so normal that it seemed perfectly natural.

‘Jason asked me if I knew how the volleyball scoring worked. “Not a clue. Jason, I wonder if the old Prince will know.” The old Prince!

‘He heard me, too; of course he did. “You two are hilarious. And you’re a nightmare…”‘

It was shortly after Prince Harry left the match that David Beckham sat down, leading to the now infamous photos.

Jason said: ‘The next morning Laura woke up to a series of texts from her agent. “Laura, what the hell? Google yourself.” In all the newspapers were half-page photos of the two of us kissing like teenagers at a bus stop, David Beckham in the foreground.’

Laura also revealed in the interview that her future husband even served as something of an inspiration to her. 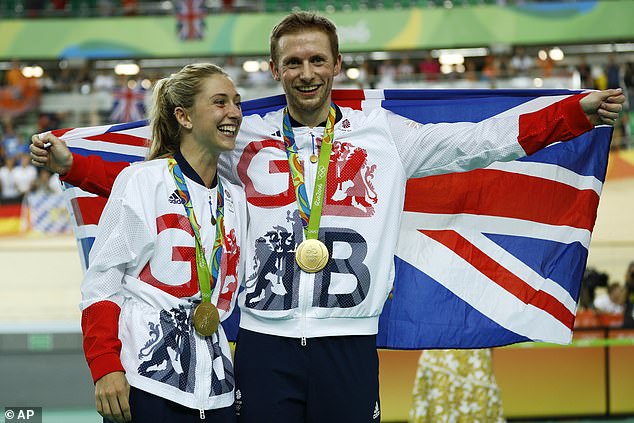 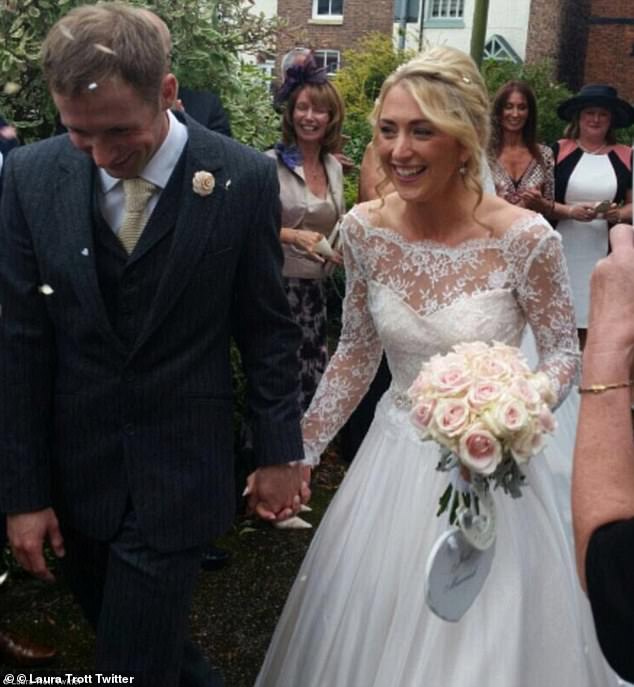 Jason and Laura married at the 17th century Hilltop Country House in Cheshire in September 2016, surrounded by friends and family 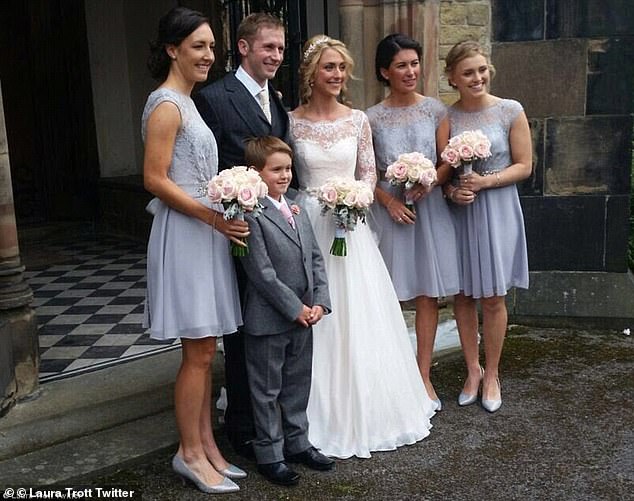 Speaking about the start of their relationship, she said: ‘It all began that Christmas after the Beijing Olympics, sitting at my parents’ house in Cheshunt, Hertfordshire, flicking through a copy of Dad’s Cycling Weekly. And there was Jason, 20 years old. I looked at his picture and thought: ‘That could be me come London 2012.’

‘I didn’t fancy him. He was nothing like my type, which, given I was 16, was all about boy bands – tall, skinny, big hair. Not massive legs, hair that his mum cut, and a hairy chest poking through his jersey.’

And the impression stuck, with Laura revealing how Jason had been ‘unsociable’ during their first meeting.

She said: ‘It wasn’t until 2010 that I got on to the senior squad, and it wasn’t until the following year that I actually met him. I shouldn’t have bothered.

‘From Jason, I got nothing. I just assumed he was unsociable, because it wasn’t only me he wouldn’t speak to. None of the girls I ended up hanging around with spoke to him either.’

However, their relationship thawed a year later, during the World Championships in Melbourne in spring 2012, when Laura broke his headphones.

The incident led to conversations between the two, with Jason saying it gave them ‘a reason to talk’.

Soon after, they were texting regularly, with Laura doing much of the chasing, before they decided to go out for dinner one night.

Their relationship eventually leaked out among teammates – though it stayed mostly hidden from the public until the infamous Beckham photo in 2012. 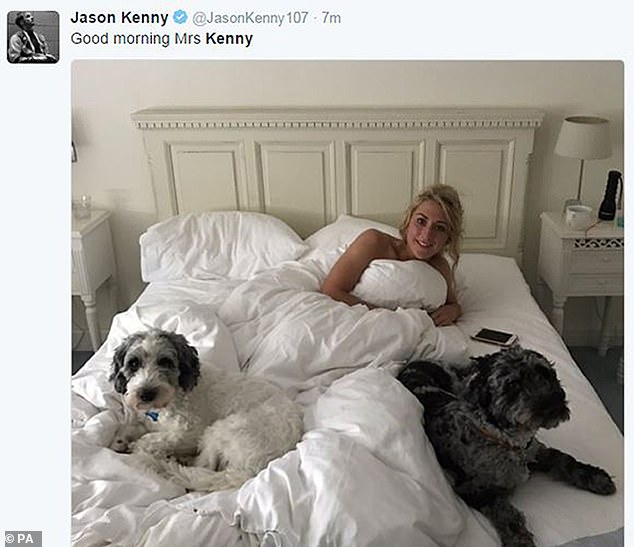 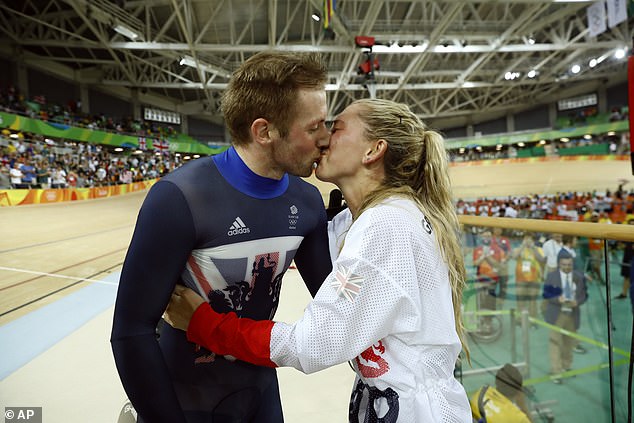 Jason is now the most successful British male Olympian of all time, with Laura just one behind the female record with more events to come

After the events of London, and the incredible success both enjoyed on the track, the couple realised that they wanted to get married.

In Jason’s typically understated style, he proposed to Laura during an episode of EastEnders. She immediately accepted.

They were engaged throughout the Rio Olympics, which proved tricky with a rule banning men and women from staying together – even though they were due to be married a month after the tournament.

The separation didn’t hinder them with Jason racking up three gold medals and Laura another two.

Afterwards, the couple married in front of friends and family in Cheshire – turning down a lucrative offer from an unnamed magazine would have paid for the event several times over.

They also asked their wedding guests to donate to Dementia UK instead of giving them gifts.

Their son Albie was born a year later.

Jason, who briefly retired before the Tokyo Olympics, became the most successful British male Olympian of all time after today’s contest.

He sits level with Sir Bradley Wiggins on eight medals in all, but has six golds compared to Wiggins’ five and two silvers to Wiggins’ one.

Jason also remains level with Sir Chris Hoy’s record of six gold medals, though backed up by one more silver. He has the chance to move out on his own with further success in the individual sprint or the keirin. 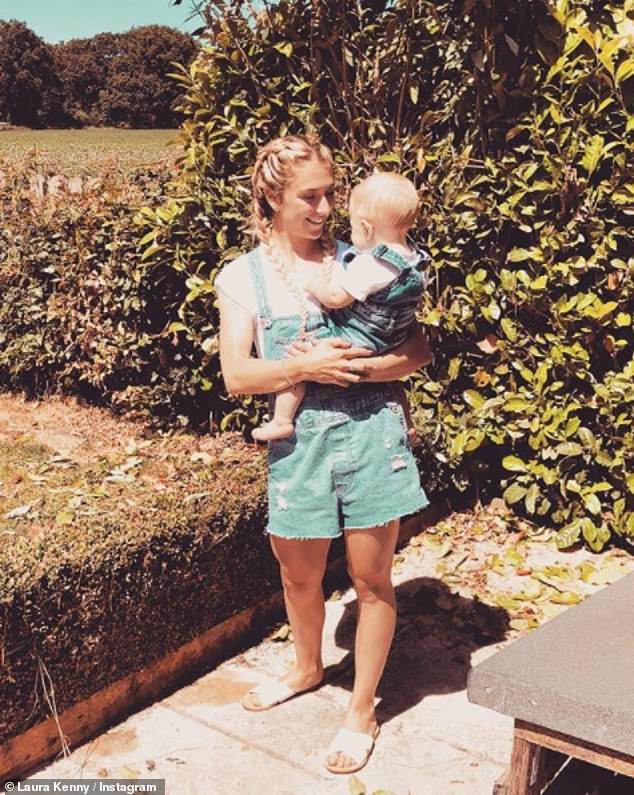 In April 2018, Laura talked about how she suffered ‘mum guilt’ about going back to work after giving birth to her son during an appearance on Lorraine 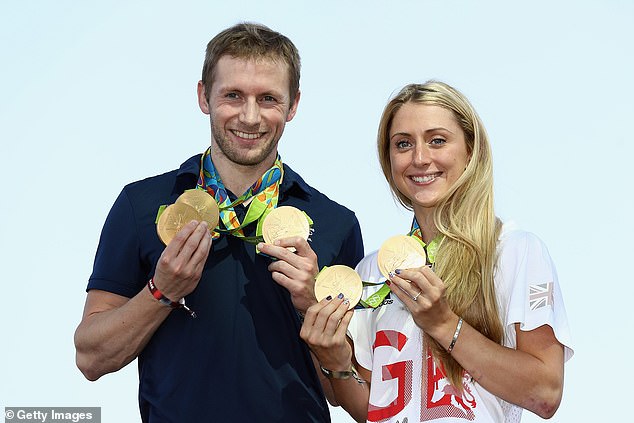 He managed a team sprint gold in Beijing 13 years ago and also an individual silver, before adding two further golds at London 2012 and three at Rio 2016.

Kenny reflected on reaching eight medals on Tuesday and told the BBC: ‘Every time you come back it just gets harder.

‘The team sprint was always our best chance of getting on the podium so I’m really happy with where we are.’

Laura, meanwhile, can eclipse Charlotte Dujardin as Britain’s most decorated female Olympian of all time at the Tokyo Games.

Her four golds are a record for a British woman and silver on Tuesday took her to five medals overall, one behind Dujardin whose equestrian medal count is three golds, one silver and two bronze.

Speaking about her inspirations, Laura previously revealed how her mother’s use of cycling to lose weight inspired her.

She endured several hardships as a child, after being born four weeks premature with a collapsed lung and later developing asthma.

Previously, Laura has also opened up about her shyness and struggles with her fellow pupils in school – issues she said disappeared as soon as she went to the velodrome.

In April 2018, Laura talked about how she suffered ‘mum guilt’ about going back to work after giving birth to her son during an appearance on Lorraine. 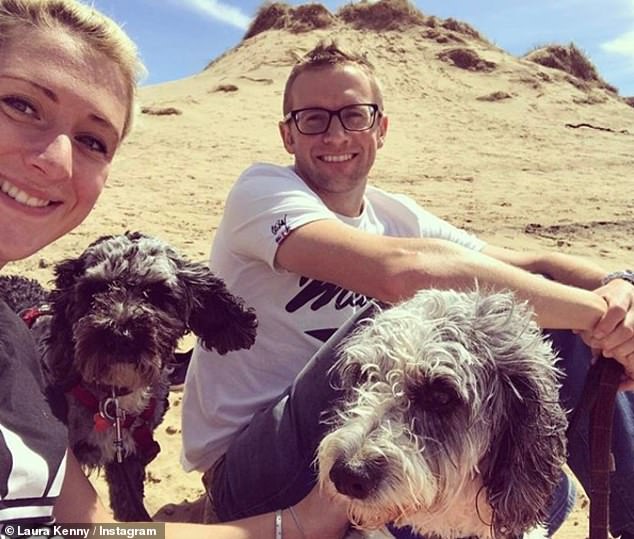 Jessica is married to fellow gold medal winner Jason, who she has said she makes a ‘great team’ with in juggling parenthood with being athletes

Six weeks after giving birth to Albert – who she calls Albie – she started training again and competed in her first event as a mother at the Track Cycling World Championships in March, for which she won a silver medal.

Speaking about her speedy return to work, Laura said: ‘I guess I didn’t realise how hard it was going to be leaving him behind, you do feel guilty. In any walk of life you’re going to feel guilty leaving them because as a mum, as a dad, you feel it’s your job to solely look after them.

‘It is difficult. We travel around the world, we’re away racing. There’s a lot of time you’re not with them.’

Laura credited fellow Olympian Jessica Ennis-Hill, who is mum to Reggie, four, and Olivia, one for helping her get through the guilt.

Laura continued: ‘Having Jessica Ennis-Hill there has been unbelievable because she’s done exactly what I want to do.’

Her husband Jason also pointed at his childhood love of cycling as driving his success, revealing how he used to chase his older brother around on a bike in the family garden as a child.

He then went to the Manchester Velodrome at 12 and fell in love with the sport, going back once a week to race after that.

A self-confessed petrolhead, Kenny has raced cars in the Radical Challenge Championship and his collection of motorbikes has included a KTM Duke 390 and a Kawasaki Z1000SX.

He ‘relaxed’ after Rio by combining his love of cycling and motor circuits in the Revolve 24 bike relay event at Brands Hatch.

After Rio, he decided to step away from cycling but, after a year out of the sport, he returned refreshed and ready for more.

While it would have been a surprise had he followed through with his retirement plans four years ago, it is expected that Kenny will quit after Tokyo.

However, he is refusing to rule out continuing to a fifth Games at Paris 2024, when he would be 36, the same age Hoy was when he won double gold at London 2012.

‘Leading up to Rio I was pretty much adamant I’d had enough and I was going to walk away’, he previously said. ‘And I did walk away. I didn’t do anything for a year.

‘This time, it’s probably more likely to be my last but I am not as adamant this time that it will be. I’m just kind of drifting along and going with the flow a little bit.’