The people smuggler arrested in his PANTS: Moment police raid London home of Lithuanian gang master who plotted to bring 69 Albanians into UK on a fishing boat

This is the bizarre moment the mastermind behind a people smuggling operation was arrested in his pants at home in London.

Arturas Jusas, 35, opened the door to National Crime Agency officers during the raid in Lambeth, in the south of the capital.

The Lithuanian gangster stood wearing a pair of boxers and what appeared to be an ankle tag while rubbing his eyes clear of sleep.

A clip of his arrested emerged after four others were found guilty of conspiring to smuggle 69 Albanian migrants into the UK on a converted fishing boat.

The 30m trawler, called the Svanic, was intercepted by Border Force in the North Sea late on November 17 last year and was escorted into Harwich in Essex.

The boat, built almost 60 years ago, had been heading towards Great Yarmouth in Norfolk after it set sail from the Ostend area of Belgium. 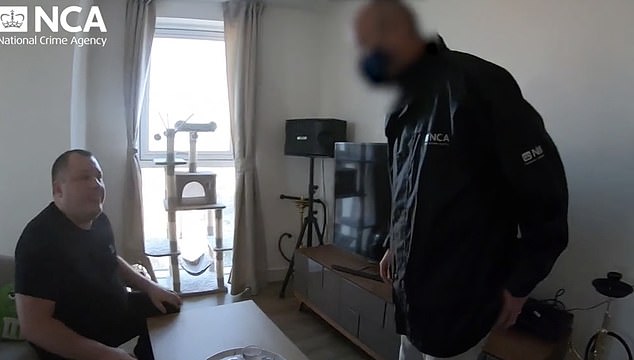 Arturas Jusas, 35, opened the door to National Crime Agency officers during the raid in Lambeth, in the south of the capital 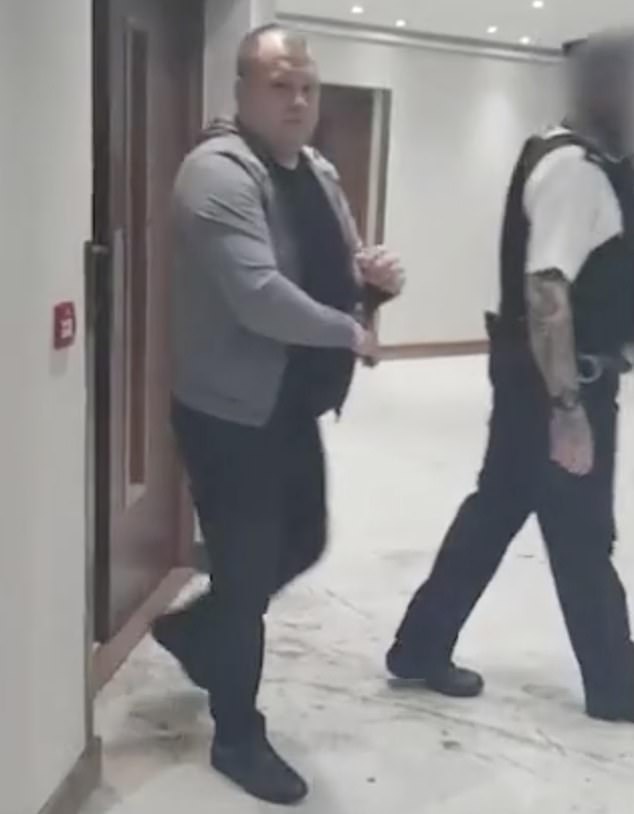 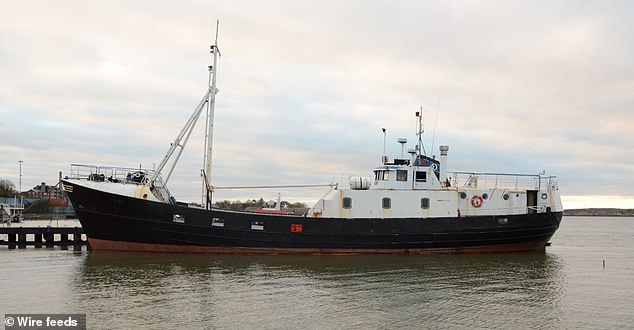 The near 30m-long trawler (pictured), called the Svanic, was intercepted by UK Border Force vessels in the North Sea late on November 17 last year and was escorted into Harwich in Essex

A HOME Office legal blunder allowed five migrants to become criminals in the UK even though they were arrested while trying to sneak in.

The migrants were among a group of 69 Albanians who were found hiding inside a converted fishing vessel that was intercepted off the coast of East Anglia last year.

But plans to prosecute them for illegal entry to the UK had to be abandoned because they had not yet set foot on British soil when arrested – a key criteria under the law.

After being released in Britain, five of the group were eventually re-arrested for alleged criminality, including working in a cannabis factory and low-level drug dealing.

It can now be revealed that the criminals who organised the illegal journey are part of a ‘prolific’ ring behind numerous people smuggling operations into the UK.

Footage showed NCA agents surprising Jusas at his home in London after he was contacting the four others involved.

A female officer yells ‘police can you open the door’ as she raps on the entrance to his flat.

The bleary-eyed criminal emerges with his stomach out and only covered by a pair of black pants during the raid.

A later clip showed him getting dressed as officers arrested him for ‘conspiring to facilitate illegal entry into the UK’.

Both men were described by prosecutors as crew members, who were arrested when the boat reached land in the early hours of November 18, 2020.

Ivgi and Kuliss were both found guilty by unanimous verdicts, a court official said. Prosecutors described them as ‘UK-based organisers’.

Jusas, also described as a ‘UK-based organiser’, admitted at an earlier hearing to conspiring to assist unlawful immigration.

A sixth man, Ukrainian national Volodymyr Mykhailov, 49, who the court heard was arrested when the boat reached land, was cleared.

All six defendants had been charged with conspiring to assist unlawful immigration between September 1 2020 and November 30 2020. 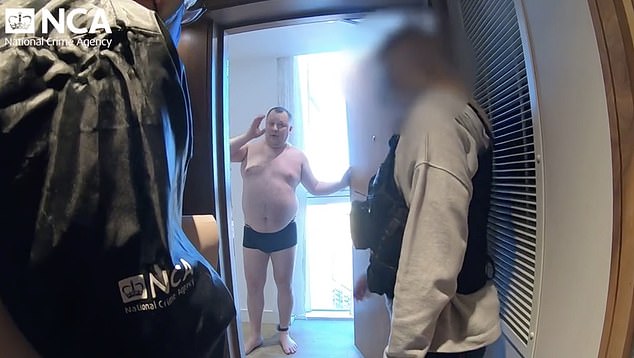 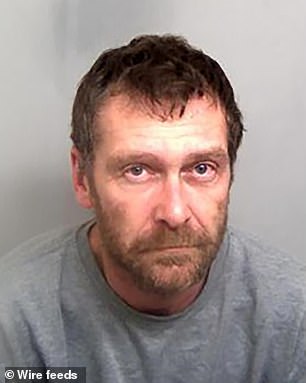 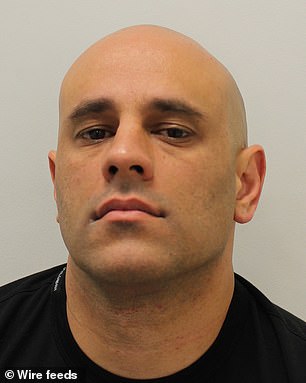 Tony Badenoch QC, prosecuting, told a trial at Chelmsford Crown Court that after it was seized the Svanic was inspected and it ‘displayed a multitude of faults’.

‘As an example, it only had a maximum lifesaving capacity of 20 persons,’ he said, saying there were 20 lifejackets for 72 people on board.

Earlier in the trial, jurors were played an audio file from a mobile phone from September 3, 2020. 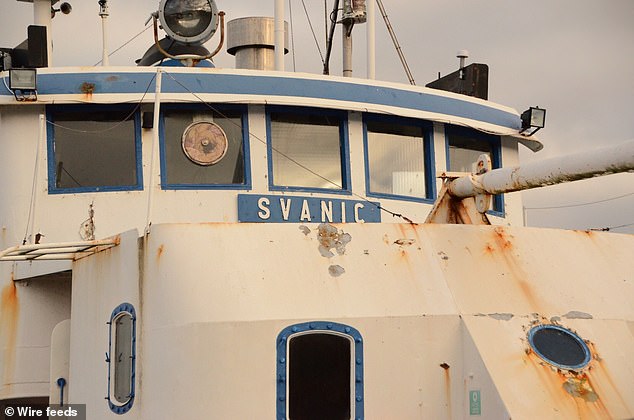 The boat, built almost 60 years ago, had been heading towards Great Yarmouth in Norfolk after it set sail from the Ostend area of Belgium 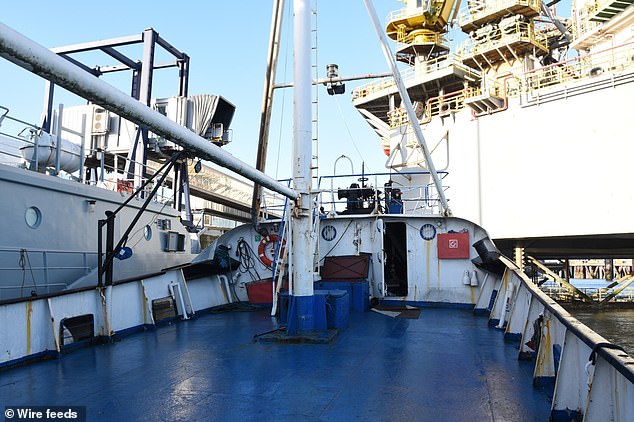 There was only one lifeboat despite there being dozens of people on board, the National Crime Agency found

Mr Badenoch said: ‘A single trip was therefore capable of returning 40,000 at the very least on the interpretation of that message.’

The National Crime Agency’s director of investigations, Nikki Holland said: ‘There is no stronger example of how organised criminals are prepared to risk the lives of the people they smuggle for profit.

‘The Svanic was in an appalling condition, and in no fit state to make the perilous journey from Belgium to the UK.

‘Had it got into trouble, the consequences could have been fatal as there was only one lifeboat and 20 lifejackets.

‘The dangers wouldn’t have crossed the minds of these men, whose sole motive was to line their pockets. They were planning to use this death trap over and over again.’

David Fairclough, Deputy Director, Immigration Enforcement Criminal Investigation, said: ‘These callous criminals had big plans to orchestrate a lucrative criminal operation at the expense of people’s safety using an unseaworthy vessel with only 20 lifejackets onboard.

‘It is sickening that criminal gangs like this have no regard for the value of human life only seeing them as a way to make money.

‘Thanks to the culmination of efforts across the Home Office and NCA, we’ve slammed the breaks on this ruthless crime gang, and they will now receive the justice they deserve.’

The five men who were convicted of the charge are to be sentenced on a date to be fixed.