Christian Porter is taking a major gamble in launching defamation proceedings against the national broadcaster, and this fight will be ugly.

In many ways, however, this is the most in control the Attorney-General has been in weeks – and he is seeking, very strategically, to back the ABC into a corner. 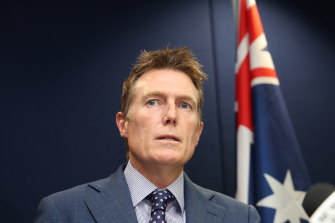 Porter’s lawsuit against the ABC and Four Corners reporter Louise Milligan alleges the February 26 online article that revealed a historical rape allegation against a then-unnamed cabinet minister defamed him by portraying him as the perpetrator of a “brutal rape” of a 16-year-old girl in 1988, when he was 17.

A threshold question for the Federal Court, where the lawsuit has been filed, will be whether the article identified him, even though he wasn’t named.

There are a number of bases on which the court might conclude Porter was identified, including that a relatively small class of men, namely senior cabinet ministers, could have been the man at the centre of the allegations.

His name was also trending on Twitter in the days before he outed himself on March 3 as the minister at the heart of the story.

If he is identified by the article, a central issue will be whether the article conveys the very grave meanings that his lawyers claim are contained in the article.

Here, Porter has the upper hand – at least for now. In every defamation case, lawyers for the plaintiff are required to craft the defamatory meanings, known as “imputations”, that are said to arise from a publication. This marks the battleground for the case.

It is in the interest of plaintiffs for these meanings to be pitched at the highest possible level of seriousness, which maximises potential damages and may make it harder for a defendant to mount a successful defence.

The judge presiding over the case will have to decide which meanings were in fact conveyed.

In this case, it is very likely the ABC will argue that these high-level meanings – that Porter is guilty of a “brutal rape”, or there were “reasonable grounds” for suspecting him of the crime – were not conveyed.

It may argue its article suggested only that there were reasonable grounds for an investigation.

The sticking point for the ABC is that it must engage with and defend the meanings pleaded by Porter’s lawyers, not what they believe the article said and intended to say.

It is common for judges to leave their decision about whether the defamatory meanings alleged by a plaintiff are in fact conveyed until the end of the trial, although some meanings may be struck out earlier.

For the ABC, that means its defence is likely to be multi-pronged to cover all eventualities. In theory, it could include a truth defence to serious claims it does not believe it conveyed, effectively turning the case into a rape trial inside a defamation case, although this would be extraordinarily risky.

Porter’s lawyers know this, and in a statement his solicitor Rebekah Giles dares them to do it: “If the ABC and Ms Milligan wish to argue the truth of these allegations, they can do so in these proceedings.”

While a lower standard of proof applies in defamation cases, meaning an allegation would only need to be proven on the balance of probabilities rather than the criminal standard of beyond reasonable doubt, this is still a heavy burden.

Porter has strenuously denied the allegations and the woman at the centre of the claim took her own life last year after deciding not to pursue a police complaint.

As Milligan said in a Four Corners broadcast on March 8, the allegations “can now never be tested in a criminal proceeding” and “there is no way of knowing whether or not a rape occurred”.

The ABC likely did not want to say Porter had committed a crime, or was reasonably suspected of one, and ultimately a court may say it didn’t. But Porter has issued a challenge: could it prove that he did? Could anyone?

The truth is no media outlet would want to, and the case is going to be costly and messy for all involved – including him.