‘This is one of the most difficult airlifts in history’: Biden says his ‘focus’ is to evacuate all US citizens from Afghanistan, insists allies have NOT questioned America’s credibility and finally takes questions (from a pre-approved list)

President Joe Biden vowed Friday to ‘mobilize every resource’ to get Americans and Afghan allies out of Afghanistan – and took questions, from a pre-approved list of White House reporters, about the conflict for the first time in nine days.

‘This is one of the largest difficult airlifts in history and the only country in the world capable of projecting this much power on the far side of the world with this degree of precision is the United States of America,’ Biden said.

He insisted that the chaotic takeover of Afghanistan by the Taliban, leading to disarray at Kabul’s airport as westerners and Afghans flee did not taint the U.S.’s global reputation.

‘I have seen no question of our credibility of our allies from around the world,’ he said.

‘There will be plenty of time to criticize and second guess when this operation is over, but now, now I’m focused on getting this job done,’ Biden added. 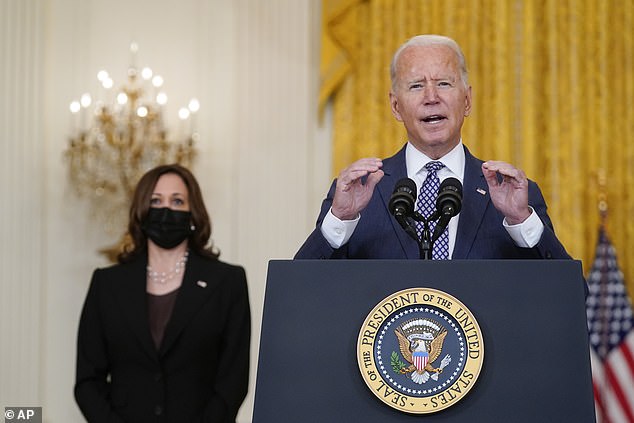 While dismissing a question about Afghans falling from aircraft posed Wednesday by ABC News’ George Stephanopoulos – the one sit-down he did with press all week – during his remarks Friday Biden finally addressed the visuals.

I don’t think anyone, anyone of us can see these pictures and not see that pain on a human level,’ he added.

Earlier Friday the White House said Biden ‘never shies’ away from taking questions – nine days after he last faced reporters and amid criticism over him dodging the media during the Afghanistan chaos.

And in the latest sign of how the turmoil in Afghanistan has rattled the plans of Biden’s strategy team, the White House announced Friday the president would not be traveling home to Wilmington as scheduled that night.

The statement about Biden’s willingness to face the press came as the White House communications team has kept Biden away from the reporters who follow him – and the president has avoided his typical proclivity to engage with them on issues of the day, even amid the unfolding international crisis.

Biden spoke from the White House on Wednesday about the coronavirus amid the evolving situation in Afghanistan, as his administration struggles to fire up a massive evacuation to get thousands of Americans, Afghans, and allied personnel out of the country after the fall of Kabul.

But he ignored a chorus of shouted questions about the situation there.

Bedingfield was referencing to Wednesday’s sit-down Biden did with ABC’s George Stephanopoulos, where he said there was always going to be ‘chaos’ when the U.S. departed after the 20-year war.

Shortly before Biden was set to speak at the White House, CNN reported that the U.S. had paused flights out of Afghanistan, amid a crush of people at the airport in Kabul.

Biden did speak to the country about Afghanistan Monday, but again took no questions from the White House press.

The last time he took questions was at a press conference on August 10th after Senate passage of infrastructure legislation and a budget resolution. 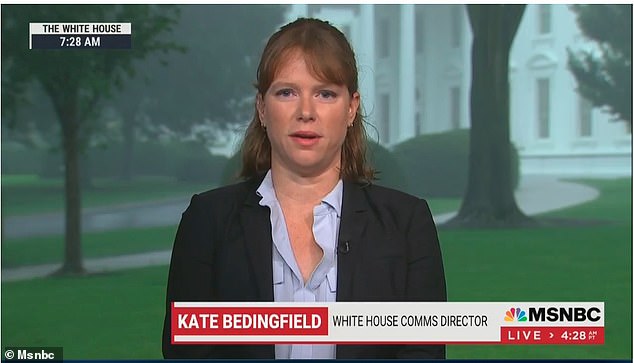 WH Comms Director Kate Bedingfield took questions about the situation in Afghanistan in a TV interview Friday. ‘The president never shies away from taking questions,’ she said 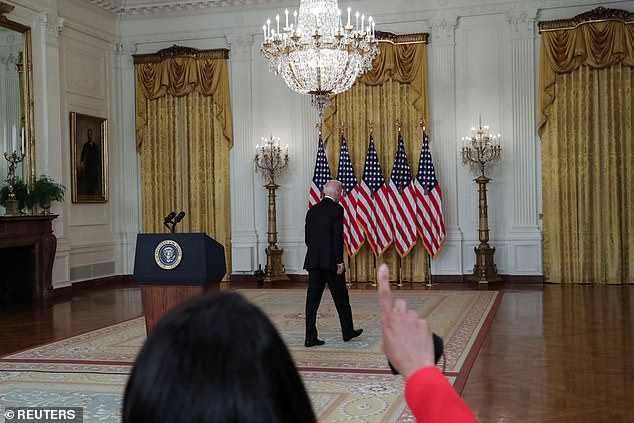 Biden avoided questions after a Wednesday speech on the coronavirus

Back on July 2nd, before the Taliban takeover of the country, a Biden quip signaled the sensitivity of the topic he was trying to avoid. ‘I want to talk about happy things man,’ he said when asked about Afghanistan.

Bedingfield, who gave an interview amid a downpour from the White House lawn Friday, was asked about Biden’s July 8th comments when he said a Taliban takeover was not an inevitability.

‘He was talking about whether this was a possibility and not an inevitability. And that’s an important distinction. Look, obviously as we’ve seen in all the reporting the last week, the president saw a wide array of intelligence,’ she responded.

‘But you heard from [Joint Chiefs Chairman] General Milley, you heard from Director [of National Intelligence] Haynes; they saw no intelligence that suggested that Kabul would fall within 11 days. That was not a scenario that was put in front of the president,’ she said.

‘So he saw a wide array of intelligence. But ultimately at the end of the day, he’s the commander in chief and the buck stops with him. He made the decision.

She also spoke to the state of play of evacuations: she said 9,000 people have been taken out since the Taliban takeover, with 14,000 since July.

‘We have taken control of the airport. Flights are leaving regularly. And I would say, that’s not something that happens without planning, that’s not something that just happened. The president planned for multiple contingencies,’ she said. ‘And that’s why he prepositioned troops in the Gulf able to move in immediately, taking control of the airport and setting up flights to get people out of the country. It’s the mission that he is laser focused on, getting every American who wants to leave Afghanistan out of Afghanistan, and moving people out as quickly as possible.’

Interviewer Willie Geist asked if the chaos on the ground pointed to why the U.S. should have evacuated people before pulling out most U.S. troops.

‘So our effort was to continue to try to ensure that the Afghan government had the opportunity to remain in place.’

Asked why Biden wasn’t loudly condemning the Taliban – who the military has been communicating with through channels and who have been allowing the evacuation to continue, despite a crackdown on dissent – she responded: ‘Of course he does not condone that kind of behavior. The most important thing in this moment right now is to get people out of the country who want to get out of the country.’

But she called human rights abuses ‘appalling’ and ‘horrifying.’