Mountain chains and the turbulent airflow around them help create some magical and otherworldly scenes.

On Thursday, during a beautiful and otherwise sunny jaunt, hikers in the Argentine Andes caught a prime example of a stacked lenticular cloud. Appearing to rotate in place like a saucer-shaped top hat, it’s easy to imagine why these phenomena have led to UFO reports in the past.

Minh Phan, a government meteorologist, tweeted: “I literally lost my … mind” upon first sight. He was fortunately able to capture a mesmerising time lapse of the lenticular’s silent pirouette over a mountaintop near the Argentina/Chile border.

As air in the mid-latitude flow rushes across a mountain chain – in this case the Andes – eddies form, like horizontal rotors stretched along the peaks, and eventually can become large-scale standing waves.

“Lenticular clouds are pretty common in this part of the world, especially with the mountain climate,” Phan wrote in a text message to The Post. “There were many other pockets of lenticular clouds on that hike alone, but this one stood out because they were so stacked.” 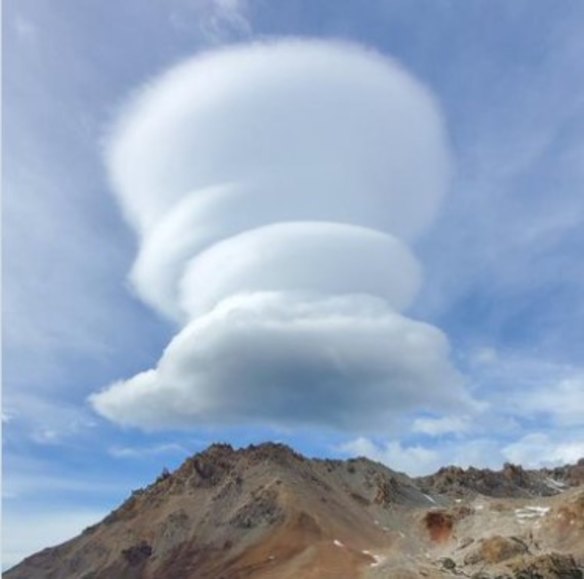 Lenticular clouds over the Andes.Credit:@WXMinh

These standing waves are often present in mountain environments. They are a primary cause of clear-air turbulence and airline pilots will often try to avoid them.

Lenticular clouds become visible when there is increasing moisture aloft.

Rather than being truly stationary, the lenticular cloud is continually redeveloping near the crest of the standing wave. The stacked appearance of some lenticular clouds is believed to form due to small variations in moisture concentration at different altitudes.

Contrails from planes are highlighted in much the same way as lenticulars.

Seeing either the natural or man-made clouds are a sure sign of rising moisture levels overhead and perhaps unsettled weather to come.