It’s a Saturday morning in a hall at the Uniting Church’s Prahran Mission, and people are head banging to a thrash metal song by US band Anthrax.

Flanked by a portrait of a minister, slogans about faith and love and prints of people holding hands, they also belt out songs by Metallica, Iron Maiden and Ozzy Osbourne. 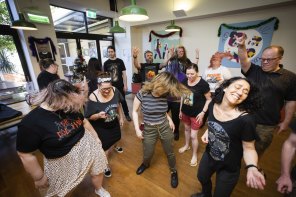 A good time all round: Members of the Heavy Choir Project take a break from singing to dance to Anthrax. Credit:Paul Jeffers

There’s a reverent pause each time an axe solo comes up on the backing track.

Welcome to the Heavy Choir Project – a heavy metal choir that probably won’t sing All Things Bright and Beautiful.

It’s where wearing your 30-year-old Motorhead T-shirt and ancient jeans are practically pre-requisites, as is knowing the words to Iron Maiden’s The Number of the Beast.

Founder Emily Stekly, a fan of melodic death metal and mother to a toddler, was looking for a new social outlet, and always loved the camaraderie of metalheads. 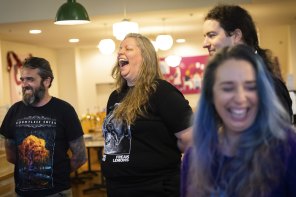 For those about to rock: Heavy Choir Project members share a laugh.Credit:Paul Jeffers

She threw the choir idea out on Facebook earlier this year and found some kindred spirits.

The choir is currently limited to 18 people at rehearsal, but the waiting list is at 85 and there is an expectation of expansion next year. The group is called the Heavy Choir Project, omitting the word Metal, so the singers can explore areas such as hard rock and grunge.

On March 24, it will give its first concert, at Memo Music Hall in St Kilda. Tickets will go up on the choir’s website and Facebook page later this week.

Ms Stekly said metal songs could have beautiful vocal parts and range in theme from dragon slaying to someone nearing death reflecting on his life, as in Iron Maiden’s fast-paced Hallowed Be Thy Name.

“There’s a lot of human emotion that you relate to, so that’s why a lot of us find it cathartic, listening to and singing metal,” she said.

Singer Ben Chamberlin, 19, of Mount Evelyn, whose parents brought him up on heavy metal, said he liked the social side of the group and “the amount of passion the people in the choir have”. He said the choir “sounded like a good, fun time, and it has been”.

Ann Poore, 61, of Bundoora, a retired psychiatric nurse who was introduced to heavy metal by war veteran patients, said she loved the choir’s harmonies, and the lyrics of songs such as I Want Out by Helloween, which is about living your own life.

Leah Dent, 40, who drives to rehearsals in Prahran from Officer, 50 kilometres away in Melbourne’s outer south-east, said the choir was the perfect social outlet for her as a full-time worker and the mother to two small sons.

“Every Saturday I get to come to this amazing, diverse group of people and literally let my hair down,” she said.

Her favourite song with the choir is Mr Crowley by Ozzy Osbourne, about occultist Aleister Crowley.

“It’s haunting, it’s tongue in cheek, the harmonies are amazing,” Ms Dent said. “You can get goose bumps standing there listening to everyone.”