Three men have been jailed for coughing, spitting or threatening to infect people – including police officers – with coronavirus.

West Midlands Police released shocking audio and video footage of officers being threatened during arrests, and said they were issuing it as a ‘stark warning’ to those using coronavirus ‘as a weapon’.

On Monday, a teenager was jailed for six months after threatening to spit in a female officer’s face as she detained him over an alleged road rage incident in Coventry, police said. 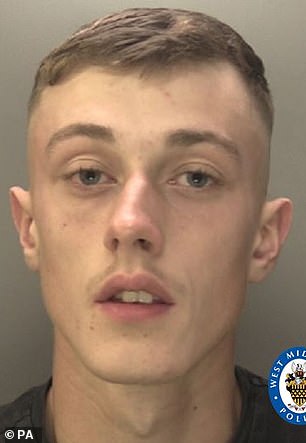 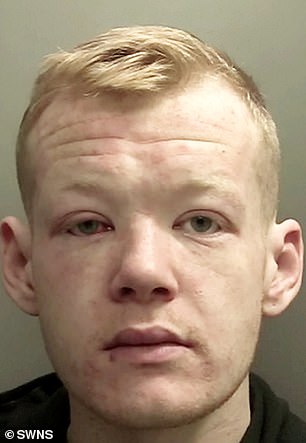 Thomas Wilson, 19, left, and Bevan Burke, 22, were both jailed after threatening to spread coronavirus following their arrests

Officers arrested Thomas Wilson, 19, at 12.30pm on March 31 in London Road after it is claimed he spat at a lorry driver and brandished an axe during an altercation in Brinklow Road.

He resisted arrest and suggested he had Covid-19 symptoms before threatening to cough and spit at the officer.

Wilson, from Hepworth Road, Binley, was charged with possessing an offensive weapon, a public order offence, assault by spitting at the lorry driver, and assaulting an emergency services worker.

Most charges were deferred to be dealt with at a later date but Judge Andrew Lockhart jailed Wilson after he admitted the spit threat.

On the same day another man, Bevan Burke, was jailed after he spat at a shopkeeper who had banned him from the store for shoplifting.

Police said Burke stormed into Allen’s Croft Post Office in Northfield, Birmingham, on April 3 and spat at the victim, shouting: ‘I have corona … you’re going to die.’

The 22-year-old was arrested later that day, and while being transported to police custody began coughing and blowing towards officers and again said: ‘I’ve got confirmed coronavirus and now you’ve got it. I hope you and your family die.’ 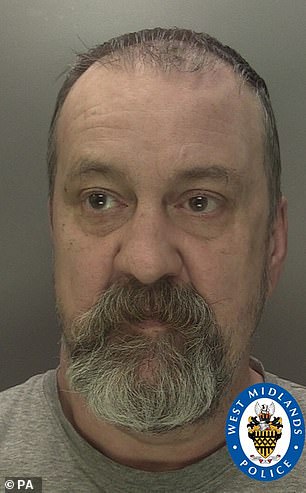 Anthony Evans, pictured, of no-fixed-abode, spat at a police officer during his arrest on April 4 in Birmingham

He was jailed for 42 weeks at Birmingham Crown Court having admitted assaulting emergency workers and the shopkeeper, as well as shoplifting at the convenience store on January 10.

Meanwhile, a 54-year-old man was also given a prison sentence on Monday for spitting in the face of a West Midlands Police officer in Birmingham city centre.

Officers attended a petrol station in Corporation Street at 9.45pm on April 4 following reports of a drunk man causing problems, pouring fuel on the floor and obstructing traffic.

Anthony Evans, of no fixed address but originally from Atherstone in Warwickshire, tried kicking out at them and, as they detained him, spat in an officer’s face.

He was jailed for 16 weeks at Birmingham Crown Court, police said.

He said: ‘It’s completely unacceptable for people to behave in this way against officers, other emergency services staff, key workers or indeed any member of the public.

‘At a time of heightened concern across the whole country, a minority of people are using the threat of coronavirus as a weapon.

‘It won’t be tolerated and offenders have now been sent a clear warning: there is the very real risk you will be sent to prison.’