The statement by the director of the US National Institute of Allergy and Infectious Diseases demonstrated his tacit backing for countries already seeking to give booster vaccinations to over-50s. 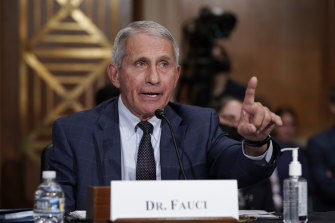 It came as the US Food and Drug Administration’s advisory panel rejected a plan to offer Pfizer booster shots to Americans aged over 16.

They later approved offering a third dose of Pfizer’s vaccine to everyone aged 65 and above, but surprised many by rejecting an initial proposal by the drug company, backed by President Joe Biden’s administration, to offer them to everyone aged 16 and over.

Dr Fauci said: “I believe… it’s going to turn out that the proper regimen, at least for an mRNA vaccine [such as Pfizer’s], is the two original doses, the prime, followed in three to four weeks by a boost, followed several months later by a third shot.”

He added: “I’m favourably disposed to boosts based on the waning of immunity, as we’re seeing very, very clearly… in the data in the US [and] even more dramatic data from our Israeli colleagues.

“[There is] some indication of waning in the UK, which is the reason the UK has or will soon be vaccinating people 50 years of age and older, as well as healthcare providers and those who are immuno-compromised.”

Dr Fauci said it was not yet clear if children would need a third shot: “it’s too early to make that determination.”

As Australia’s Therapeutic Goods Administration (TGA) has provisionally approved the use of Pfizer and Moderna vaccines for people aged 12 years and older, Dr Fauci also said he believed children as young as five in the US would be vaccinated by late autumn.

He said the vaccination of children aged between six months and five years would happen “likely some time after”, acknowledging that that giving COVID-19 vaccine to children “at that younger age is not uniformly agreed upon around the world”. But, he added: “We are… doing the clinical studies right now to extend the vaccination.

“The data we are collecting on the children in the clinical trial, [aged] from 11 to five, will likely be available for evaluation by our regulatory authorities by mid-fall. I would say some time around October, November,” he said.

“So, it looks like we will be vaccinating children, before the end of the year, down to five years old, if our regulatory authorities give us the go ahead.”

Dr Fauci said concerns about health impacts on children were “the reasons we do clinical trials”.

The main concern with the COVID-19 vaccine has been myocarditis. But he said that was generally seen in children aged over 12 and into young adulthood.

“Although we don’t expect in the younger children that we’re going to see it, we’re still going to do the studies for safety, he said.

“If we can establish the safety element of it and the risk-benefit ratio weighs heavily on the benefit, I certainly would be in favour of it.