Tiger Woods teed off Thursday at the 150th Open Championship at St. Andrews in search of his fourth British Open title. And it wasn’t his best showing.

Woods finished the first round with a 6-over-par 72, carding three birdies, five bogeys, two double-bogeys and many missed opportunities while playing alongside Max Homa and Matt Fitzpatrick. Woods is 14 strokes off the lead and tied for 146th place.

Now, his focus turns to rebounding on Day 2 to make the weekend cut.

The 46-year old 15-time major champion has gone through extensive surgeries on his lower body, including after his right leg was injured in a single-car crash in February 2021.

He made a triumphant return after a lengthy layoff to the Masters earlier this year, where he finished 13 over par.

Woods withdrew from the PGA Championship at Southern Hills Country Club in Tulsa, Oklahoma, after posting a career-worst round at the event with a 9-over 79.

Woods made the cut at the tournament but cited injuries as a reason for his withdrawal. 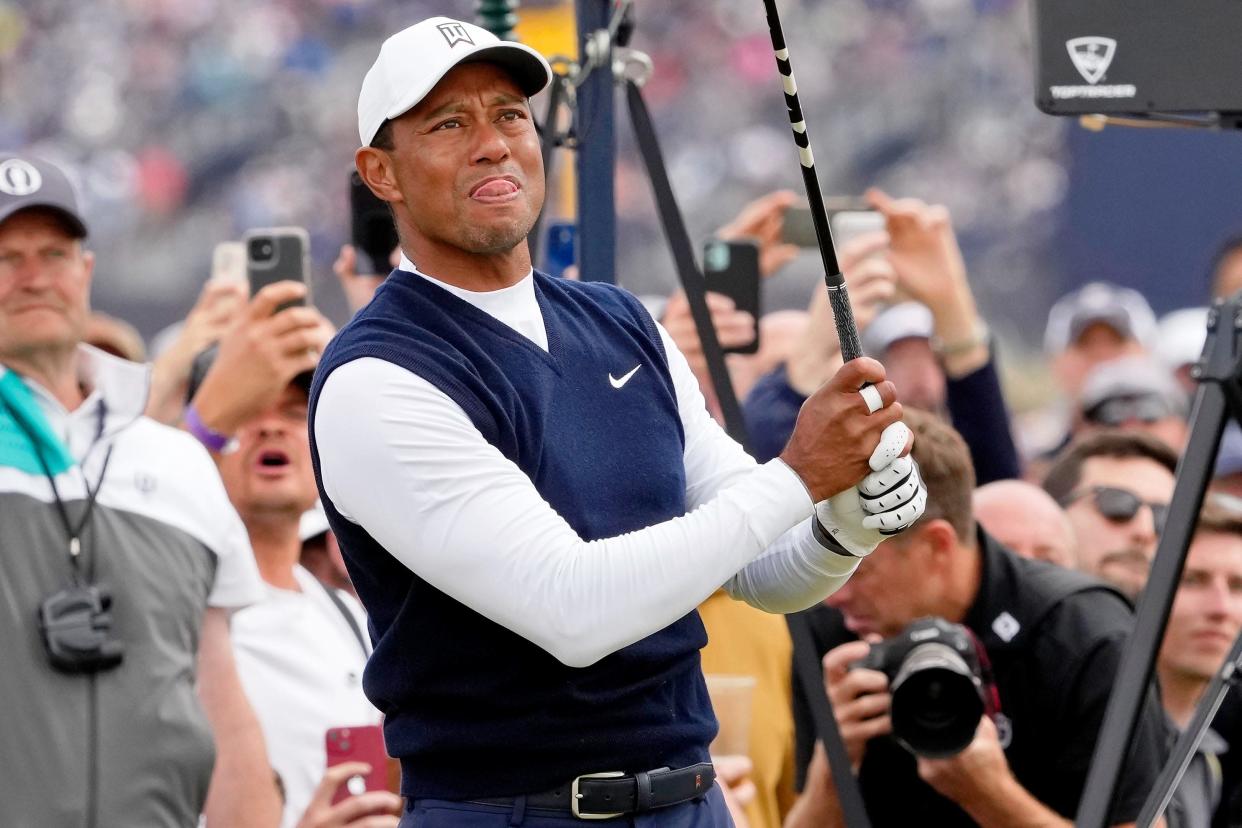 STAY UP TO DATE: Subscribe now to our Sports newsletter

MORE TIGER: Analysis of Tiger Woods’ first round at The Open

Here is a hole-by-hole analysis of how Woods fared during Round 1 of the British Open.

Tiger hits the tee shot and it lands on the left side of the fairway. He then hit the next shot in a divot and goes on to have a double bogey on the par 4.

Again, Tiger has a decent tee shot followed by shots that left him with a lengthy chance at a birdie attempt. He saved the hole for par.

Tiger hit the fairway to the left off the tee. His putting continues to be an issue as he pushed his birdie shot 5 feet past the hole. He settles for a bogey.

Tiger starts off with the driver on the par 4. The ball hits the rough and then makes its way back onto the fairway. Although 10 feet from the hole, he leaves it short and settles for another bogey. His playing partners each finish the hole at 1-over.

With a manageable par 5, Tiger hits the fairway. His birdie putt was close to the pin but doesn’t make it. A chance to cut down on the leaders was lost and he settles for a par.

Tiger hit the fairway once again. With a wedge, he makes it to the edge of the green with a long putt for par. He makes it and saves the hole. No one in playing group has made a birdie so far this round, and each are looking way up at the leaderboard.

Tiger’s hole at 7 started with fans yelling, and he promptly went into the bunker on the right side. He punched out of the bunker and found the fairway but again went off and to the right leaving a chip shot from about 7 feet for bogey. He missed and is in deep trouble now.

At the 200-yard par 3 eighth, Tiger’s tee shot gives him a decent chance at a birdie. He misses it short, but taps in for par from 2 feet.

Tiger hits a good drive starting the par 4 ninth hole, landing just a few feet from the green. Broadcasters note this is the second-easiest hole on the first day so far. His second shot is right on the money, leaving an excellent shot for birdie less than 10 feet from the hole. First birdie of the round in the group comes from Homa, and Tiger follows with one. He leaves with a big smile on his face.

Tiger starts off his back nine by hitting the fairway at 10, and his second shot is just as true, leaving him a few feet from the cup for another excellent birdie attempt. And it is back-to-bird birdies for Woods.

Another par 3, Tiger hit the tee shot on point and leaves it about 40 feet from the cup. But any momentum he had quickly went away as he settles for another bogey.

Tiger drives the tee shot and lands into some thick grass, still with a good shot to have a positive outcome on this par 4. He does a good job with his second shot and lands within reasonable distance from the hole. Tiger’s short game is way off as he misses the birdie shot and settles for par.

Tiger hit his signature low-flying stinger with a driving iron and gave this one a good run down the fairway, though his ball eventually rolled into the rough. Well this won’t be fun: Tiger has a blind shot to the green from an uphill lie in the rough, with wind and a hard-breaking green. What could go wrong? He threw this one high into the air and landed it in the middle of the green and the ball just kept going from there. That’ll leave a good 100-plus feet for birdie. Stop me if you’ve heard this one before, but he left it way short. Just doesn’t quite have the pace for these lengthy putts. Missed the par save and he makes his second bogey in three holes.

Tiger bounced back nicely with a 413-yard tee shot that rolled to the end of the fairway, marking his longest tee shot of the day. The shot showed that power is not an issue for him, finishing is. With 188 yards left to the hole, Tiger chipped it onto the edge of the green for a difficult two-putt. But he made it look easy on No. 14, sinking a nice putt to finish with a birdie, his third of the day.

Tiger set himself up nicely on the par-4 with a tee shot down the fairway. Another crisp club stroke landed him in the middle of the green with another birdie opportunity in sights. But he barley overshot his putt and ended up with a par.

Tiger grabs iron here to lay back a bit and instead loses this shot to the rough. Tough one. I stand corrected! Tiger intentionally played this one down the third fairway to get a good angle of attack and just missed that line. He couldn’t control this one enough from the rough and missed the green long, which will leave a testy pitch-and-putt for par. He grabs the long iron again and putts this one up onto the green around 8-10 feet away but fails to get it in on par.

Tiger hit a decent shot down the fairway but his ball rolled into the rough to the left. He aimed right with a club on his next shot and managed to find the green. He had a chance for birdie, but sunk a putt for par.

Tiger drove the ball up the fairway and almost snuck up on to the green before it rolled back down. He didn’t put enough speed behind a putt for eagle, put too much power behind a shot for birdie. He finished with a par nd gave the crowd a cap tilt.