Top restaurants have started sending emails to customers asking them to book ‘business lunches’ after Downing Street admitted to a lockdown loophole.

Corbin & King, which owns restaurants including The Wolseley, Brasserie Zedel and The Delaunay, sent an email confirming that working lunches were ‘within the rules’ even though being in Tier 2 means that people from different households can’t mix indoors.

The Wolseley tweeted to say: ‘We are all finding the Tier Two rules bewildering and whilst social occasions need to be from a single household, BUSINESS MEETINGS ARE ACCEPTABLE within the rules.

‘So, we wanted to let you know, we are proceeding with business bookings from different households.’ 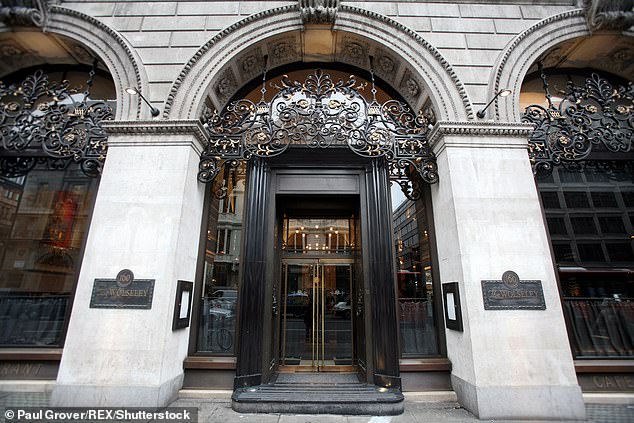 Corbin & King, which owns restaurants including The Wolseley (pictured), Brasserie Zedel and The Delaunay, sent an email confirming that working lunches were ‘within the rules’ even though being in Tier 2 means that people from different households can’t mix indoors 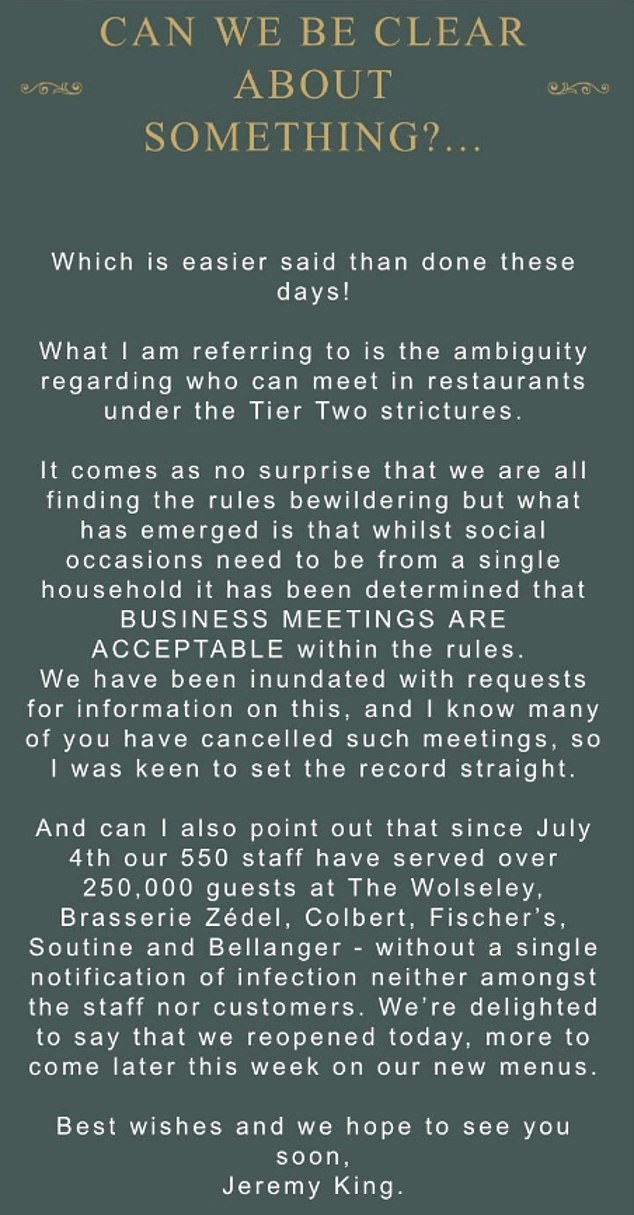 Ministers have pleaded with the public to only use the loophole if absolutely necessary.

A spokesman said: ‘There is a specific exemption which says that people from different households can gather in indoor settings that are open for work purposes.’

They stressed this is meant for freelancers and not a green light for pub meals with friends under the guise of boozy working lunches.

But some restaurants are hoping the loophole could pave the way for a surge in working lunches among the 28million people living under tighter Tier 2 restrictions. 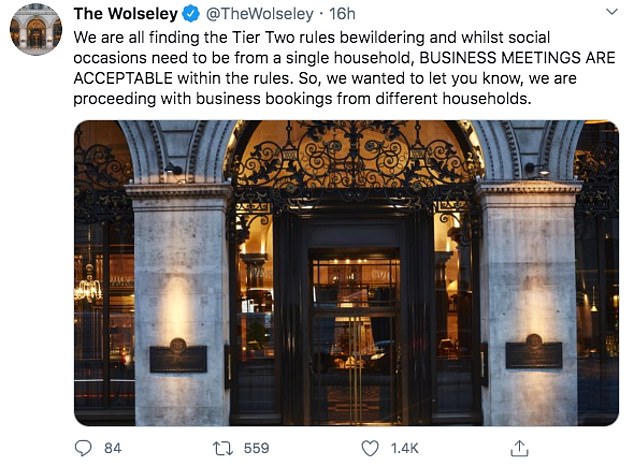 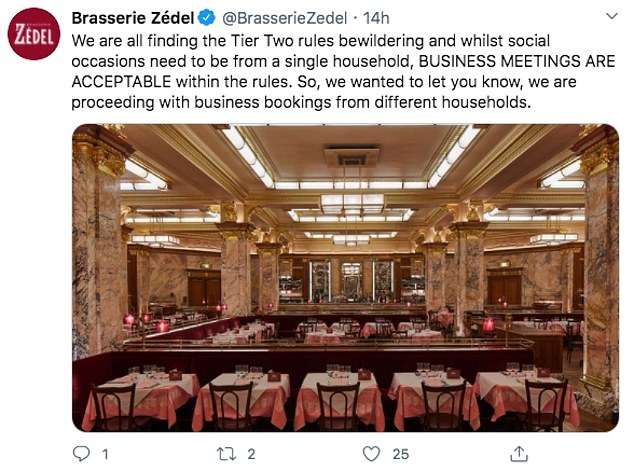 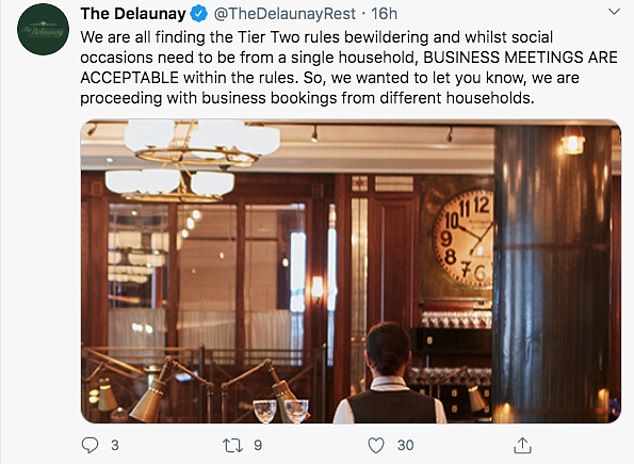 ‘It is disappointing that, despite it being legal for them to host meetings as they have been doing safely for months, the government is encouraging customers not to use these facilities.’

Up to 30 people from different households may meet indoors for work, as long as the place they are meeting is Covid-secure, according to Government guidance.

The loophole caused a stir on Twitter yesterday, with some users planning a ‘working lunch of eight pints at 9pm’ and a ‘9am meeting’ in a Wetherspoon pub.

A No10 spokesman confirmed that while current rules advise people to limit their social contact and work from home ‘where possible’, people are permitted to meet indoors for work purposes ‘in high or very high areas’. 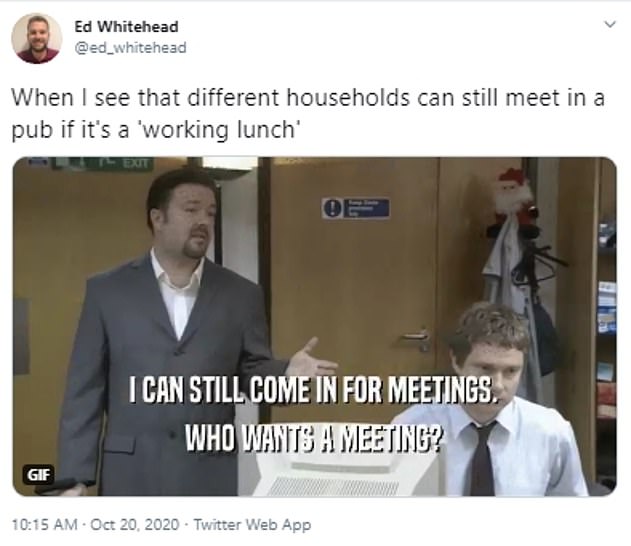 The loophole caused a stir on Twitter yesterday, with some users planning a ‘working lunch of eight pints at 9pm’ and a ‘9am meeting’ in a Wetherspoon pub

Around 200 workers, from farmers to chefs and events organisers, filled Parliament Square with a metallic uproar by banging metal cooking utensils on Monday morning.

From midnight on Friday, London was thrown into tier two lockdown meaning individuals from different households are banned from mixing indoors – even in hospitality venues – with outdoor socially distanced mingling permitted for groups of up to six.

Critics have warned the lockdown puts in force a ‘maximum squeeze on revenue and no support’ for struggling businesses and employees.

Almost a third of restaurants and pubs in England are set to be affected by the tougher tier curbs – more than 8,500 venues and 5,000 pubs.

Restaurateurs and landlords are now desperately calling for much-needed clarity over the loophole, which they hope could revive their business.

And roughly 200 hospitality workers, including celebrity chef Yotam Ottolenghi, took to Parliament Square in London on Monday to protest against the draconian restrictions.

Ottolenghi said: ‘I’ll be in Parliament Square with my mask on tomorrow to protest against the ludicrous Tier 2 policy that’s killing the hospitality industry in England.

‘It’s not effective and it will harm jobs!’

The Night Time Industries Association, which represents bars, pubs and clubs in the UK, said it was taking legal advice after a Metropolitan Police borough licensing team suggested they could request photographic ID and names and addresses from all customers.

Mike Kill, chief executive of the Night Time Industries Association, said: ‘We have sought legal advice regarding the communication from the Metropolitan Police.

‘If people turn up and their addresses or names don’t match because people aren’t married or older children have moved back home do they turn them away?

‘We have also seen in some cities police looking at social media like Facebook to say customers are not social distancing.’

Emma McClarkin, of the British Beer & Pub Association, said: ‘Expecting pubs to demand all customers produce photographic identification with names and addresses would be fundamentally inappropriate and completely unacceptable.

‘Pubs continue to ensure that all safety guidelines within the three tiers are adhered to.’

A Met spokesman said: ‘The local advice from one of the Met’s licensing teams about this is just that – advice.

‘It was well-intentioned and we hope that it is taken in that way.

Our primary aim is to help keep all Londoners safe and ensure, through engagement and explanation, that the relevant Covid legislation is adhered to.’