Melbourne’s far-from-leafy western suburbs do not have enough trees to support intense development, and residents, councillors and planners say something needs to be done.

The west never had much bush, sitting on volcanic plains that were mostly grassland, before clearing for farmland began. Now, the growth areas are rapidly becoming housing estates, with homes built to the corners of each lot without room for trees or gardens. 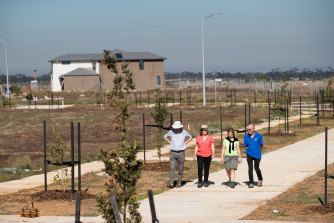 Lisa Field (second from the left) with fellow members of the Werribee River Association and Transition Wyndham pictured at a new estate at Wyndham Vale.Credit:Jason South

“We are fundamentally changing what that landscape is by turning it into suburbia” said town planner Jane Keddie, the Planning Institute of Australia’s Victorian vice-president.

“To make sure that we’re delivering communities and places where people want to live … we also need to deliver more trees.”

Lisa Field, part of sustainability group Transition Wyndham and the Werribee River Association, said older neighbourhoods in the area had established trees but the urban heat island effect was noticeable in newer suburbs.

“You don’t have that tree canopy cover to be riding under or walking under. Where there are new trees … they’re still not providing shade over the walking trails,” Ms Field said.

“So on a hot day, you don’t have anything. You’re surrounded by concrete, basically.”

Vegetation has a cooling effect whereas concrete and other man-made materials absorb and radiate heat, raising the air temperature.

The issue was considered at a parliamentary inquiry into green space for growing communities last week when Tarneit MP Sarah Connolly said her electorate did not have enough trees. 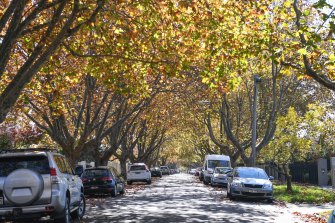 She challenged Julian Lyngcoln, the deputy secretary of planning at the Department of Environment, Land, Water and Planning, whether development guidelines had the balance right.

“I do think that more can be done,” Mr Lyngcoln said.

Ms Keddie said there was broad agreement across the industry, including among developers and regulators, that better outcomes were needed.

Efforts to improve, such as the Greening the West campaign, have slowly increased canopy coverage. Analysis by RMIT found the region gained a modest 275 hectares of tree coverage between 2014 and 2018.

Brimbank Council – which has planning controls for two-lot subdivisions that require two trees at the front and one in the back of property – wants canopy cover to reach 30 per cent by 2046.

Adele Hegedic, mayor of Wyndham Council, which has some of the lowest canopy coverage in Australia, said serious investment was needed from the state government.

“Our residents are really feeling it,” she said.

Dr Joe Hurley, from RMIT’s Centre for Urban Research, said planting efforts over the past five to 10 years would make an impact as the trees grow. But more was needed to encourage greenery on residential land, he said.

“When you tend to have a small garden, you want to get the most out of it. There’s a lot of people going towards that low-maintenance deck with a few shrubs around it, rather than looking at where a large canopy tree can go,” Dr Hurley said.

While Melbourne’s western suburbs need to add more trees, and are slowly doing so, the eastern suburbs are struggling to retain their canopy.

Overall, Melbourne lost 0.3 per cent of its canopy between 2014 and 2018. Almost 2000 hectares of trees were cut from the leafy east and south-east, mostly at residential properties.

A tree needs to be at least three metres tall to be counted in RMIT’s analysis as providing canopy coverage.

Ms Keddie said the loss in the eastern suburbs was largely a result of private gardens being “moonscaped” to make way for subdivisions.

Experts said infrastructure often conflicts with trees in cities and greenery needed to be valued as a necessary part of neighbourhoods.

Dr Hurley said: “If you keep taking out the one tree every time there might be a conflict with a power line or with cars, then the … cumulative impact of that is significant.”

Development and trees don’t need to be pitted against one another, he said, but regulations had been ineffective despite a broad willingness to improve canopy coverage.

Infrastructure Victoria has recommended mandating 30 per cent canopy coverage in all new growth areas as part of its draft 30-year strategy.

The Victorian Planning Authority (VPA) has precinct guidelines for growth areas, which are currently under review.

The state government is upgrading and creating 22 parks in the western suburbs and is working with Resilient Melbourne on an urban forest strategy.

“Parks are not only vital for relaxation and fitness in local communities, they reduce heat, stormwater runoff and energy demand, and provide more habitats for biodiversity – and are a critical part of our plan to tackle climate change and its impacts on our cities,” a government spokeswoman said.