A Lisbon court is hearing the case against 31-year-old Rui Pinto, who was extradited last year from Hungary where he had lived since 2015.

Pinto admits he was behind the exposes published between 2015-18 on the “Football Leaks” website, where he used the pseudonym “John” but argues he is a whistle blower, not a criminal. 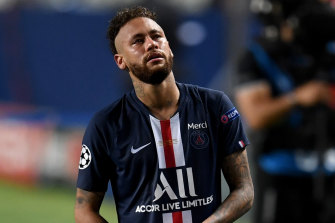 Neymar of Paris Saint-Germain was one of the big names caught up in the “Football Leaks”.Credit:Getty Images

The website published information about the transfer fees and salaries of such stars as Brazil’s Neymar, then at FC Barcelona, Radamel Falcao at AS Monaco and Gareth Bale at Real Madrid. It also alleged that Manchester City and Paris Saint-Germain flouted European soccer’s spending rules.

His lawyers say Pinto has helped authorities in Europe and beyond to tackle crime in the sport, especially murky financial dealings.

They say Pinto was about to enter a witness protection program in France, with whose authorities he was cooperating on soccer investigations, before he was arrested. They say he also cooperated with authorities in Belgium, Switzerland and Malta.

Police in Portugal say he has helped with their inquiries, too, prompting a Lisbon judge to release Pinto from pretrial custody a month ago.

Pinto is arguing that the ends justify the means. He insists he was motivated by public duty in exposing serious crimes that authorities missed.

His lawyers said in a letter to the trial judge that Pinto was “outraged” by illicit money-making in the sport and investigated what was going on because authorities weren’t doing enough.

Pinto says a “substantial part” of the documents he published were anonymously leaked to him, not hacked.

If found guilty on all counts, Pinto could face decades in prison.

Among Pinto’s defence witnesses are US whistle blower Edward Snowden, who leaked classified information from the National Security Agency and may testify by video link from Russia. The defence has also called Portugal’s chief detective, Luis Neves.

Pinto also says he was behind an expose earlier this year about alleged financial wrongdoing in Angola, a former Portuguese colony in Africa, which became known as “Luanda Leaks” in a reference to that country’s capital.