Washington: By now, it's well-established that most of the arguments put forward by President Donald Trump's re-election campaign in its challenge of the results of the 2020 election are baseless and highly speculative.

Even Trump allies acknowledge the apparent futility of the effort. Others have reasoned that there's no harm in going through the motions, with one anonymous GOP official asking, "What's the downside for humouring him" for a little while?

But as scenes in courtrooms across the country in recent days have shown, there is indeed a downside for those tasked with actually pursuing these claims. Repeatedly now, they have been rebuked by judges for how thin their arguments have been. 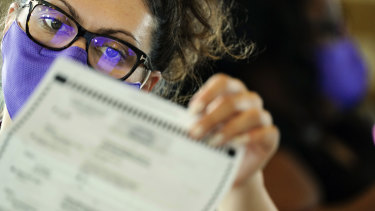 The most famous scene came in Pennsylvania, where a Trump lawyer strained to avoid acknowledging that their people were, in fact, allowed to observe the vote-counting process in Philadelphia. As reported:

"At the city's federal courthouse on Thursday evening, attorneys for Trump asked a judge to issue an emergency order to stop the count, alleging that all Republican observers had been barred.

"Under sharp questioning from Judge Paul S. Diamond, however, they conceded that Trump in fact had 'a nonzero number of people in the room,' leaving Diamond audibly exasperated.

"'I'm sorry, then what's your problem?' asked Diamond, who was appointed to the federal bench by President George W. Bush. Denying Trump's request, Diamond struck a deal for 60 observers from each party to be allowed inside.

"At one point on Friday afternoon, 12 Republican observers and five Democrats were watching the count, according to a ballot counter who was working."

After that "nonzero" answer, Diamond pressed the Trump campaign lawyer to be more explicit – and he suggestively invoked their standing with the bar: "I'm asking you as a member of the bar of this court: Are people representing the plaintiffs in the room?" The lawyer responded more directly: "Yes." By the end of the hearing, Diamond invoked his right to make sure lawyers in his courtroom acted in good faith.

Another Trump lawyer, Jonathan Goldstein, was also grilled by a Pennsylvania judge this week. Under questioning, he acknowledged that, contrary to Trump's claims about rampant voter fraud, he wasn't actually alleging fraud in the 592 ballots he sought to disqualify in Montgomery County, Pennsylvania.

Again, Trump's lawyer strained to avoid directly answering the question, but was ultimately forced to acknowledge it:

The court: In your petition, which is right before me – and I read it several times – you don't claim that any electors or the Board of the County were guilty of fraud, correct? That's correct?

Goldstein: Your Honour, accusing people of fraud is a pretty big step. And it is rare that I call somebody a liar, and I am not calling the Board of the (Democratic National Committee) or anybody else involved in this a liar. Everybody is coming to this with good faith. The DNC is coming with good faith. We're all just trying to get an election done. We think these were a mistake, but we think they are a fatal mistake, and these ballots ought not be counted.

The court: I understand. I am asking you a specific question, and I am looking for a specific answer. Are you claiming that there is any fraud in connection with these 592 disputed ballots?

Goldstein: To my knowledge at present, no.

The court: Are you claiming that there is any undue or improper influence upon the elector with respect to these 592 ballots?

Goldstein: To my knowledge at present, no.

The Trump campaign also sought to temporarily stop counting some ballots in Detroit. It cited a GOP poll watcher who had said she had been told by an unidentified person that late mail ballots were being predated to before Election Day, so they would be considered valid.

The judge, Cynthia Stephens, repeatedly asserted this was hearsay, but Trump campaign lawyer Thor Hearne sought to argue that it wasn't – despite it having been someone who said they heard about something they weren't personally involved in. He pointed to a vague note the poll watcher produced – which said "entered receive date as 11/2/20 on 11/4/20" – as evidence:

Stephens: So I want to make sure I understand you. The affiant [the person who makes an affidavit] is not the person who had knowledge of this. Is that correct?

Hearne: The affiant had direct first-hand knowledge of the communication with the elections inspector and the document they provided them.

Stephens: OK, which is generally known as hearsay, right?

Hearne: I would not think that's hearsay, your honour. That's first-hand personal knowledge by the affiant of what she physically observed. And we included an exhibit which is a physical copy of the note that she was provided.

The two later returned to the point, after Stephens reviewed the note, and Stephens echoed Judge Diamond's exasperation:

Stephens: I'm still trying to understand why this isn't hearsay.

Stephens: I absolutely understand what the affiant says she heard someone say to her. But the truth of the matter … that you're going for was that there was an illegal act occurring. Because other than that I don't know what its relevancy is.

Hearne: Right. I would say, your honour, in terms of the hearsay point, this is a first-hand factual statement made by Ms Conoron, and she has made that statement based on her own first-hand physical evidence and knowledge —

Stephens: 'I heard somebody else say something.' Tell my why that's not hearsay. Come on, now.

Hearne: Well it's a first-hand statement of her physical –

Stephens: It's an out-of-court statement offered where the truth of the matter is (at-issue), right?

In a later written decision, Stephens slammed the argument as "inadmissible hearsay within hearsay." And after the campaign appealed, Stephens rebuked it Monday for failing to include required documentation.

"I regret to inform you that your submission is defective," Stephens said.

Another of the Trump teams' claims crumbled rather quickly in Georgia.

In Chatham County, as in Michigan, the Trump campaign cited supposed evidence that 53 late ballots might have been predated so they could be counted. Except two witnesses they called acknowledged under oath that they didn't know whether the ballots were received after the deadline. And two others for the local board of elections testified that they were, in fact, received on time.

Judge James Bass dismissed the case in a one-sentence, eight-word ruling, saying, "I'm denying the request and dismissing the petition" and abruptly adjourned the hearing. He then elaborated in a written opinion: "… The Court finds that there is no evidence that the ballots referenced in the petition were received after 7pm on election day, thereby making those ballots invalid. Additionally, there is no evidence that the Chatham County Board of Elections or the Chatham County Board of Registrars has failed to comply with the law."

The common thread running through all of these is that Trump's lawyers are regularly offering a significantly more watered-down version of Trump's claims about rampant voters fraud – because they, unlike Trump, actually have to substantiate their claims. And as these exchanges show, it's a rather thankless task that can rather quickly land them on a judge's bad side.