Washington: US President Donald Trump has told the parents of a British teenager that the woman allegedly responsible for their son's death, the wife of a US diplomat, would not return to Britain.

Following a meeting with Trump at the White House, the parents of Harry Dunn said they refused to meet Anne Sacoolas who was also in the building. 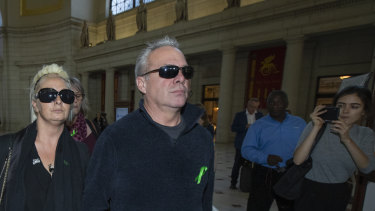 Charlotte Charles, the mother of Harry Dunn, and her her husband Bruce arrive in the US.Credit:AP

Their son, 19, was killed when his motorbike was involved in a head-on collision outside in Northamptonshire in August.

Sacoolas, the motorist allegedly responsible for the crash, claimed diplomatic immunity and was allowed to return to the US.

The White House declined to say what message the president had delivered, but a spokesman for the family suggested they may have been disappointed by it.

"Meeting with President Trump complete," tweeted the spokesman, Radd Seiger. "We will review where we are up to and determine next steps shortly when we will comment further. In the meantime the search for #Justice4Harry continues."

Trump told the parents that Sacoolas would not be extradited to the Britain, according to the report.

Harry Dunn, 19, was killed in August when his motorcycle collided with a car allegedly driven by Sacoolas, the US diplomat's wife, outside a British air force base in southern England used by the US military.

Sacoolas left Britain shortly after, though police released a statement saying she had previously told them she had no plans to depart. Her current whereabouts are uncertain.

Dunn's parents have been pressing for Sacoolas to return to Britain and held a press conference in New York on Monday to press their case. Charlotte Charles, Dunn's mother, tearfully urged her to "do the right thing" and to "face us as a broken family," along with the UK legal system.

"She needs to set an example to her own children that you can't run away," Charles said.

Trump last week called the collision "a terrible accident" and said he planned to intervene by potentially arranging a meeting between the Dunns and Sacoolas.

Still, he seemed sympathetic to Sacoolas, saying that accidentally driving on the wrong side of the road in England, where drivers drive on the left instead of the right side of the street, is something that "can happen," and that he had once done so himself.

A statement previously released on Sacoolas' behalf said she intended to continue to cooperate with authorities.

"Anne is devastated by this tragic accident. No loss compares to the death of a child and Anne extends her deepest sympathy to Harry Dunn's family," it read.