President Trump said on Monday that he would not debate any of the three Republicans who have stepped forward to challenge him for his party’s 2020 presidential nomination.

“They’re all at less than 1 percent. I guess it’s a publicity stunt,” Trump told reporters gathered at the White House.

Weld ran for vice president on the third-party Libertarian line in 2016, along with former New Mexico Gov. Gary Johnson. The ticket received nearly 4.5 million votes. Walsh served one term in Congress as a Republican representing Illinois, but after redistricting lost his bid for a second term in 2012.

Sanford served as governor of South Carolina before the discovery of an extramarital affair with an Argentine woman led him to step down at the conclusion of his second term. He also served in the U.S. House from 2013 to 2019, before he himself was defeated in a primary. As he announced his entry into the presidential race, he cited the need for debate within his party. 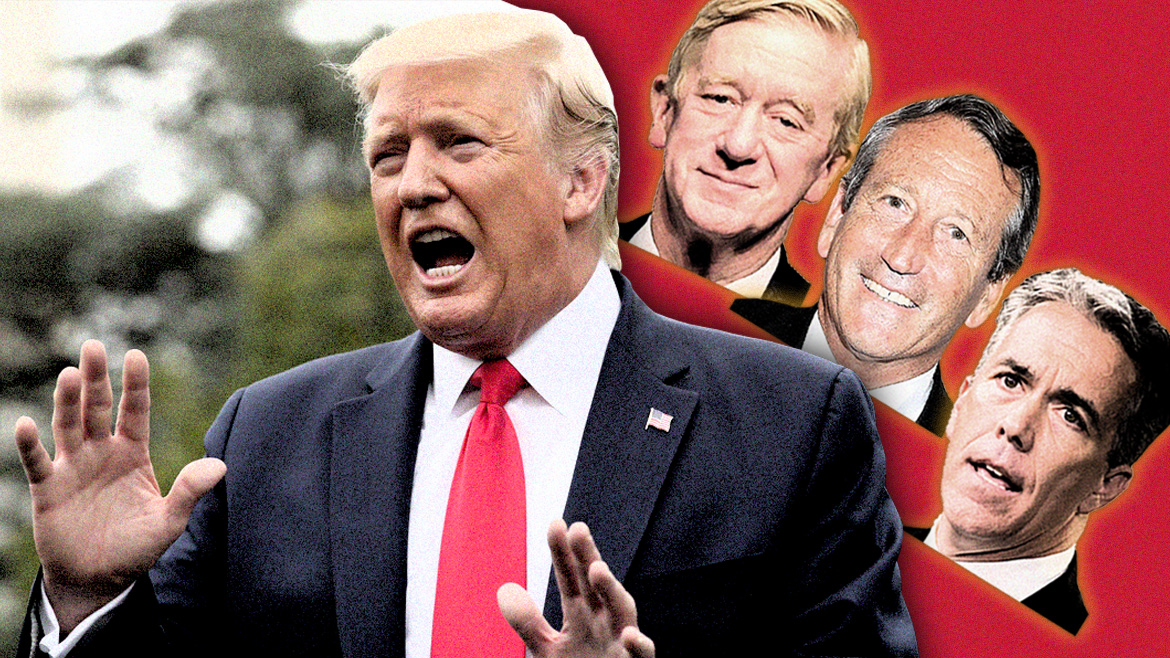 I am compelled to enter the Presidential Primary as a Republican for several reasons – the most important of which is to further and foster a national debate on our nation’s debt, deficits and spending.

Walsh, meanwhile, has cast his challenge to Trump in more dire terms.

You don’t primary Trump because of the debt or his tariffs. The President of the United States is a pathological liar & a malignant narcissist who last night called an American a “foul-mouthed wife.”

This isn’t about the issues. This is ONLY about saving the country from Trump.

Incumbent presidents have not infrequently faced primary challenges from members of their own party. In 1976, former California Gov. Ronald Reagan sought to replace President Gerald Ford on the Republican ticket. Four years later, former Sen. Edward Kennedy took on President Jimmy Carter, and in 1992, hard-right pundit Patrick Buchanan mounted a campaign against President George H.W. Bush. But none of the incumbents agreed to a primary debate.

Last week, the Republican Party in four states — Arizona, Kansas, Nevada and South Carolina — announced they planned to cancel 2020 primaries, effectively putting an end to the chances for long-shot GOP challenges to Trump.

Canceled primaries? What are you afraid of, Mr. No-Show? Intelligent, experienced, honest and decent competitors? Now more than ever, @realDonaldTrump, you can run but you cannot hide. #LetTheGamesBegin

The president said he understood the decision to scrap the primaries.

“The three people are a total joke. They’re a laughingstock. And I have nothing to do — The four states that canceled it don’t want to waste their money,” Trump said. “If there was a race, they would certainly want to do that. But they’re considered to be a laughingstock. They’re considered to be a joke, and those four states don’t want to waste their money. Having primary campaigns and having a primary election is very expensive.”

Download the Yahoo News app to customize your experience.