Sweden’s chances of joining NATO go up in flames after Koran book-burning: Turkey’s President Erdogan says the Swedes ‘should not expect our support’ after anti-Islam politician’s stunt

Turkey’s President Recep Tayyip Erdogan warned Sweden on Monday that it should not expect his country’s support to join NATO after an anti-Islam politician set fire to the Koran in Stockholm.

Convicted far-right leader Rasmus Paludan, 41, was allowed by Swedish police to burn the book outside the Turkish embassy in Stockholm on Saturday.

As expected, the burning of the Koran has provoked strong reactions in Turkey, a Muslim-majority country.

‘Sweden should not expect support from us for NATO,’ President Erdogan said in his first official response to the incident. 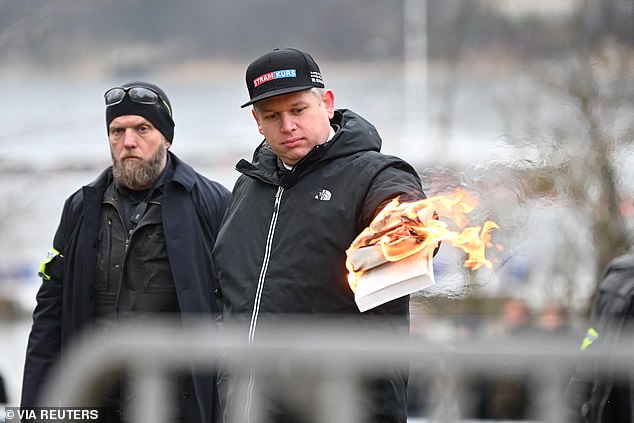 Convicted far-right leader Rasmus Paludan, 41, was allowed by Swedish police to burn the Koran outside the Turkish embassy in Stockholm on Saturday 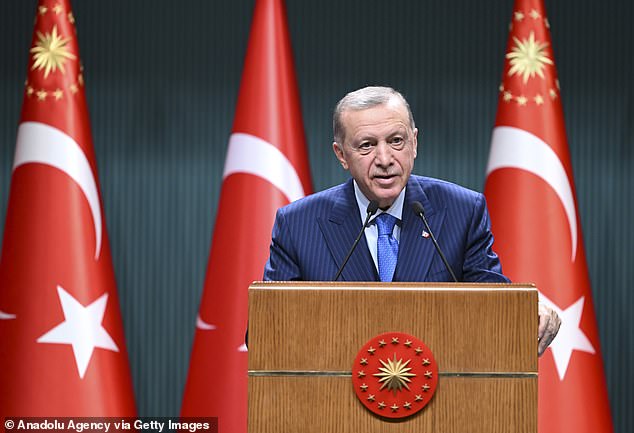 He continued: ‘It is clear that those who caused such a disgrace in front of our country’s embassy can no longer expect any benevolence from us regarding their application for NATO membership.’

The incident has met with fury from Turkey, as protestors were pictured burning a Swedish flag in response in Istanbul on Saturday.

Turkey had appealed to Sweden to stop the protest and called off a visit by Sweden’s defence minister Pal Jonson.

Erdogan said the burning of the Muslim holy book was a hate crime that could not be defended by free speech.

‘No one has the right to humiliate the saints,’ he said in nationally televised remarks.

‘When we say something, we say it honestly, and when someone dishonours us, we put them in their place.’ 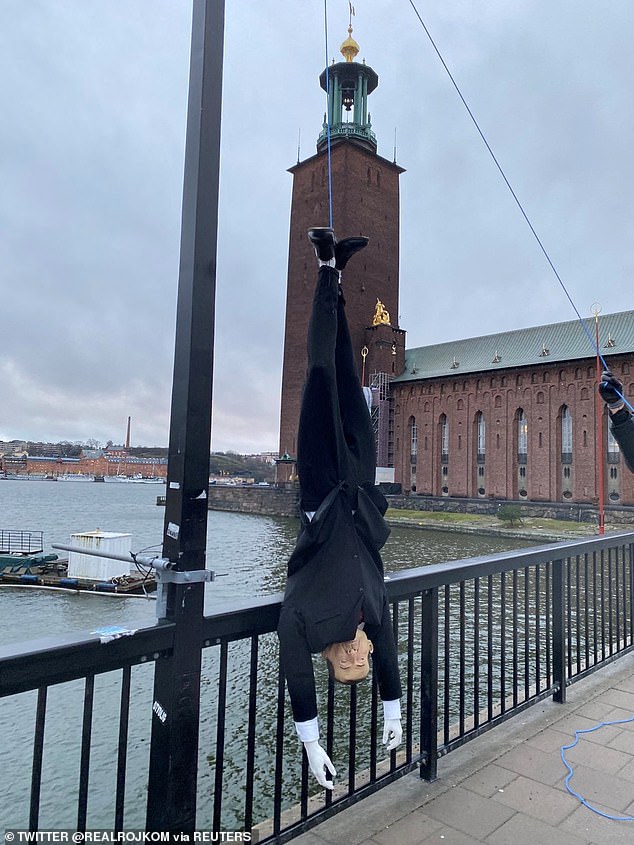 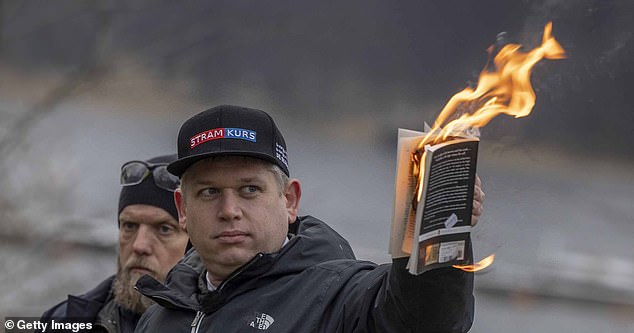 The incident also provoked a strong reaction in Sweden. Here protestors demonstrated outside the Consulate General of Sweden on Sunday 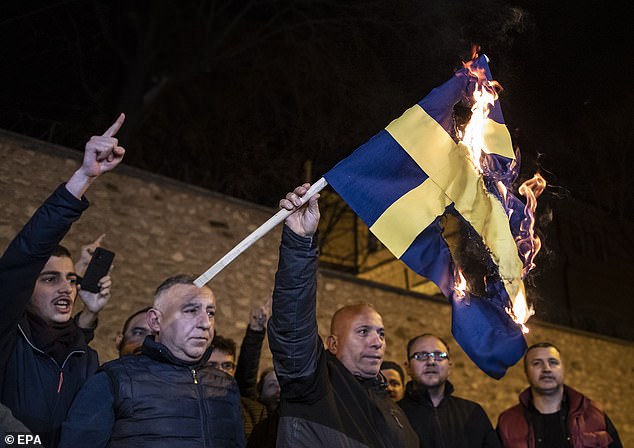 The incident has met with fury from Turkey, as protestors were pictured burning a Swedish flag in response in Istanbul on Saturday

‘I want to express my sympathy for all Muslims who are offended by what has happened in Stockholm today,’ Prime Minister Ulf Kristersson tweeted on Saturday.

Danish-Swedish Paludan said he wanted to ‘mark some freedom of speech’ after the hanging of an effigy of Turkish President Tayyip Erdogan near the Stockholm city hall provoked a strong response in Turkey.

Sweden’s Prime Minister Ulf Kristersson said the effigy was an attempt to sabotage the country’s application to join Nato.

The decision to allow the burning of the Koran came amid strained relations between Sweden and Turkey, following the latter’s decision to push back on Swedish ascension to Nato.

Sweden and Finland have sought Nato membership since the Russian invasion of Ukraine, but their bids must be approved by all 30 Nato member states.

The two Nordic countries still rely on votes from Turkey and Hungary, which Hungarian Prime Minister Viktor Orbán has promised to deliver in 2023. 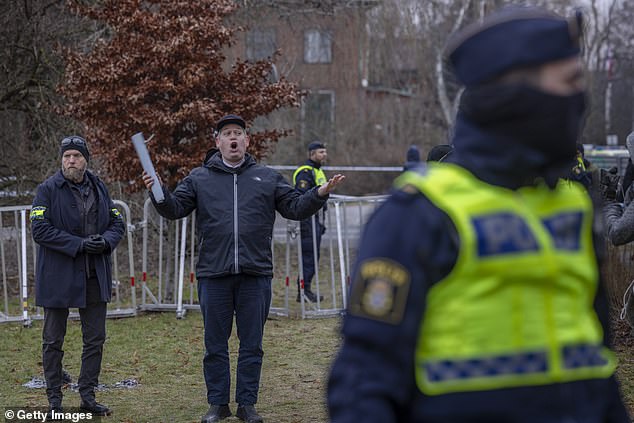 Paladan, the leader of the Danish far-right political party Hard Line, also gave a speech about immigration as the book was burned 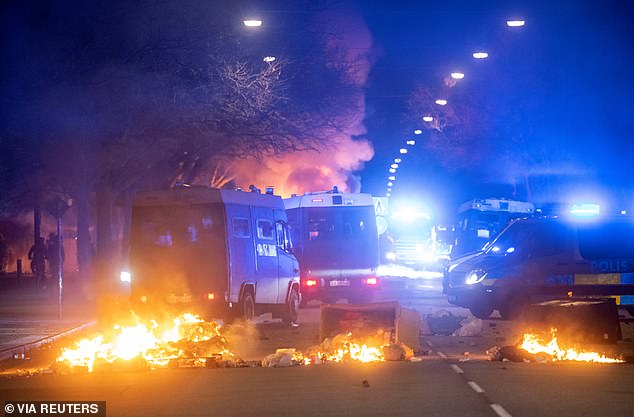 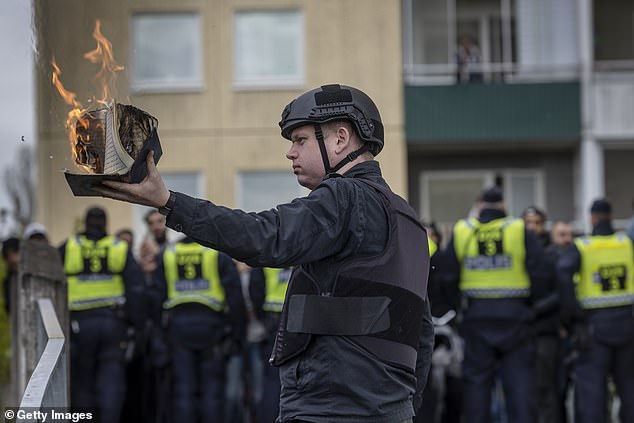 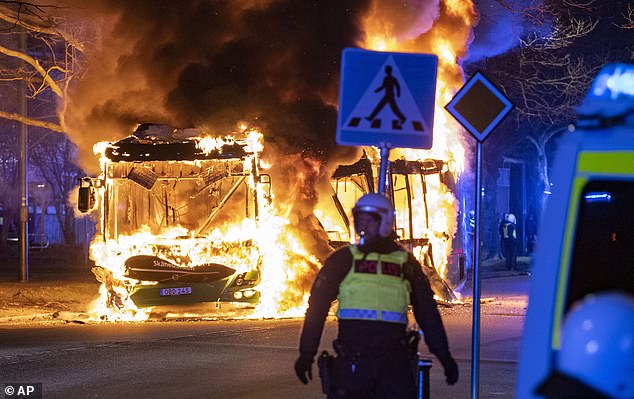 A bus burns as a police officer watches on after riots overnight in Malmo, in the south of Sweden, sparked by an anti-Islam Danish politician carrying out Koran-burning stunts

But Turkish officials said the effigy hanging by pro-Kurdish activists last week was contrary to an agreement made previously under which Sweden and Finland would crack down on Kurdish militants as both seek Turkish approval for NATO membership.

Sweden is home to a large number of Kurds, many of whom fled Turkish persecution in the late 1980s and subsequent crises in the Middle East.

Turkish foreign minister Melvut Cavusoglu said that Swedish inaction over the effigy was ‘absurd’ and that Sweden should not try to fool Turkey by calling the act ‘freedom of speech’.

In recent days, the country has increased the pressure on Sweden, demanding 130 so-called ‘terrorists’ be extradited to Turkey before the Turkish parliament will approve NATO bids.

Paladan is the leader of the Danish far-right political party Hard Line. He has been at the centre of anti-Islamic politics in northern Europe for several years.

The lawyer and YouTuber is known for burning the Koran and for calling for the deportation of all Muslims from Denmark.

Paludan previously said: ‘The enemy is Islam and Muslims. The best thing would be if there were not a single Muslim left on this earth. Then we would have reached our final goal.’