Two-thirds of Brits aged 16 to 24 now have Covid antibodies, according to official blood-testing data.

Government statisticians estimate around 67 per cent of the youngest adults and oldest teenagers in England now have the virus-fighting proteins.

This is despite nearly half of the age group having yet to be vaccinated, with rates lagging behind among the young.

It suggests immunity has also been picked up through natural infection, with the third wave being driven by the rampant spread of the virus among teens and people in their 20s.

Experts said vaccine uptake among the young is good but there is still ‘some way to go’ amid fears the rollout may be stumbling to a halt. 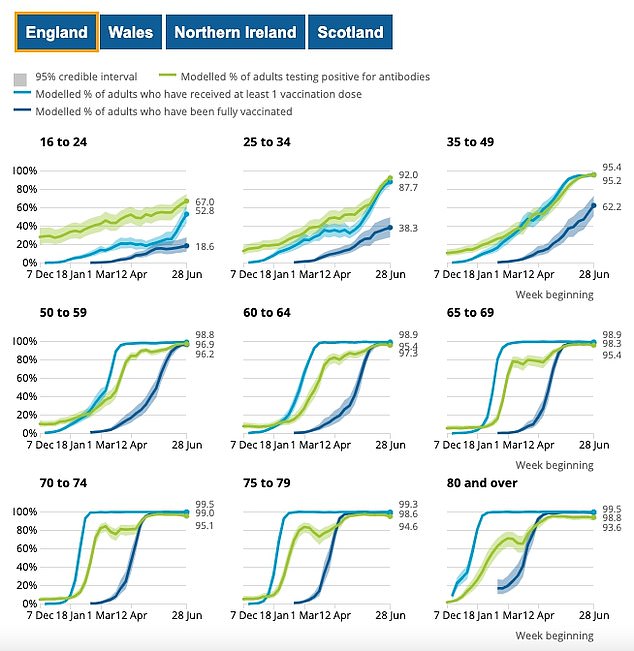 Two thirds of Brits aged 16 to 24 now have Covid antibodies, official data has shown despite nearly half not having had a jab 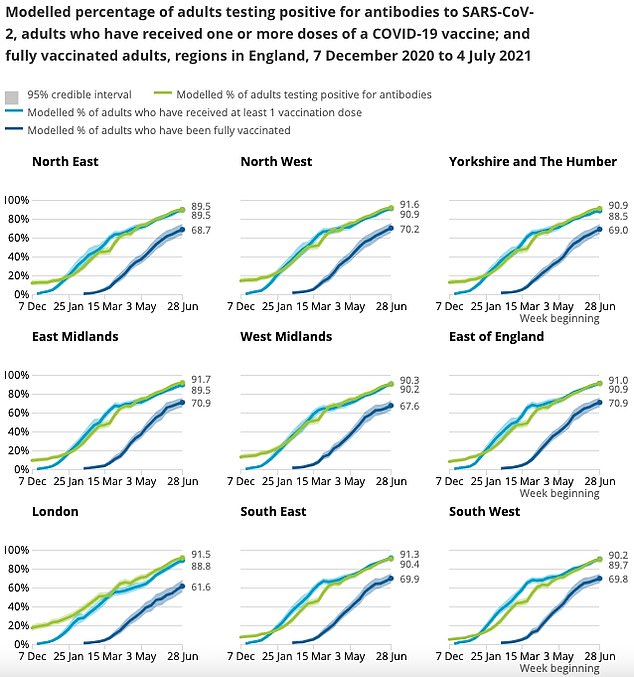 Antibodies were highest in the East Midlands, where 91.7 per cent of all adults tested positive for the proteins

The third wave being driven by the rampant spread of the virus among teens and people in their 20s, with people aged 20 to 24 having the highest infection rate in England (1,133 per 100,000 on July 15) 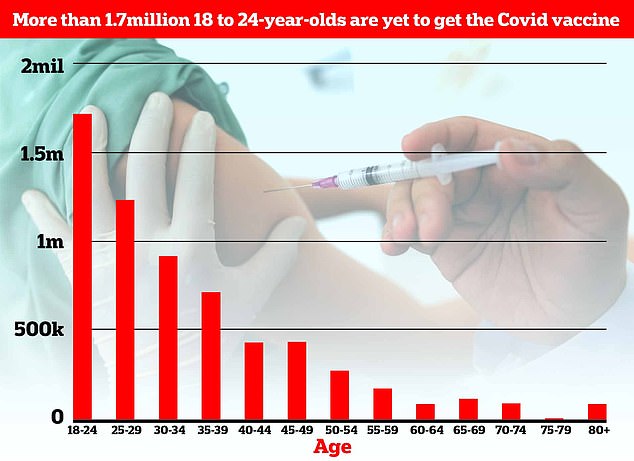 This graph shows the number of people who are yet to be vaccinated against Covid in every age group. It shows there are more than 1.7million 18 – 24 year olds still to get the jab, followed by more than a million 25 to 29-year-olds

The ONS — which analyses tens of thousands of blood samples every fortnight — doesn’t break down whether antibodies came from jabs or infection.

Their presence generally means a person has at least some protection against the disease and won’t fall ill.

Covid vaccines are being sent back by GPs who can’t fill appointments — despite there being nearly 6million Britons who’ve still yet to take up the offer, MailOnline has learned.

Surgeries could not get enough of the jabs at the start of the inoculation drive in December, with millions of Britons rushing to book slots.

But now demand has dried up in some areas, forcing health bosses to redistribute supplies to other locations where there is higher take-up.

No10’s scientific advisers say the UK may have already hit maximum uptake in its inoculation drive, with the number of first doses being dished out every day having halved in a fortnight to fewer than 60,000.

Just 18,186 first doses were administered yesterday, in the worst daily performance since the vaccination campaign began in December.

Experts say Britain is reaching a natural end to its inoculation drive, with the number of people wanting a jab running low.

This is despite NHS England figures suggesting there are still 1.7million 18 – 24 year olds yet to be jabbed. Young people are more reluctant to get the vaccine because they do not see the virus as a threat, scientists say.

Testing positive does not make someone completely immune, however, and people who have them can still get sick.

Getting a positive test result means only that there were a certain amount of them in their body at the time of the test.

Scientists say levels dip naturally over time and people may not have any detectable antibodies now — even if they did so last year.

And likewise, people who test negative may still be protected from the virus because there are other parts of the immune system geared up to fight off invaders, such as T cells.

Today’s ONS antibody report was based on the random blood tests of around 18,000 adults across the UK between June 28 and July 4.

Overall, around 92 per cent of adults in England were found to have them.

For comparison, the figure stood at just 8.7 per cent in December, before the UK’s hugely successful vaccine drive kicked off.

Rates topped 90 per cent in every age group except 16 to 24 year olds, who were the last to get invited for their jab.

Antibody levels were highest in the North West of England, where 91.6 per cent of all adults tested positive for the proteins.

The North West was also the first area to be battered by the third wave, with the Delta variant taking off in the region last month.

The surge in antibodies in young people has been driven by spiralling cases in 20-somethings, with people aged 20 to 24 having the highest infection rate in England — 1,133 per 100,000 on July 15.

Infections are now increasing across all age groups as a result, with the UK recording 46,558 positive tests yesterday — up 27 per cent in a week.

Daily infections are not far off the 68,000 recorded during the darkest days of the pandemic in January.

And No10’s scientific advisers fear levels may breach 200,000 in the coming weeks, as the outbreak continues to grow.

It comes after MailOnline revealed yesterday that GPs are sending back coronavirus vaccines because of low uptake — despite millions still having yet to come forward for their first dose.

But there are still 1.8million 18 – 24 year olds to be jabbed, according to NHS England statistics.

This is despite the vaccine drive being open to all adults since June 17 in England.

And there are 4.5million in other age groups who’ve yet to be vaccinated, the same figures suggest. This includes 1.2million 25 – 29 year olds, and nearly a million 30 – 34 year olds.

Professor Lawrence Young, an infectious diseases expert at Warwick Medical school, told MailOnline there was ‘always a concern’ that jab uptake would fall when the roll-out reached younger Britons.