Every morning, Heidi Wintermeyer dons a bright pink cap and swims with fellow cancer survivors as part of Manly Beach's Bold and Beautiful swimming club. But after a big downpour, she’s wary of the risk of untreated sewage overflowing into the ocean. “Most of the people I swim with know better than to go in after heavy rain,” she says. “They’ll miss swim club rather than get sick.”

But research indicates that getting sick after a downpour is not the only risk: antibiotic-resistant bacteria can last for seven days at some Sydney beaches. If contaminated water is accidentally swallowed, the swimmer is at risk of developing future drug resistance to antibiotics, says Professor Maurizio Labbate of the school of life sciences at the University of Technology Sydney. 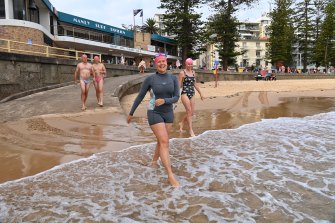 Research published in the Water Research journal in September 2019 showed that after intense rainfall, some antibiotic-resistant bacteria linger in Sydney’s seawater for days after other illness-causing bacteria have died. Professor Labbate said that swallowed seawater could enable drug-resistant DNA to be absorbed by the swimmer in a process called lateral gene transfer.

“It’s a bit like sharing photos via a smartphone Airdrop,” Professor Labbate says. The drug-resistant bacteria bumps against normal human gut bacteria and transfers some of its drug-resistant genes, he says. “You’re then at higher risk of treatment failure the next time you require antibiotics.”

Each year, about 2500 Australians die from drug resistance – known in the health sector as antimicrobial resistance – and rates are increasing. The public health impact is serious but not yet visible.

If no action is taken, a global death toll of 10 million people a year by 2050 is predicted in the British government’s policy on antimicrobial resistance.

According to Dr Shaban, the impact is that routine operations such as knee surgery or caesarean sections could result in longer, more painful hospital stays and increased deaths.

“It doesn’t matter how sophisticated we are in the food chain,” he says. “Drug resistance undermines our whole system of healthcare.''

What you can do

Dr Shaban urges individuals to help flatten the curve of drug resistance by reducing antibiotic use.

Daily pollution reports of Sydney beaches are posted by Beach Watch, a program of the NSW Department of Planning, Industry and Environment. The Beach Watch website does not yet warn of antibiotic resistance bacteria in seawater.

However, Professor Justin Seymour, who led research project the UTS Climate Change Cluster, continues to work with it. “The department are a great partner because they’re interested in the science," Professor Seymour says. "It’s a plus that government is looking at antimicrobial resistance here and not turning a blind eye to it.”

With the rainy season coming, Ms Wintermeyer is not deterred. “I use a swim snorkel, which stops me from breathing in any water,” she says. “So I should be OK.”