The White House is probing Chinese telecoms giant Huawei over fears US cell towers fitted with its gear close to military bases could send sensitive information to China.

American authorities are worried the firm could gain classified intel on dills and the readiness of bases and personnel via the equipment, Reuters reported.

Two sources involved in the matter revealed the probe, requesting anonymity as the investigation is confidential and involves national security.

The Commerce Department launched its investigation shortly after President Biden took office in January last year, the sources said, following the implementation of rules to flesh out a May 2019 executive order that gave the agency the investigative authority.

The agency subpoenaed Huawei in April 2021 to learn the company’s policy on sharing data with foreign parties that its equipment could capture from cell phones. 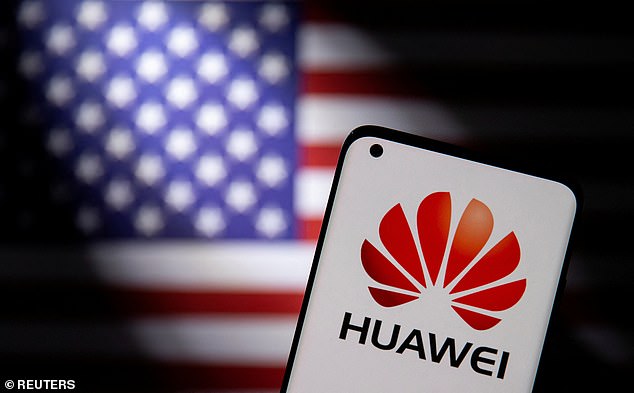 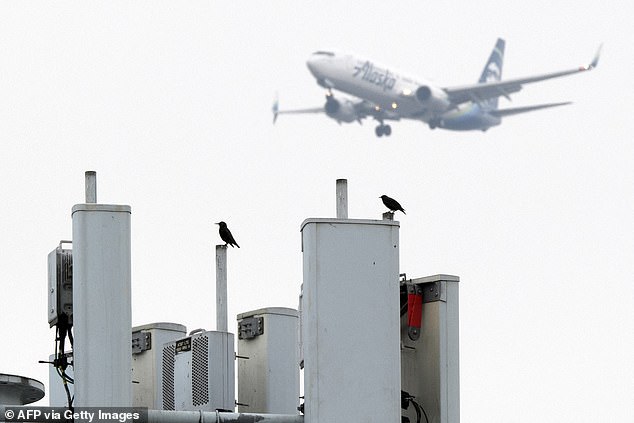 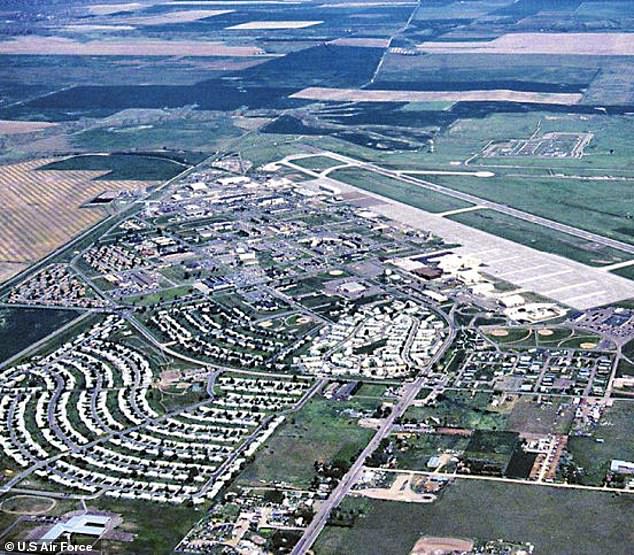 That included messages and geolocational data, according to the 10-page document seen by Reuters.

The Commerce Department said it could not ‘confirm or deny ongoing investigations.’ It added: ‘Protecting U.S. persons’ safety and security against malign information collection is vital to protecting our economy and national security.’

Huawei did not respond to a request for comment. The company has strongly denied US government allegations that it could spy on US customers and poses a national security threat.

The Chinese embassy in Washington did not respond to the specific allegations. In an emailed statement, it said: ‘The US government abuses the concept of national security and state power to go all out to suppress Huawei and other Chinese telecommunications companies without providing any solid proof that they constitute a security threat to the US and other countries.’

Reuters could not determine what actions the agency might take against Huawei.

Eight current and former US government officials said the probe reflects lingering national security concerns about the company, which has already been hit with a slew of restrictions in recent years.

If the Commerce Department determines Huawei poses a national security threat, it could go beyond existing restrictions imposed by telecoms regulator the Federal Communications Commission (FCC).

Using broad new powers created by the Trump administration, the agency could ban all US transactions with Huawei, demanding domestic carriers that still rely on its gear quickly remove it or face fines or other penalties, a number of lawyers, academics and former officials interviewed by Reuters said.

Huawei has long been dogged by US government allegations it could spy on U.S. customers, though authorities in Washington have made little evidence public. The company denies the allegations.

‘If Chinese companies like Huawei are given unfettered access to our telecommunications infrastructure, they could collect any of your information that traverses their devices or networks,’ FBI Director Christopher Wray warned in a speech in 2020. ‘Worse still: They’d have no choice but to hand it over to the Chinese government, if asked.’ 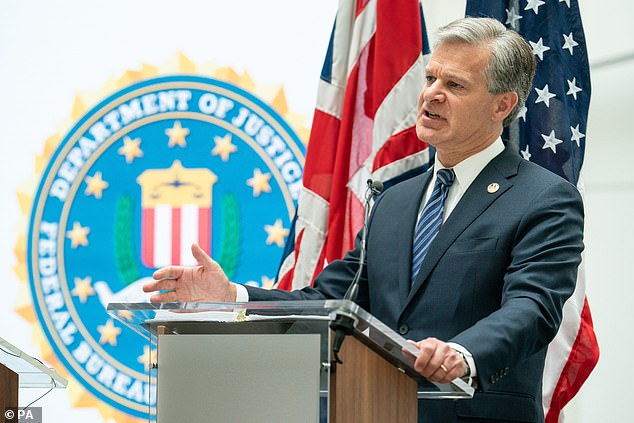 FBI director Christopher Wray (pictured last week) warned in 2020: ‘If Chinese companies like Huawei are given unfettered access to our telecommunications infrastructure, they could collect any of your information that traverses their devices or networks’

Reuters could not determine if Huawei’s equipment is capable of collecting that sort of sensitive information and providing it to China.

‘If you can stick a receiver on a (cellphone) tower, you can collect signals and that means you can get intelligence. No intelligence agency would pass an opportunity like that,’ said Jim Lewis, a technology and cybersecurity expert at DC think tank the Center for Strategic and International Studies (CSIS).

One move to address the perceived threat was a 2019 law and related rules forbidding US companies from using federal subsidies to buy telecoms equipment from Huawei. It also tasked the FCC with compelling US carriers that receive federal subsidies to purge their networks of Huawei equipment, in return for reimbursement.

But the so-called ‘rip and replace’ deadline to remove and destroy Huawei equipment completely will not kick in until mid-2023 at the earliest, with additional opportunities for companies to seek extensions. And reimbursements will only reach 40 percent of the total requested for now.

Cell towers equipped with Huawei gear that are close to sensitive military and intelligence sites have become a particular concern for US authorities, according to the two sources and an FCC commissioner.

Brendan Carr, one of the FCC’s five commissioners, said that cellphone towers around Montana’s Malmstrom Air Force Base – one of three that oversee missile fields in the United States – ran on Huawei technology.

In an interview this week, he told Reuters there was a risk that data from smartphones obtained by Huawei could reveal troop movements near the sites: ‘There´s a very real concern that some of that technology could be used as an early warning system if there happened to be, God forbid, an ICBM missile strike.’ 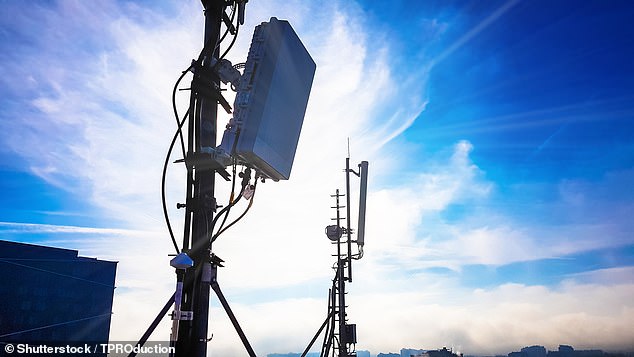 A Huawei-built 5G cellular tower in Australia, pictured three years ago. The company denies it can transmit information from near US military bases back to China, and that it has done so

Reuters was unable to determine the exact location or scope of Huawei equipment operating near military facilities. Individuals interviewed by Reuters pointed to at least two other likely cases in Nebraska and Wyoming.

Crystal Rhoades, a commissioner at Nebraska’s telecoms regulator, has flagged to media the risk posed by the proximity of cell towers owned by Viaero to intercontinental ballistic missile (ICBM) silos in the western part of the state.

ICBMs carry nuclear warheads to targets thousands of miles away and are stored in underground silos near military bases. The Nebraska cell towers are near a missile field overseen by F.E. Warren Air Force Base in neighboring Wyoming.

Viaero provides mobile telephone and wireless broadband services to about 110,000 customers in the region. It said in a 2018 filing to the FCC opposing the commission’s efforts at curbing Huawei’s expansion that approximately 80% of its equipment was manufactured by the Chinese firm.

That gear could potentially enable Huawei to glean sensitive information about the sites, Rhoades told Reuters in June.

‘An enemy state could potentially see when things are online, when things are offline, the level of security, how many people are on duty in any given building where there are really dangerous and sophisticated weapons,’ Rhoades said.

Rhoades said in July that she had not been updated on rip and replace efforts by Viaero in more than two years, despite requesting updated information from the company in recent weeks.

At the time of last contact, the company said it would not begin removal efforts until the FCC money became available.

The FCC advised companies on Monday how much of their funding requests it can reimburse.

In Wyoming, then CEO of rural carrier Union Wireless, John Woody, said in a 2018 interview with Reuters that the company’s coverage area included ICBM silos near the F.E. Warren Air Force Base and that its equipment included Huawei switches, routers and cell sites.

F.E. Warren Air Force Base referred comment on the Huawei equipment to the Pentagon. The United States Strategic Command, which is responsible for nuclear operations, said in a statement to Reuters: ‘We maintain constant awareness of activities near our installations and sites.’ It noted that ‘any concerns are on a whole of government level’ but declined to provide further details on what those concerns are.

Rick Sofield, a former DOJ official in the national security division who reviewed telecoms transactions, said the Commerce Department probe could give additional bite to the FCC´s crackdown but there was nothing new in targeting Huawei.

‘The U.S. government´s concerns regarding Huawei are widely known so any information or communications technology company that continues to use Huawei products is assuming the risk that the U.S. government will come knocking,’ said Sofield, who represents U.S. and foreign companies facing U.S. national security reviews. He said he has not worked for Huawei.

The Commerce Department is using authority granted in 2019 that allows it to ban or restrict transactions between U.S. firms and internet, telecom and tech companies from ‘foreign adversary’ nations including Russia and China, according to the executive order and related rules.

The two sources familiar with the Huawei investigation and a former government official said Huawei was one of the Biden administration’s first cases using the new powers, referred to Commerce in early 2021 by the Justice Department.

The Justice Department referred requests for comment by Reuters to Commerce.

The subpoena is dated April 13, 2021, the same day that Commerce announced a document request was sent to an unnamed Chinese company under the new powers.

It gives Huawei 30 days to provide seven years’ worth of ‘records identifying Huawei’s business transactions and relationships with foreign entities located outside of the United States, including foreign government agencies or parties, that have access to, or that share in any capacity, U.S. user data collected by Huawei.’