Victoria has recorded two new cases of the Omicron variant of COVID-19 overnight, both of which are linked to an international flight. It brings the total number of confirmed cases of the variant in Victoria to three.

The cases involve two passengers who landed in Melbourne on a flight from Dubai on November 30. One of the passengers had previously been identified as a suspected Omicron case by authorities. 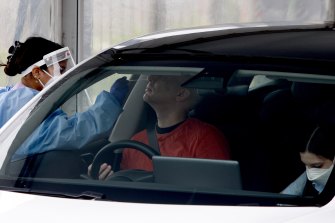 Authorities are keeping a close eye on suspected Omicron cases in the community. Credit:Dean Sewell

Genomic testing is underway to determine if a third person on the flight is also carrying the Omicron variant.

Three suspected cases that were not linked to overseas travel have either been confirmed as or are likely to be the Delta variant, the Health Department said in a statement.

The new cases come as national cabinet is due to meet on Friday to discuss the federal government’s decision to shut the borders to eight southern African states, despite Omicron being detected in countries around the globe.

The ban has been slammed by South African High Commissioner to Australia Marthinus Van Schalkwyk, who claims it discriminates against African nations and should be reversed immediately.

The requirement for travellers from other countries to quarantine for 72 hours is also on the agenda, as are discussions on whether visa-holders, such as skilled migrants and international students, should be allowed to come to Australia from December 15.

Victorian health authorities on Thursday announced they were investigating two suspected cases in the community in addition to two detected on Wednesday undergoing genome sequencing.

The cases were all picked up after PCR testing showed a gene dropout on the virus, potentially indicating the new strain.

Victoria’s first Omicron case involved an international traveller who travelled to Melbourne from the Netherlands via Abu Dhabi earlier this month.

The traveller, who was fully vaccinated, tested negative for coronavirus on December 4 before developing symptoms and returning a positive result to a second test administered on December 6.

On Wednesday, genomic sequencing confirmed the person had contracted the Omicron variant.

While authorities are taking a cautious approach to the new strain and extending quarantine for close contacts, Premier Daniel Andrews said on Thursday that Victoria was not aiming to wipe the variant out.

He said it was unlikely the government would tighten restrictions to guard against the strain as Victoria’s high vaccination rates meant the state had greater protection against the virus than other jurisdictions, such as Britain.

“We are not chasing an Omicron-zero strategy – that is not a smart thing to do, that will not be achieved,” he said on Thursday.

“This thing is in our country, it will be more widespread … there are always more cases than you know. The good news is that we are one of the most highly vaccinated countries and communities anywhere in the world.”

Victoria recorded 1206 cases of COVID-19 and two deaths on Friday, bringing the total number of active cases in the state to 11,145.

More than 3920 Victorians rolled up their sleeves to get vaccinated against COVID-19 at state-run clinics on Thursday, taking the total number of doses administrated at state facilities to almost 5 million, which means about 92 per cent of Victorians aged 12 and over have been fully immunised against the virus.

More than 25,000 close contacts of confirmed COVID-19 cases are isolating across Victoria.