Havana: The Trump administration is banning US flights to all Cuban cities except Havana in the latest move to roll back the Obama-era easing of relations, two people briefed on the matter said on Friday.

The people said the Transportation Department would announce that JetBlue and American Airlines flights to Santa Clara in central Cuba and Holguin and Camaguey in the island's east would be banned starting in December. 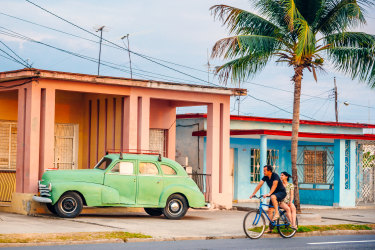 An old American car parked on a street of Havana, Cuba. The Trump administration is banning US flights to all Cuban cities except the capital.Credit:iStock

Flights to Havana, which account for the great majority of US flights to Cuba, will remain legal. Other banned destinations like the beach resort of Varadero do not currently have US carriers serving them.

The stated reason for the move is to prevent tourism to Cuba, which is banned by US law. But it is not clear how many people take the flights for tourism purposes. Many are used by Cuban-Americans visiting relatives in cities far from Havana by road.

"We plan to operate in full compliance with the new policy concerning scheduled air service between the US and Cuba," JetBlue said in a written statement. "We are beginning to work with our various government and commercial partners to understand the full impact of this change on our customers and operations in Camaguey, Holguin and Santa Clara."

American Airlines said it was reviewing the US decision. "We will continue to comply with federal law, work with the administration, and update our policies and procedures regarding travel to Cuba as necessary," a company statement said.

The Trump administration has been regularly tightening the six-decade-old embargo on Cuba in recent months with the stated purpose of cutting off income to the Cuban government and forcing it to cut ties to Venezuela and grant more human rights to Cuban citizens. Washington has barred US cruise ships visiting Cuba, sanctioned oil tankers moving petroleum from Venezuela to Cuba and permitted lawsuits against foreign companies profiting from their use of properties confiscated from Americans or from Cubans who later obtained American citizenship.

The measures have contributed to the Cuban government's chronic shortages of hard currency and were blamed for several weeks of fuel shortages on the island, but so far there is no indication that the Trump policy is having its desired effect. Cuba's security services continue to detain and harass dissenters and human rights groups say freedom of expression, assembly and other rights remain highly curtailed.

The Cuban and Venezuelan government remain tightly aligned and both have declared their intent to become even closer allies in the face of the Trump measures.