The man in charge of the search for missing four-year-old Cleo Smith has flown into Carnarvon where has met with the girl’s parents and visited the site she was last seen.

WA Police Superintendent Rod Wilde, who is in charge of the 100 officers making up Taskforce RODIA, arrived in the northern fishing and farming town on Thursday morning on day 13 of the investigation into Cleo’s disappearance.

Superintendent Wilde has met with Cleo’s mother Ellie Smith and stepfather Jake Gliddon, and has driven out to the Blowholes campsite about 70 kilometres north of Carnarvon where the girl was last seen in the early hours of October 16.

On Wednesday, forensic officers from WA Police were at the campsite and collected ash from old fires and attended the family’s home for the third time. 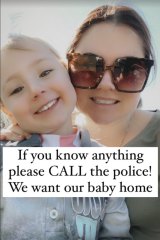 Ellie Smith posted an Instagram story on Thursday calling for people with any knowledge about her daughter’s disappearance to contact police.Credit:Instagram

Acting WA Police Commissioner Col Blanch said on Wednesday the police attendance at the family’s home was a standard investigation practice and Cleo’s parents were not considered suspects.

“I must be very clear so that people don’t make assumptions on this, that is standard practice in any investigation, we must do a thorough investigation,” he told Radio 6PR.

“Our job is to eliminate everyone that was at that campsite … and that really is the focus of the investigation at the moment.”

The arrival of Superintendent Wilde comes as Cleo’s school prepares for a prayer service at St Mary of the Sea Catholic Church in Carnarvon for Thursday night.

A statement from the school noted “all parents and community members are welcome to join the school and parish”.

“Our prayer service will be led by Fr Steve Casey and members of our school community,” it said.

Ellie Smith took to social media on Thursday with another impassioned plea for anyone who had seen her daughter to contact the authorities.

“If you know anything please call the police! We want our baby home,” she said in an Instagram story. 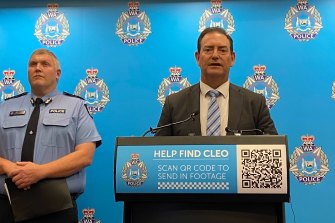 Cleo was last seen wearing a one-piece pink and blue butterfly outfit. She and her sleeping bag are both missing.

There is a $1 million reward on offer for information which leads to finding Cleo.