HSC students say they are living in ongoing anxiety with performance exams cancelled and the written exam timetable yet to be set by the NSW Education Standards Authority (NESA).

“I’d say we’ve been left in the dark a little bit just because the plans that [NESA] keep coming up with keep having holes,” said Sam Kosack, vice-captain of The Forest High School in Sydney’s northern beaches. “We’re living in this constant state of paralysis where we don’t really know anything.” 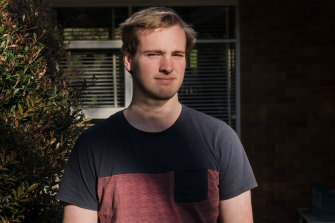 Sam Kosack has spent months preparing for works which will not be assessed centrally.Credit:James Brickwood

Written exams are due to start on November 9, but a revised exam timetable is not yet available. Major works are submitted in subjects such as art, music, drama and design and technology. They will be marked by their teachers rather than centrally.

Sam prepared three major works and performances for his final assessment and was crestfallen at the cancellation of these exams.

“When the COVID restrictions came in, [NESA] never actually cancelled [the major works and performance exams],” Sam said. “So we weren’t able to just give up. We had to find a way to keep practising. Now we don’t get to present what we worked really hard on. There is so much work that goes into that and then it’s just gone.”

Sam is part of a forum of school leaders on the northern beaches who are advocating for more consultation between NESA and HSC students. They want students to have the option to either sit their final exams or to have their marks determined by an estimation.

Freshwater High student and founder of the forum Hanna Clare approached a local councillor, Sarah Grattan, for help. She met with Pittwater state MP Rob Stokes and Warringah federal MP Zali Steggall to discuss how students could be involved in decisions.

“We’re crying out for help,” Hanna said. “How can [NESA] ignore a thousand student voices who are depressed mentally and not where they would normally be?”

A NESA spokesperson said: “HSC results services will be available to support students with inquiries”.

While Clare believed “it’s the exams that are creating stress, not university admissions,” both Cr Grattan and Clare said the group was advocating for all students to get into their preferred university course, with first year university marks to determine whether the student is fit to continue in their course, rather than their ATAR.

Students in local government areas of concern are also annoyed.

“We are a bit frustrated with the lack of communication,” said Stephanie Nwosu, school captain of Nagle College Blacktown.

Vice-captain Erika Yu said: “I do see that this is a really difficult situation [with COVID-19] and it is hard to make decisions when we are in this situation. Students feel as if decisions are being made blindly … I’ve lost my connection to be able to study or focus on certain things because I feel like there’s so much going on.”

Even in areas with low COVID-19 transmission rates, students say it would be unfair if the exams went ahead.

“We’re all feeling pretty burnt out and worn out. It’s not able to be a fair and equitable assessment for everyone,” said Maddie Lucas of Korowal School in the Blue Mountains, “if they cancelled the exams, I feel that is what most students are asking for.

“I just don’t think it’s worth the risk of getting ill or taking it home to our families.”

The timetable for written exams is due to be set this month.