Women have been warned to stay indoors after rumours of the stomach-churning threats for April 24 were released on the popular video sharing app. 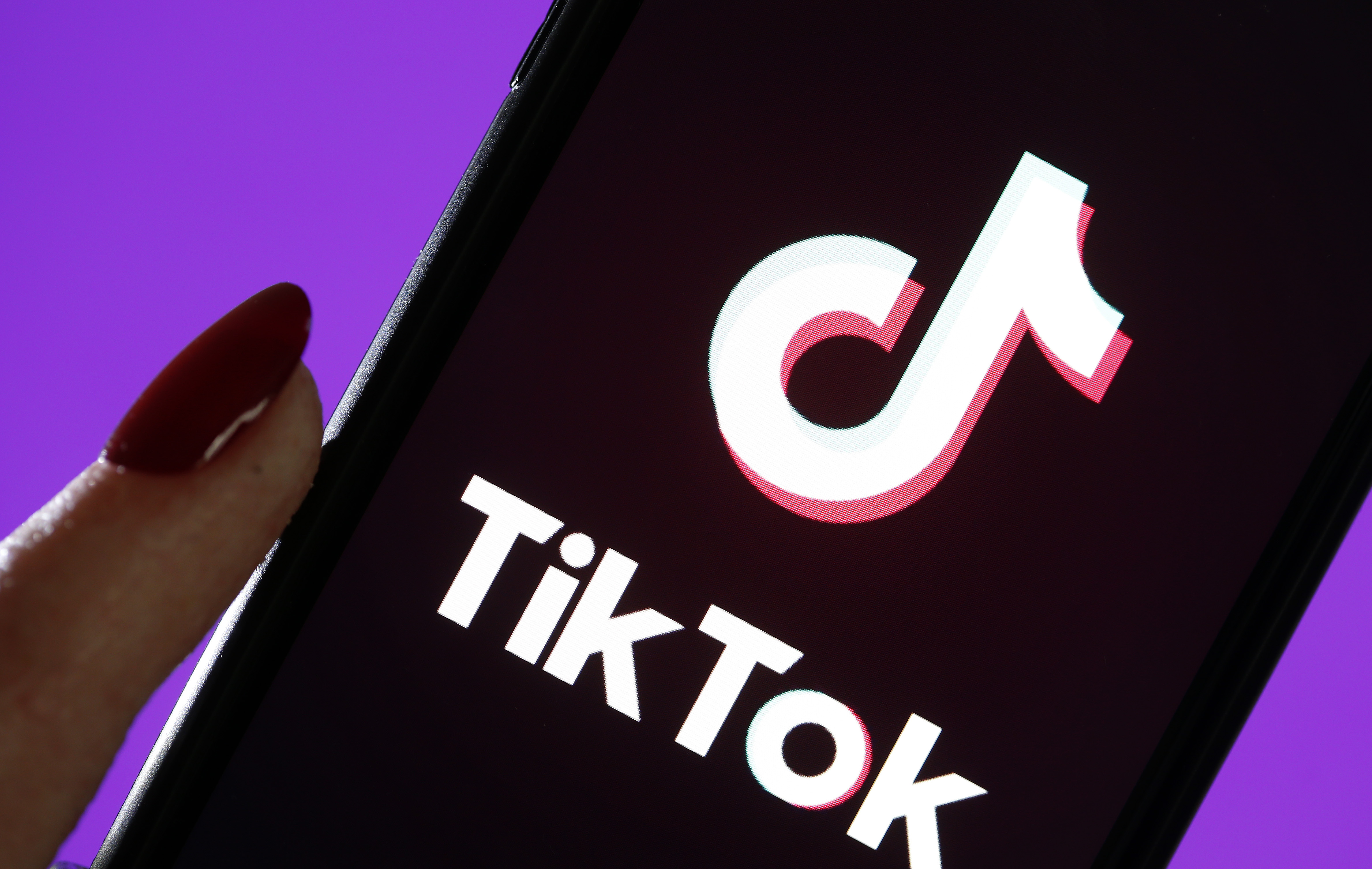 The alleged clip has been blasted by charities after the hashtag #April24 has been viewed more than 62million times, with hundreds of thousands of videos.

While the original video is believed to have been pulled down, or even not existed at all, it has sparked panic and warnings online.

Most posts are of people advising women to lock their doors and even stay at home all day, while others offer self defence tips.

One campaigner described the idea of a 'National Rape Day' – where laws are suspended and rape is legal – as "abhorrent".

Katie Russell, from Rape Crisis England & Wales, told The Sun Online: "Our understanding is that this disturbing so-called ‘trend’ on TikTok began as a hoax, and no evidence has been found of the original video threatening a national day of sexual violence in the USA.

"Regardless of its origins, or whether or not it was intended as a ‘joke’ at any point, the very concept of such a day is abhorrent and has caused many people, particularly women and girls, a great deal of understandable fear.

"The ‘trend’ will no doubt have also been extremely distressing for many, not least of all victims and survivors of rape and all forms of sexual violence and abuse who might have had vivid memories and flashbacks to past experiences triggered by this."

She continued: "Obviously, despite one particular piece of misinformation that has featured in this so-called ‘trend’, there is no day or moment where laws are suspended and rape is legal in the USA or anywhere else in the world.

"It should also go without saying that rape and all forms of sexual violence and abuse are traumatic experiences that can and do have wide-ranging and long-lasting impacts, and are never appropriate topics to ‘joke’ about.

"This episode reminds us of the ongoing need for us to collectively challenge, resist and dismantle the damaging, sexist ‘rape culture’ that still exists in our society." 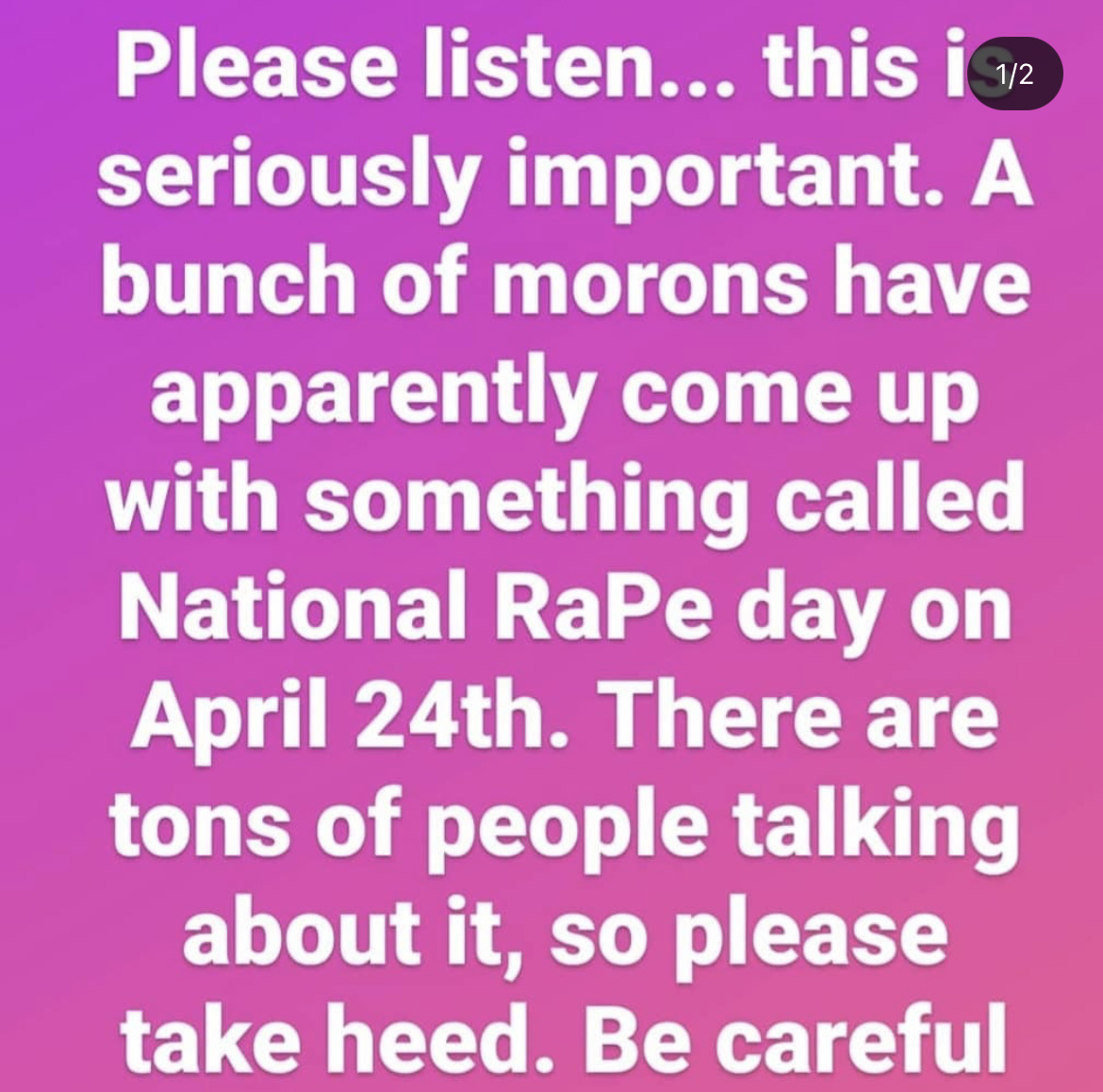 Andrea Simon, director of End Violence Against Women Coalition said: "Regardless of whether this is a hoax or not, we know the use of threats of sexual violence and derogatory comments about women’s appearance and bodies are very common forms of online abuse that women are subjected to.

"We wouldn't accept threats to rape offline and we can't ignore them online. They intend to intimidate and silence women in online spaces, causing real harm to individuals and to society and should never be tolerated.

"Tech companies and social media platforms have a duty to remove any such content, but currently this self regulation isn't good enough, with too much onus on women to take steps to protect themselves online instead.

"This needs to change, those using the internet to threaten and abuse women need to be identified and stopped."

Women’s Aid has slammed the online reports – calling it an “affront”.

Farah Nazeer, chief executive at Women's Aid, said: "We know from our work with domestic abuse survivors that rape and sexual assault are used by the perpetrator to belittle, humiliate, coerce and control.

"The government and all the institutions that shape our attitudes – as well as society as a whole – must work together to achieve long-term culture shifts. Whether this is a hoax or not is irrelevant – rape is an unacceptable violation, and it is no joke.

"That a ‘rape day’ could be conceived as a joke brings home the level of change we need in our society. It is an affront to every woman. It also demonstrates the urgent need for improved education on issues such as consent and healthy relationships.

"Every woman has the right to live a life free from abuse and violence."

Social media users have shared warnings about the unsettling videos.

One user, under the name la.tania.ftn2, said: "So I literally just saw a video on TikTok, and I had to make a video myself because most of my followers are women.

"And I need to make sure you guys are aware that there is a video going around on TikTok of disgusting men – rapists, child molesters, predators, just disgusting human beings, and they literally came up with a date to go around and rape women and children.

"You literally heard me right, women and children."

Regardless of its origins, or whether or not it was intended as a ‘joke’ at any point, the very concept of such a day is abhorrent and has caused many people, particularly women and girls, a great deal of understandable fear.

Another, who goes by prettyboy365, said: "April 24 has stupidly been made national rape day. Yeah, believe it, because it’s real.

"Unfortunately whoever created it is very low minded and sickened in the brain.

"There are actually sick people who will go through with this rape thing and hurt people, so it’s probably best to stay indoors.

"If you do go out, don’t go alone and keep self-defence items on you."

Rumours of the video have also spread on WhatsApp groups with students in Cornwall saying they are afraid to go outside.

A spokesperson for Falmouth University said any messages encouraging sexual violence were "abhorrent" but there was "no evidence" of a genuine threat.

Devon and Cornwall Police are looking into claims around the encrypted chat which has reportedly been discussing “Rape Day”.

A force spokesperson said: “Police have received a report of the existence of the WhatsApp group and are currently making enquiries regarding the credibility of the group.”

TikTok has claimed it cannot locate the original video but has asked users to report any content related to the sick day.

A spokesperson for the platform told The Sun Online: "The supposed 'National Rape Day' trend being reported upon is abhorrent and would be a direct violation of our Community Guidelines, and while we haven't seen evidence of this trending on our platform, our safety team remains vigilant and would remove any such content."

Attila Tomaschek, a digital privacy researcher at ProPrivacy, said: "Although it now seems unlikely that TikTok video actually exists, that the whole thing is just a horrible internet hoax, a type of sick joke, the concern it has caused is real.

"It’s apparent that most of the buzz is being created by users warning others about the purported plans for a national rape day and urging them to stay safe and remain vigilant, but the trend demonstrates how quickly something can spread on social media, and the real-life panic it can cause.

"It’s also a strong reminder for parents and educators of the sometimes harmful impact of social media, particularly where younger users are concerned.

"Remember teens can join TikTok from their thirteenth birthday as per the platform’s terms and conditions."

TikTok users are being urged to report any posts promoting the event or sexual assault of any kind.