The stuff of nightmares! Woman wakes up from nap to find three-foot snake slithering into bedroom of her house in Essex

A woman got the shock of her life when she woke up from a nap to find a three-foot snake slithering into her bedroom through the window.

The exotic reptile attempted to make its move while the woman was sleeping in her house in Basildon, Essex.

The startled woman dashed out of the bedroom, immediately closing the door behind the terrifying snake that had wrapped itself round her window.

After she had made a run for it, she rang the RSPCA who were on hand to deal with the creature that was poking its head through into the bedroom.

Rookie RSPCA officer Enola Evans, who had only started rescuing animals a month earlier, was sent in to remove the curious snake on October 8.

‘It’s not every day you get woken up by a snake trying to get into your bedroom through a window – the woman was terribly shocked,’ she said. 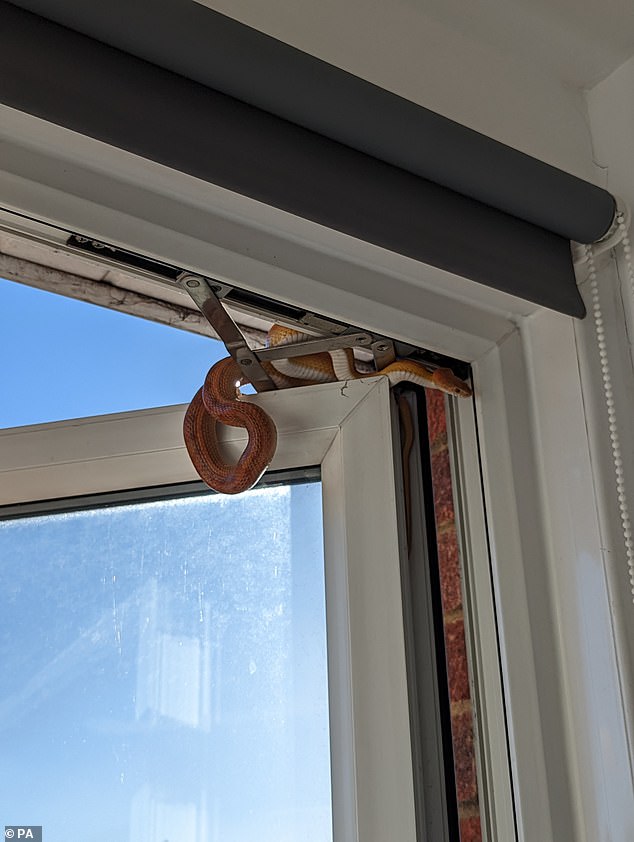 A woman woke up from a nap to find a three-foot snake slithering into her bedroom in Basildon, Essex

‘By this time, there was no sign of the snake at the window, so the resident gave me permission to search her bedroom, in case it had come inside and hidden somewhere warm.

Ms Evans explained how she thoroughly checked through the bed linen among other hiding places but could not track down the reptile.

She added:  ‘As the window had been open for so long, it was getting quite chilly in there, so I decided to shut it. That’s when I spotted something moving.

‘It was the snake, coiled around the window’s rim. He had been very well-hidden, so I was really pleased to find him.’

It was later revealed to be a corn snake – a non-venomous breed which can sometimes be kept as a pet. 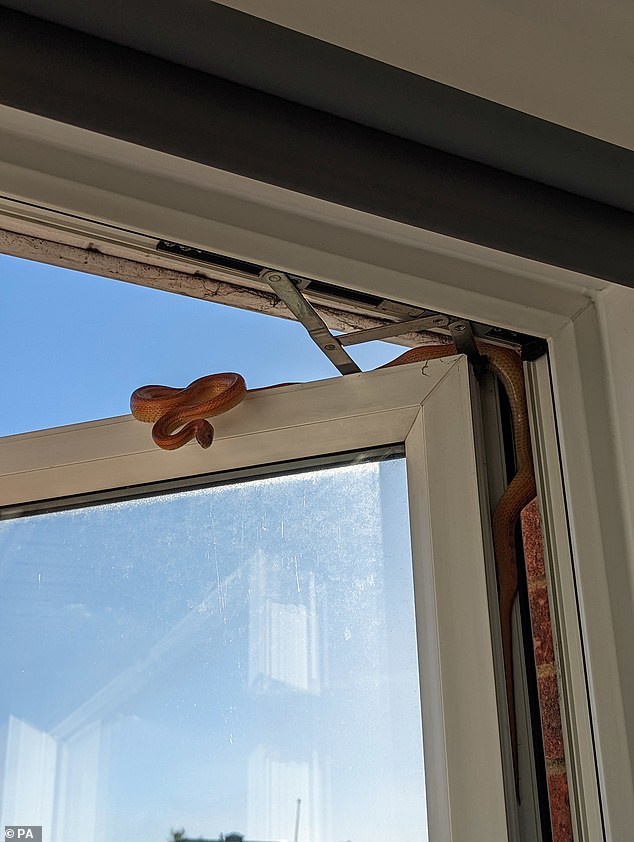 Rookie RSPCA officer Enola Evans, who had only started rescuing animals a month earlier, was sent in to remove the curious snake on October 8

The captured reptile was moved into a carrier before being transported to an expert boarding facility to be cared for until he could be reunited with his owner or put up for adoption.

Last year, the RSPCA received 1,219 reports about pet snakes in need of help, including many stray snakes.

A high number of calls came in during the summer months as snakes become more active during hot weather.

RSPCA scientific officer Evie Button said: ‘Snakes are excellent escape artists and will take the opportunity of a gap in an enclosure door, or a loose-fitting lid to make a break for it.’

Snake owners are urged to be vigilant, invest in an enclosure suitable for the species and make sure that enclosure is kept secure – and locked if necessary – when unattended.

Vibrant but not venomous: The corn snake

Their name derives from a tendency to be found near corn stores in farms where they feast on rodents hiding in the corn.

Corn snakes are not venomous and are believed to have a reluctance to bite. They are a relatively small snake from the Colubridae family and can grow up to six foot.

Their diet consists mainly of rodents such as mice and rats and they kill their prey by constriction.

Corn snakes are popular as pets with reptile lovers as they are known for being docile and thrive in captivity. They also appreciate attention and enjoy being handled by their owners.