The world follows Britain’s vaccine lead: Coronavirus jabs are rolled out across Europe with Italian nurse and a German who survived the 1918 flu pandemic the first in their countries to be protected

European countries have followed the UK’s lead in rolling out ‘new weapon’ vaccines in the fight against covid-19, as pensioners and medics line up to get the first shots.

The mass covid-19 vaccination drive begun on Sunday in countries including Italy, Spain, Germany and Slovakia as EU governments agreed on an official roll out date for the shots hoped to see off a pandemic that has crippled economies and claimed more than 1.7 million lives worldwide.

In Italy, the first country in Europe to record significant numbers of infections, 29-year-old nurse Claudia Alivernini was one of three medical staff at the head of the queue for the shot developed by Pfizer and BioNTech.

Receiving the vaccine at Rome’s Spallanzani hospital, the nurse said: ‘It is the beginning of the end … it was an exciting, historic moment.’ 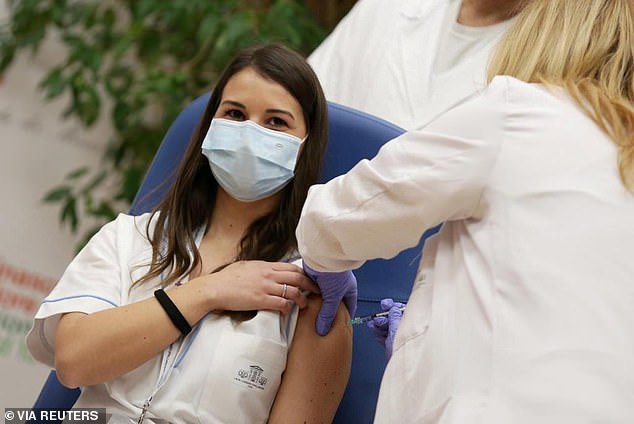 Ms Alivernini added: ‘Today I’m here as a citizen, but most of all as a nurse, to represent my category and all the health workers who choose to believe in science.’

The European Union with a population of 450 million people is trying to catch up with the United States and Britain, which have already started vaccinations using the Pfizer shot.

Germany launched its official Covid-19 vaccination campaign on Sunday, but the first jabs were actually given the day before, with Edith Kwoizalla, 101, becoming the first person in the country to be inoculated at a care home in Halberstadt, north Germany – she was born just after the start of the 1918 Spanish Flu pandemic.

Referencing the UK’s quick authorisation of the vaccine Tobias Krüger, Mrs Kwoizalla’s care home manager, told The Times: ‘Every day we wait is one day too many’.

In Spain the first person to be given the vaccine was 96-year-old Araceli Hidalgo, who was inoculated at her care home in Guadalajara, near the capital Madrid. 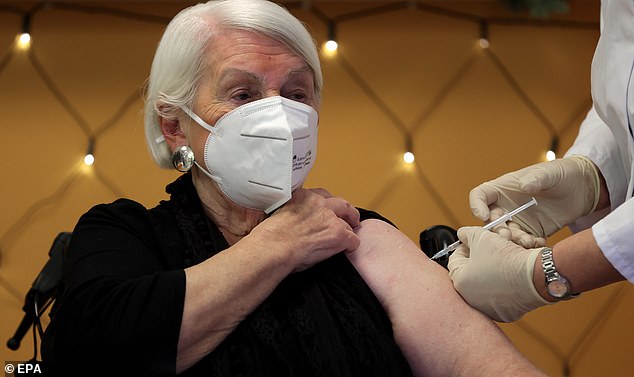 Ninety-two-year-old Gertrude Vogel becomes one of the first to be inoculated with a dose of the Pfizer-BioNTech Covid-19, coronavirus vaccine at the nursing home Riehl in Cologne, December 27 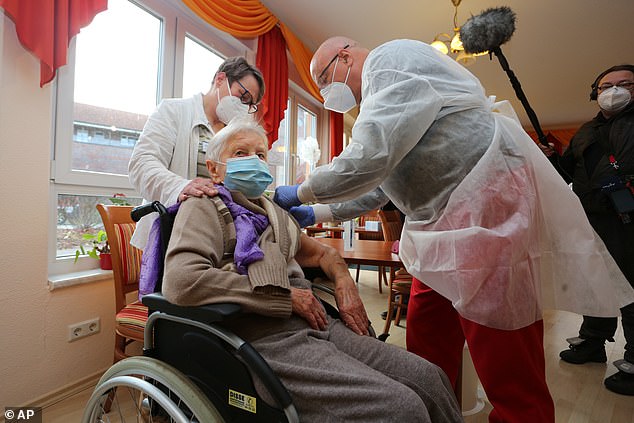 Upon being vaccinated Ms Hidalgo said: ‘Thank God. Let’s see if we can make this virus go away.’

The EU is due to receive 12.5 million doses by the end of the year, enough to vaccinate 6.25 million people based on the two-dose regimen. The companies are scrambling to meet global demand and aim to make 1.3 billion shots next year.

The bloc has secured contracts with a range of drugmakers besides Pfizer, including Moderna and AstraZeneca , for a total of more than two billion vaccine doses and has set a goal for all adults to be inoculated during 2021.

With surveys pointing to high levels of hesitancy towards the vaccine in countries from France to Poland, leaders of the 27-country European Union are promoting it as the best chance of getting back to something like normal life next year.

‘We have a new weapon against the virus: the vaccine. We must stand firm, once more,’ tweeted French President Emmanuel Macron, who tested positive for the coronavirus this month and left quarantine on Christmas Eve.

In Poland Ireneusz Sikorski, 41, a member of the public who was interviewed leaving church in the Polish capital of Warsaw, was sceptical. 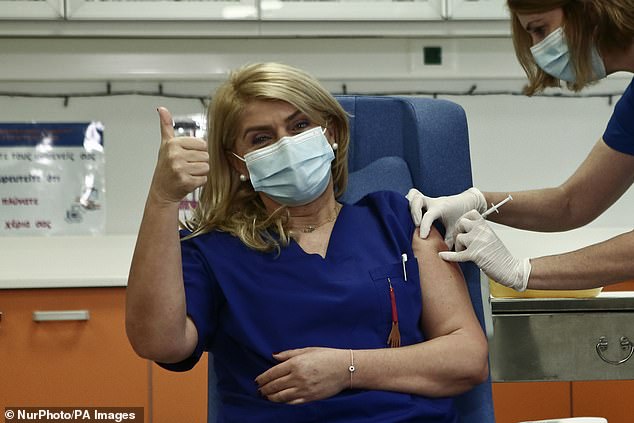 The first person to be vaccinated in Greece, Efstathia Kambissiouli, a nurse working in an intensive care unit at Evaggelismos hospital, Athens, on December 27

He said: ‘I don’t think there’s a vaccine in history that has been tested so quickly.

‘I am not saying vaccination shouldn’t be taking place. But I am not going to test an unverified vaccine on my children, or on myself.’

Elsewhere the distribution of the shot presented tough challenges due to the temperature requirements – the vaccine uses new mRNA technology and must be stored at about -70 degrees Celsius (-112Â°F).

In Germany, the campaign faced delays in several cities after a temperature tracker showed that about 1,000 shots may not have been kept cold enough during transit.

‘This is where the variations in temperature occurred. We are in contact with many authorities to provide advice, however it is up to them how to proceed’, a spokeswoman said.

Authorities in Bavaria’s Upper Franconia region, one area that had been affected, later said BioNTech had cleared the vaccines.

‘BioNTech has confirmed the quality of the vaccine shots,’ a spokeswoman said. ‘The vaccination programme can start (in our region).’ 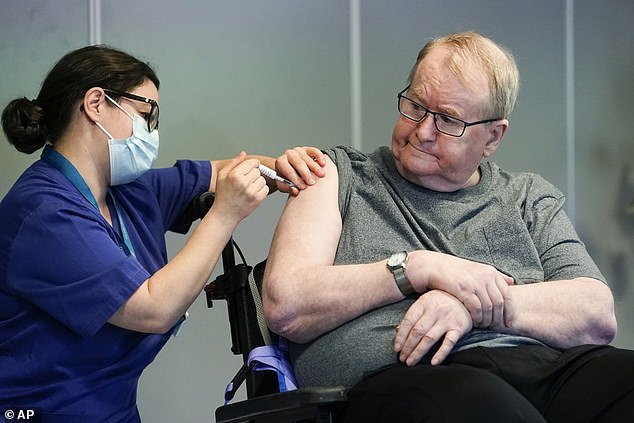 The Pfizer shots being used in Europe were shipped from its factory in Puurs, Belgium, in specially designed containers filled with dry ice. They can be stored for up to six months at Antarctic winter temperatures, or for five days at 2C to 8C, a type of refrigeration commonly available at hospitals.

Around 65 percent of Germans said they are prepared to be vaccinated, according to a poll carried out by YouGov for the German news agency DPA.

In Italy, solar-powered healthcare pavilions designed to look like five-petalled primrose flowers – a symbol of spring – sprouted in town squares as the vaccination drive kicked off.

Portugal has been establishing separate cold storage units for its Atlantic archipelagos of Madeira and the Azores.

The vaccination drive is all the more urgent because of the concern around new variants of the virus linked to a rapid expansion of cases in Britain and South Africa.

Cases of the UK variant have been detected in Australia, Hong Kong and in Europe, mostly recently in Sweden, France, Norway and Portugal’s island of Madeira. So far, scientists say there is no evidence to suggest the vaccines developed will be any less effective against the new variants.

While Europe has some of the best-resourced healthcare systems in the world, the scale of the effort means some countries are calling on retired medics to help while others have loosened rules for who is allowed to give the injections.

Vaccinations also started in Norway, which is not a member of the EU bloc.

‘I feel like a historical figure … almost like the first man on the Moon,’ said care home resident Svein Andersen, 67, as he received the country’s first shot in the capital, Oslo.

After European governments were criticised for failing to work together to counter the spread of the virus in early 2020, the goal this time is to ensure that there is equal access across the region.

But even then, Hungary on Saturday jumped the gun on the official roll-out by administering shots to frontline workers at hospitals in the capital Budapest. The Netherlands said it will not start vaccinating until Jan. 8.

Slovakia also went ahead with some inoculations of healthcare staff on Saturday and in Germany, a small number of people at a care home were inoculated a day early too.